Highlight reels on our major sports channels showcase the thrill of victory, but also the agony of defeat. Popular images of football may show a receiver picking his way across the field to make some incredible, spinning play. Sometimes it may show a Hail Mary pass, caught and celebrated. But more often than not, we are presented with the loud plastic crack and spine-jarring image of a 300-pound man being hurled end over end, and then shown again in slow motion.

These scenes are commonplace, even relished. They are reviewed constantly by broadcasters and replayed on YouTube--they have become popularized. But what about the bodies involved? There is a head, neck, and spinal cord contained within and adjacent to each football helmet, connected to a very real person. Long-term invisible injuries can include the frequent and relatively minor stresses placed on heads and necks that do not have the draw of the ugly, televised hits. As the scientific community learns more about the nature of traumatic brain injuries, there is more cause than ever to be concerned for the well-being of athletes. 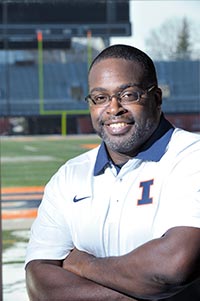 Kevin Jackson, a senior research scientist at the Beckman Institute, concerns himself with athletes and these injuries. His current project is to figure out a way to more effectively treat head and neck injuries that happen during athletic activity and to help rethink the picture of the athlete-as-human in general. As he develops treatments for concussions, he wants to broaden the scope of concern.

There is more to a concussion than the drama you might see on television, Jackson explains. “It's a multifaceted disease/problem,” said Jackson, who is looking for a multifaceted approach to fixing it.

Jackson joined the Beckman Institute on a project in 2009 that investigated the effects of cooling the heads and necks of athletes in order to reduce the very real and deleterious effects of both large concussions and smaller instances of traumatic brain events.

“We were working on technology for soldiers,” said Jackson, “and I realized that a lot of what we were researching fit directly into athletics.”

Since 2009, he has been working for Dr. Huan (John) Wang, a neurosurgeon/researcher at Carle Foundation Hospital, and a group of scientists to develop a device to accomplish exactly that. They have adapted technology originally intended for wounded soldiers to create a specialized cooling helmet capable of inducing a safe and regulated hypothermia to the skull and neck of an injured player. This device operates on the theory that lowering the temperature of injured neurons and axioms in the brain will help to alleviate damage caused by both routine and extraordinary traumas to the head and neck. These studies have shown more than promising results. Small-scale trials have shown a clear and definite correlation between reducing head and neck temperature and reducing the negative effects of a traumatic brain injury.

Jackson approaches his career with the passion of an athlete and the critical eye of a scientist because he has been one or the other for a good portion of his life. He manages to neatly and effectively cross the gap between the practical and the academic, balancing both with precision.

Always ambitious, Jackson enjoyed a successful career as a running back on the University of Illinois football team and simultaneously earned a bachelor's degree from the Department of Animal Sciences at Illinois in 1994. He earned his Ph.D. in 2003.

“Science was my first love, before anything else,” said Jackson. “My mother and sister both had diabetes,” he explained, “my passion for science comes from life.”

Jackson's scientific pursuits come from a deeply rooted interest in helping the people around him: individuals who could benefit from the life-changing work of scientists and researchers.

In the world of athletics, Jackson is able to channel his desire to make a difference into his work with the Beckman Institute. Jackson has the ability to navigate the stresses and physical demands of being a successful high school and collegiate athlete, and he brings this competence to his research projects. Jackson has found that these insights have been enormously helpful.

“I have ideas of what [I] can do from an athletic standpoint, of what's needed in athletics,” Jackson said. He can effectively communicate the needs of the athletic departments to the scientific community, and vice versa. Jackson believes that his greatest strength lies in his “sitting on both sides of the fence,”--as a researcher and a former athlete.

But his insight extends further than that.

“Beckman offers the opportunity to have everything under one umbrella. I can walk down the hall and talk to someone with a background in neuroscience, or in engineering.” --Kevin Jackson

There is a long-standing debate within the scientific community as to the specific effects of a concussion on the brain of an athlete.

“We know that there is going to be some cognitive impairment down the line,” Jackson says, “but the trick is figuring out if we can catch it earlier and if there are other things paired with it.”

“Other things” could include factors in an athlete's life that could skew our understanding of the way brain injuries may impact future cognitive functions. The life of a high-caliber athlete, like any person, can present wide variety of variables. Jackson's main focus now is putting a system in place to understand and track them, longitudinally. He is calling for accountability in the way we consider the mental health of our athletes.

Jackson has described working within the community of the Beckman Institute as being essential to the production of both functional technology and good science. It is this hands-on stuff that he loves, facilitated by what he calls “a hub of multidisciplinary ideas.” This is the environment he has found within the research community at Beckman and on which he continues to rely to provide a stimulating and productive structure to the research he conducts.

“Beckman offers the opportunity to have everything under one umbrella,” said Jackson. “I can walk down the hall and talk to someone with a background in neuroscience, or in engineering.” Working in such an environment is not only convenient, but entirely necessary for the kind of work that he believes needs to be done.

Jackson has expanded the work that he began working on 14 years ago expanding it into something much greater. His approach is holistic and longitudinal. It now extends past the immediacy of treating a traumatic brain injury on the field and after practice, to considering the long-term health and well-being of these athletes many years later. It is about “get[ting] the trust of the athletes” and building a mental and physical framework that they can reference and draw upon for years after they leave sports.

Jackson is currently coordinating with Carle Foundation Hospital, the Beckman Institute, and the U of I Division of Intercollegiate Athletics to produce the long-term and in-depth studies needed for his projects to be a widespread success. Jackson wants to take the concept of brain injury – its treatment, the publicity surrounding it, and our understanding – and blow it wide open. He's trying to change the game, and he's succeeding.