Bretl to present on feb. 6

The spring 2014 Director's Seminars will begin on Feb. 6 featuring Tim Bretl, aerospace engineering professor and faculty member of the Artificial Intelligence Group. The presentation will start at noon in Beckman room 1005, and lunch will be provided.

Principles of Optimality in Robotics and Neuroscience

Optimality is a principal that is useful not only for generating robot motion, but also for modeling the behavior of systems with which robots interact. I will discuss two examples, one in robotics and the other in neuroscience.

First, by application of geometric optimal control, I will show how to establish an appropriate configuration space for robotic manipulation of canonical “deformable linear objects” like an elastic rod (e.g., surgical suture wire) or a planar elastic kinematic chain. This result leads to simple algorithms for manipulation planning that are easy to implement and that work well in practice.

Second, by application of a new framework for inverse optimal control of differentially flat systems, I will show how to identify and characterize “invariant outputs” of human locomotion given observations of unimpaired human walkers. This result leads to a method of control design for an active prosthetic leg that reduces the time required for parameter tuning by a clinician from four hours to four minutes. 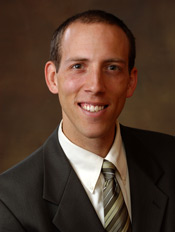 Timothy Bretl received his B.S. in engineering and B.A. in mathematics from Swarthmore College in 1999, and his M.S. in 2000 and Ph.D. in 2005 both in aeronautics and astronautics from Stanford University. Subsequently, he was a postdoctoral fellow in the Department of Computer Science, also at Stanford University. Since 2006, he has been with the University of Illinois at Urbana-Champaign, where he is an associate professor of aerospace engineering and a research associate professor in the Coordinated Science Laboratory. He received the National Science Foundation Faculty Early Career Development Award in 2010.