Julianne Fox, former U of I graduate student and now aircraft accident analysis expert, believes the flight crew were, for reasons unknown, unaware of  the warning signals that would have been sounding during Asiana Airlines Flight 214’s erratic descent.

The crash of Asiana Airlines Flight 214 on July 6 that killed three and injured more than 180 was possibly caused by inattentional blindness of the flight crew and could have been avoided, says Julianne Fox, University of Illinois and the Beckman Institute alumna.

Julianne Fox graduated in 1996 from the U of I with a master’s in human factors and worked in Art Kramer’s lab at Beckman. She is now an expert in aircraft accident analysis and a certified commercial pilot.

Fox was called upon to analyze a possible reason why the flight crew didn’t land properly, which she said could have been because of what is called inattentional blindness, or the failure to notice an unexpected stimulus, even if it is completely obvious, when other attention-demanding tasks are being performed.

“There are a lot of accidents where there have been very salient cues available to crews that have been missed,” Fox said.

Fox helped design the cockpit for Boeing, including 777. Because of her familiarity with how the plane would react to dangerous conditions, she asks why this lapse in pilot control could have happened. What distractions might have caused inattentional blindness, when there would have been many obvious warning signs on the instrumental panel and outside, alerting the crew of the imminent danger? Fox asks.

“When they were low and slow, they would have had a lot of information telling them something’s wrong,” Fox said. “At 500 feet, if they weren’t on speed and on path, they should have been executing a go-around. So we’ll be asking, why didn’t that happen? Where was their attention, and why was it on anything other than flying the airplane?”

The National Transportation Safety Board (NTSB) is investigating exactly why those basic skills of airmanship broke down among the very experienced flight crew. For more information, see Fox’s interview. 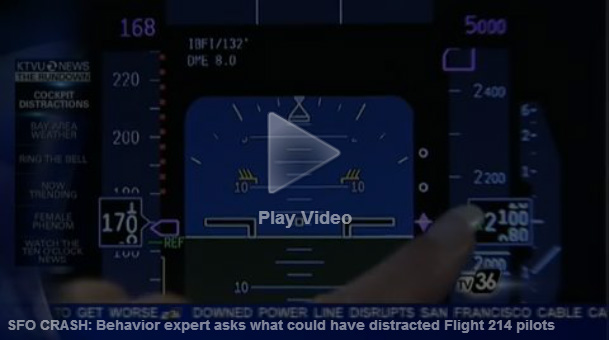