Gabriel "Gabi" Popescu, the William L. Everitt Distinguished Professor in Electrical and Computer Engineering and a faculty researcher at the Beckman Institute, died on June 16, 2022, while visiting his hometown Prundu, Romania. 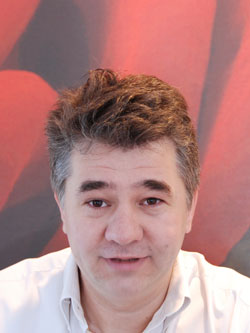 Gabriel "Gabi" Popescu. Gabriel Popescu, the William L. Everitt Distinguished Professor in Electrical and Computer Engineering and a faculty researcher at the Beckman Institute for Advanced Science and Technology, died on June 16, 2022, while visiting his hometown Prundu, Romania.

Popescu joined the University of Illinois Urbana-Champaign in 2007 as an assistant professor following a post-doctoral appointment with the G. R. Harrison Spectroscopy Laboratory at M.I.T. At UIUC, he established and directed the Quantitative Light Imaging Laboratory, or QLI Lab, at the Beckman Institute. Dr. Popescu held academic appointments in the Electrical and Computer Engineering and Bioengineering departments and was an affiliate of the Holonyak Micro & Nanotechnology Lab.

"Gabi's passing will leave a huge hole in the fabric of life around ECE and beyond," shared Bruce Hajek, Department Head for Electrical and Computer Engineering. "His sense of humor, adventure, and curiosity was infectious. I was so fortunate to know him. The entire community is in shock and mourning, but over time it will work to support and comfort those closest to Gabi, inspired by our cherished memories of him."

"We are shocked and in grief over this great loss," said Rashid Bashir, dean of The Grainger College of Engineering. "Gabi will be missed greatly. He was larger than life, always enthusiastic and energetic, a scientific giant in the field, and a great friend to many of us. I, myself, collaborated with him, and together we published many papers. Our hearts are with his family and children as we work through this very difficult time together."

Prof. Popescu's scholarly work has been highly impactful, focusing on transforming biomedicine into a quantitative science through advances and innovations in optic science and label-free microscopy. Among his many discoveries at the QLI Lab, he enabled quantitative measurements of the phase of light to pass through biological structures, providing previously inaccessible biological information without using dyes or stains that would perturb the dynamic biological processes the researcher is trying to measure.

Prof. Popescu is an internationally recognized researcher and thought leader in optics and biophotonics. In 2011 he wrote the seminal textbook, "Quantitative Phase Imaging of Cells and Tissues," and edited another. He authored 185 journal publications, shared his wisdom through 230 conference presentations, issued 32 patents, and gave 220 invited talks, a testament to his global industry impact. Popescu co-founded and chaired a new conference at the international SPIE Photonics West, a conference that attracts more than 100 papers per year and has grown to be one of the largest at Photonics West.

His interdisciplinary research has been driven and supported by grant funding from several agencies, including the NIH, NSF, the Grainger Foundation, and Agilent Technologies. Most recently, he received two NIH R01 grants totaling more than $4.5 million to foster research with colleagues across campus and other institutions. Prof. Popescu was also one of five principal investigators on a 5-year $25 million grant from NSF to explore Emerging Behavior in Cellular Systems.

“This is such a terrible and tragic loss,” said Dr. Bruce Tromberg, Director of the National Institute of Biomedical Imaging and Bioengineering at the National Institute for Health. “Gabi brought people together with a brilliant technical vision and adventuresome spirit; he was an inspiration and truly a ‘bright light’ of our biophotonics community.”

He served as an Associate Editor of Optics Express and Biomedical Optics Express and an Editorial Board Member for the Journal of Biomedical Optics and Scientific Reports. Other leadership roles included serving as a reviewer at NIH and NSF, public engagement opportunities at the Planetarium at Parkland College, and outreach and STEM advocacy to K-12 students in the local Champaign-Urbana community.

Recognizing that ideas and innovations cannot be impactful if they remain in the lab, Prof. Popescu was an acclaimed entrepreneur who founded Phi Optics, Inc., a start-up company that commercializes quantitative phase imaging technology. The company's board of directors shared that "not only was Gabi a well-known scientist, but he was also a visionary leader who successfully launched a company to bring his technology to market. There are now teams worldwide that use Phi Optics instruments to push forward the frontiers of research, drug discovery, and diagnostics/treatments. While Gabi was a phenomenal scientist, he was an even better colleague and person. His passion for learning, knowledge, and improvement has become one of the core principles of Phi Optics. He will be greatly missed." 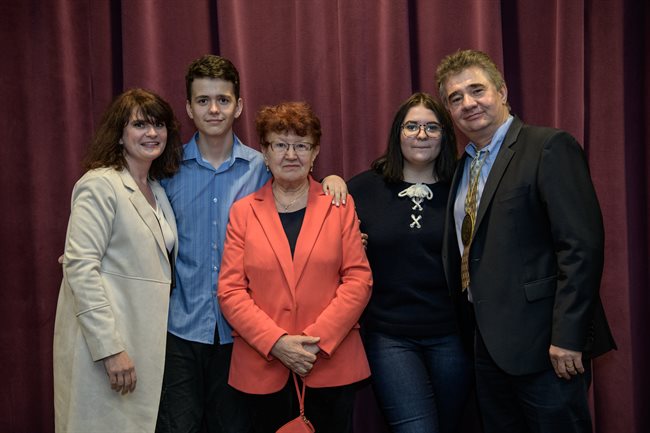 Prof. Popescu was a Fellow of SPIE, the International Society of Optics and Photonics; OSA, the Optical Society of America; and AIMBE, the American Institute for Medical and Biological Engineering. He was also a Senior Member of IEEE, the Institute of Electrical and Electronics Engineers. In addition, he received the 2022 SPIE Dennis Gabor Award in Diffractive Optics.

He earned his B.S. and M.S. in physics from the University of Bucharest in 1995 and 1996, respectively, and obtained his M.S. in optics in 1999 and his Ph.D. in Optics in 2002 from the School of Optics/CREOL (now the College of Optics and Photonics), University of Central Florida.

Gabi is survived by his wife, Catherine Best, a research assistant professor of bioengineering, his daughter Sophia Popescu, 15, his son Sorin Popescu, 13, and his mother, Maria Popescu. Arrangements are incomplete but will be added to this article when finalized.

Read the original article posted by the Department of Electrical and Computer Engineering: https://ece.illinois.edu/newsroom/news/remembering-gabi-popescu