New polymer property could give accessible solar power a boost

Researchers at the Beckman Institute are the first to observe structural chirality, a biological property important to photosynthesis, emerging in achiral conjugated polymers. Their discovery could help enhance flexible solar cell design and increase access to affordable renewable energy.
By Jenna Kurtzweil 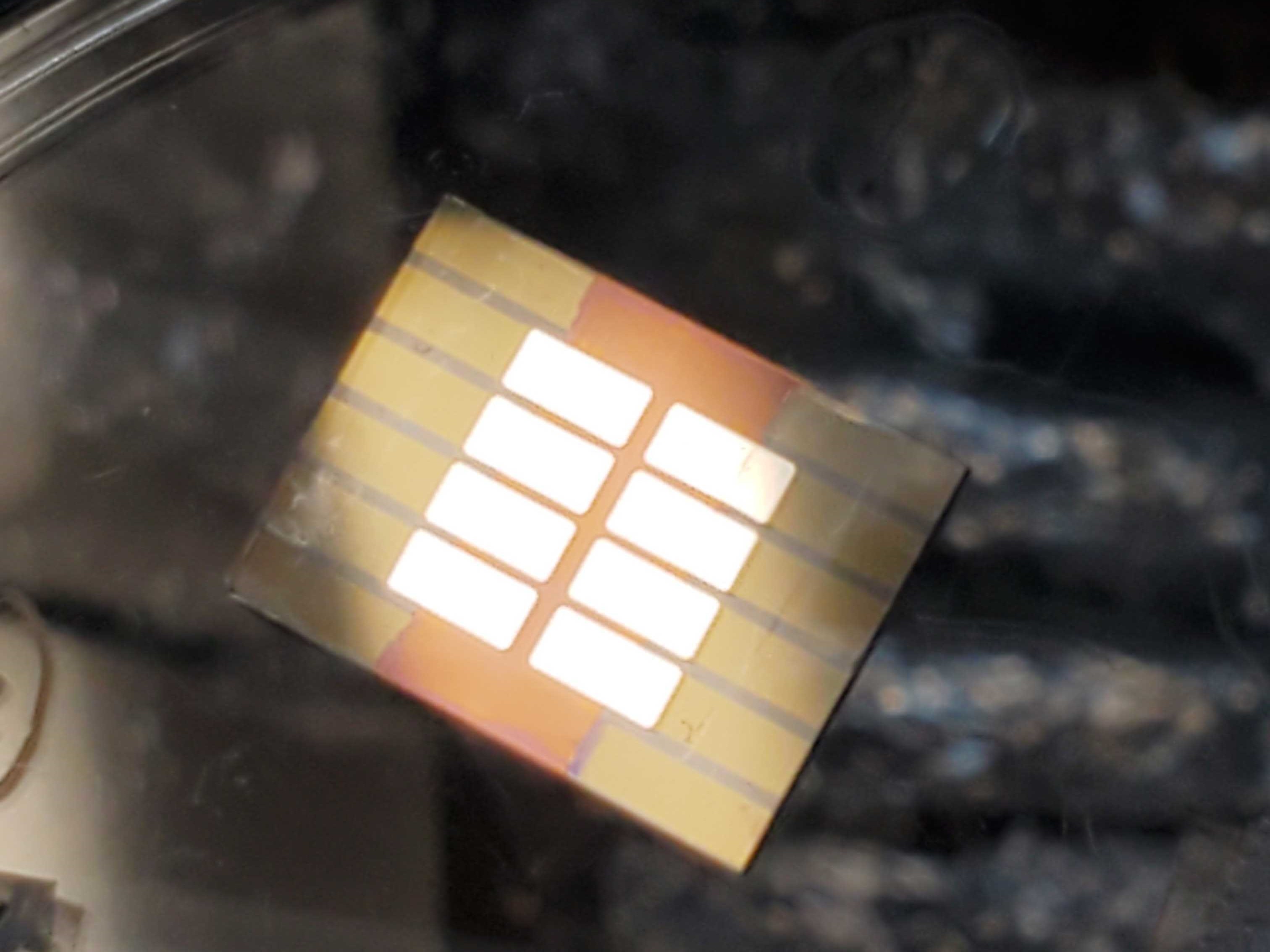 Organic solar cells like the one pictured are emerging as a viable solution to meet the nation's growing energy demand. Credit: Azzaya Khasbaatar, a graduate student in the Diao Group.

Lightweight as a window cling and replicable as a newspaper, organic solar cells are emerging as a viable solution for the nation's growing energy demand.

Researchers at the University of Illinois Urbana-Champaign are the first to observe a biological property called chirality emerging in achiral conjugated polymers, which are used to design flexible solar cells. Their discovery could help enhance the cells' charge capacity and increase access to affordable renewable energy.

DNA's coiled architecture is recognizable to many as a helix. Structurally speaking, DNA and other helical molecules are classified as chiral: asymmetrical such that superimposition onto a mirror image is impossible. The term originates with the Greek word for hand, which is also an example. Picture a left handprint on a sheet of paper, followed by a right handprint directly on top. The two prints do not neatly align; your hand, like its DNA, is chiral. 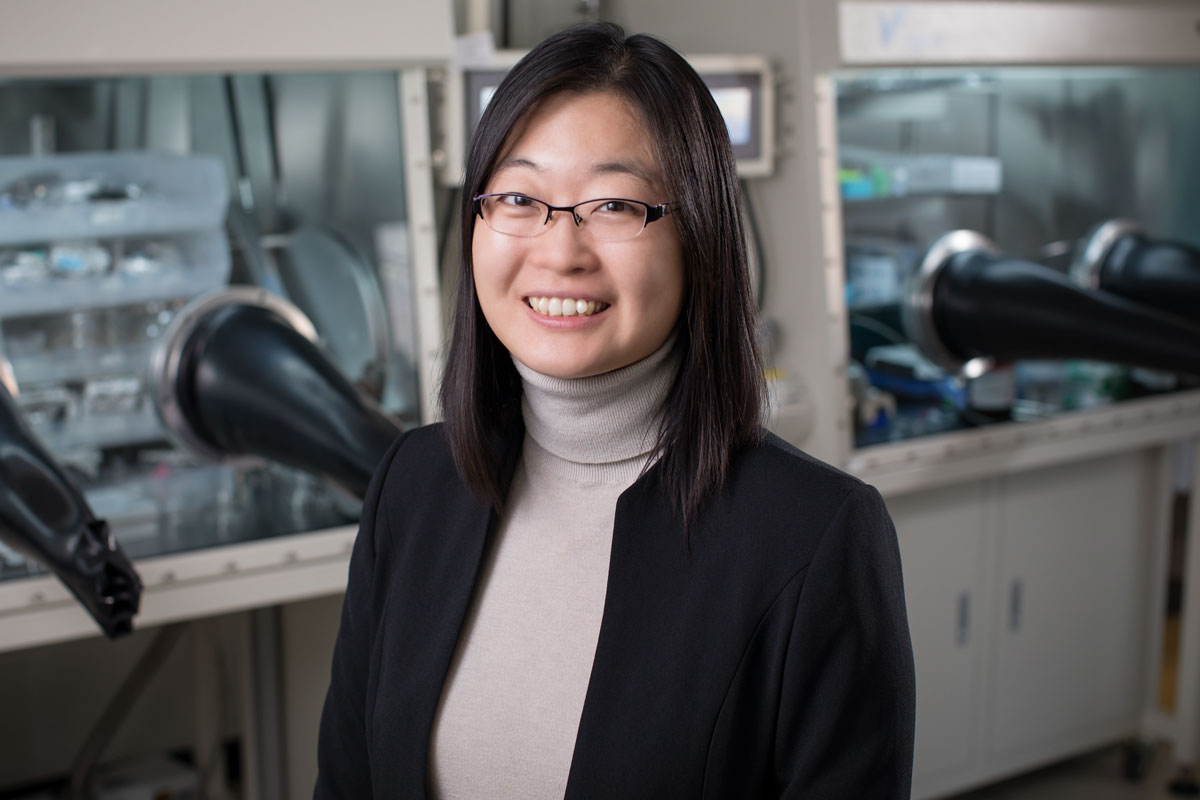 Ying Diao, an associate professor of chemical and biomolecular engineering, is the study's principal investigator. From hands and feet to carbohydrates and proteins, chirality is twisted into humans' genetic makeup. It’s also abundant in nature and even enhances the chemical reaction that drives photosynthesis.

“Chirality is a fascinating biological property," said Ying Diao, an associate professor of chemical and biomolecular engineering and the study's principal investigator. "The function of many biomolecules is directly linked to their chirality. Take the protein complexes involved in photosynthesis. When electrons move through the proteins’ spiraled structures, an effective magnetic field is generated that helps separate bound charges created by light. This means that light can be converted into biochemicals more efficiently." 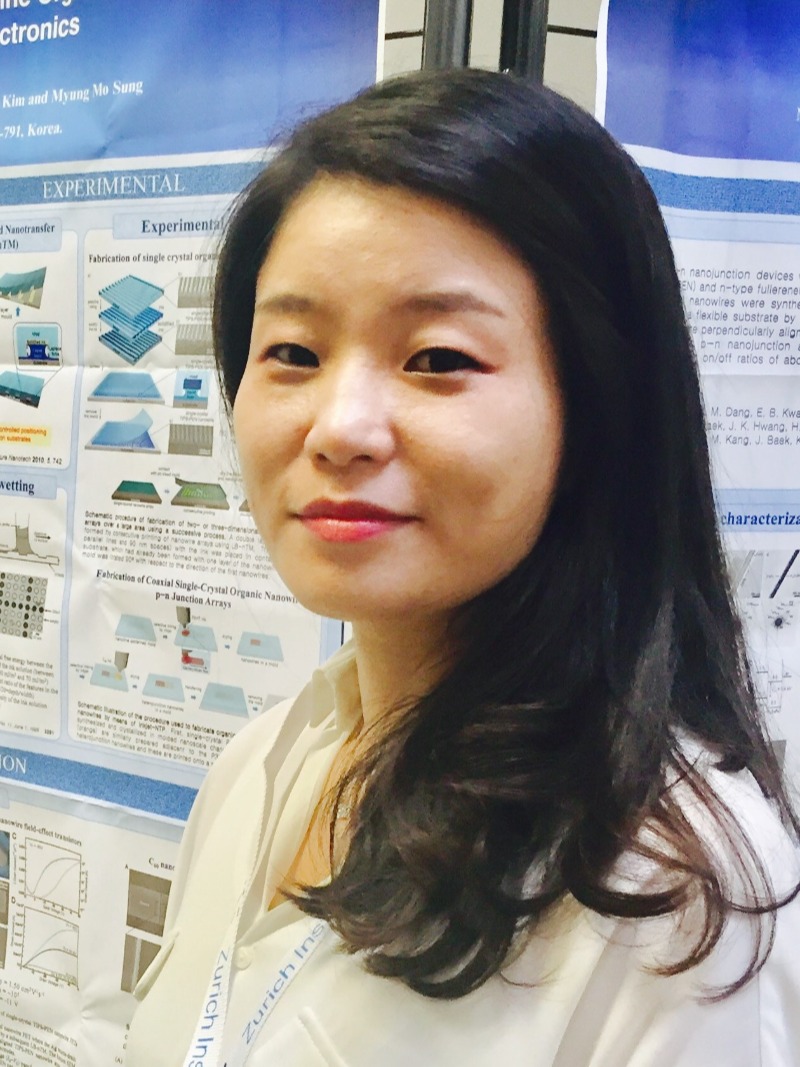 Kyung Sun Park, a postdoctoral researcher, is the lead author of this study which appears in Nature Communications.Their paper appears in Nature Communications and introduces new opportunities for research at the convergence of biology and electronics. For the first time, scientists can apply chiral structure to the myriad materials that require achiral conjugated polymers to function.

In particular, solar cells: paper-thin solar panels scaled down to the size of a computer screen. Composed entirely of organic materials, the flexible cells are transparent and lightweight enough to cling to a bedroom window. They're also rapidly manufacturable with solution printing, the process that's used to print newspapers.

In-situ cross-polarized optical microscopy capture of a polymer solution in a moving, drying meniscus, which was created by sandwiching the polymer solution between two glass slides. The video shows the dark solution phase (top-left) and the bright mesophase (bottom-right). The elliptical mesogenic domains emerge from the solution phase and coalesce to form a rope-like texture. Credit: Kyung Sun Park. “Organic solar cells can be printed at high speed and low cost, using very little energy. Imagine that one day, solar cells are as cheap as newspapers, and you could fold one up and carry it around in your backpack,” Diao said.

Conjugated polymers are crucial to the cells’ development and design.

“Now that we’ve unlocked the potential for chiral conjugated polymers, we can apply that biological property to solar cells and other electronics, learning from how chirality enhances photosynthesis in nature. With more efficient organic solar cells that can be manufactured so quickly, we can potentially generate gigawatts of energy daily to catch up with the rapidly increasing global energy demand,” Diao said.

But renewable energy is just one of many fields to benefit from the union of chirality and conjugated polymers. Diverse applications might include consumer products like batteries and smart watches, quantum computing, and bio-based sensors that can detect signs of disease in the body. 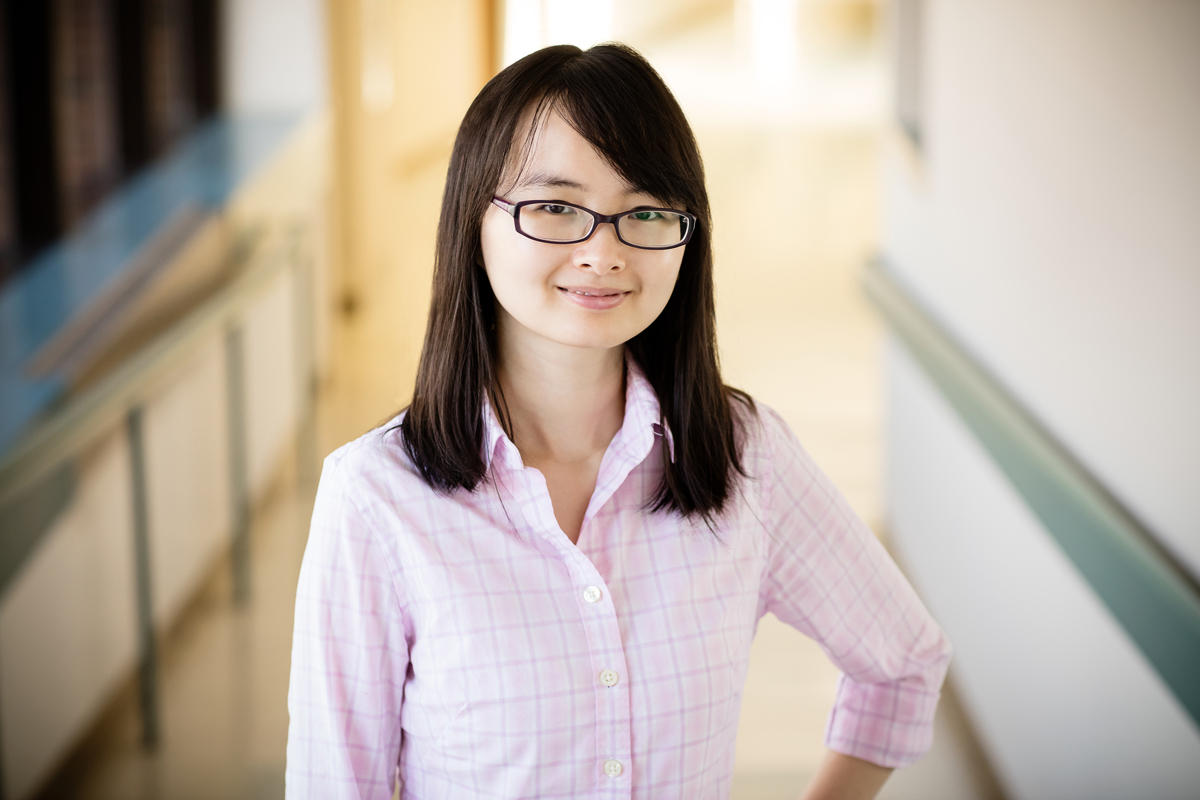 To arrive at their discovery, the researchers first combined achiral conjugated polymers with a solvent. They then added the solution, drop by drop, to a microscope slide. As the solvent molecules evaporated, leaving the polymers behind, the solution became more and more concentrated. Soon, the compressed achiral polymers began self-assembling to form structures. 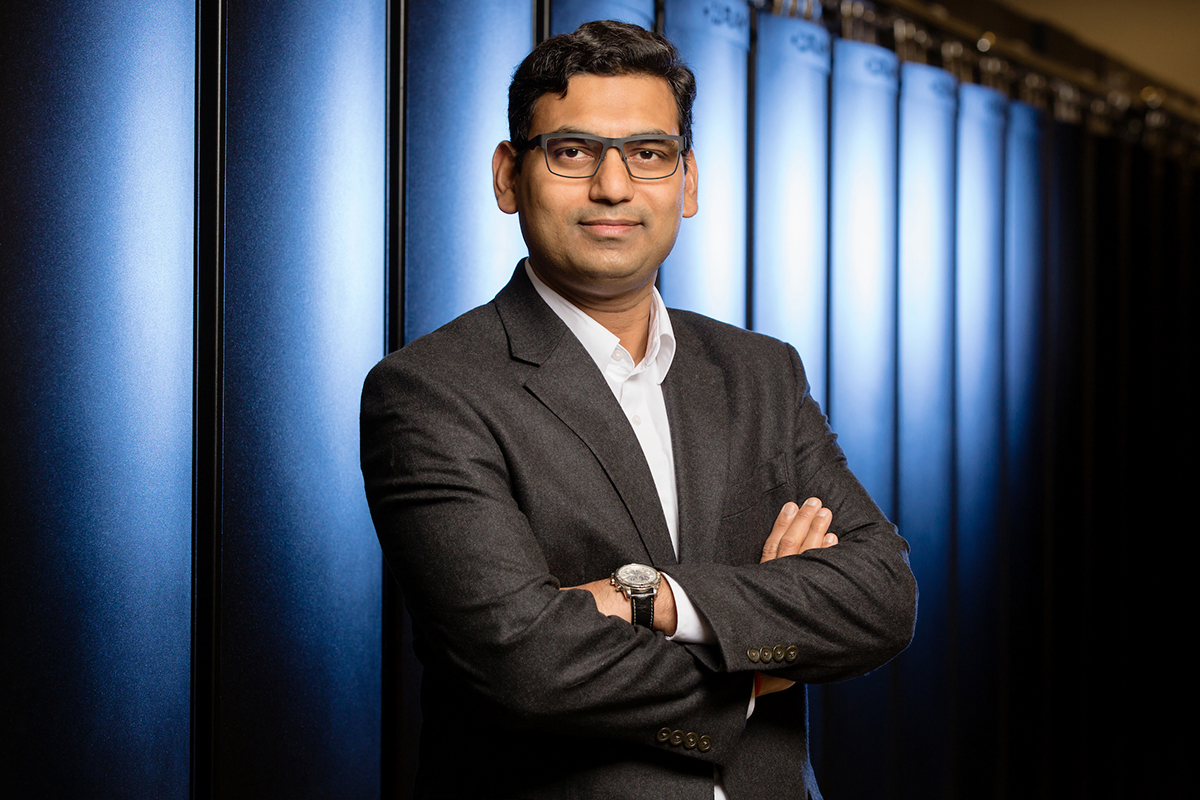 Diwakar Shukla, an associate professor of chemical and biomolecular engineering, introduced molecular dynamics simulation to complement the advanced microscopy used to complete this research.Molecular self-assembly is not an unusual phenomenon. As the solution’s concentration increased, however, the researchers observed that the achiral polymers were not assembling into achiral structures as expected. Instead, they were forming helixes.

“Through the lens of a microscope, we observed the polymers’ twisted shape and helical structure. The facilities in Beckman’s Microscopy Suite helped make this discovery possible,” said lead author and postdoctoral researcher Kyung Sun Park.

Further, the researchers found that the chiral-to-achiral structural evolution does not occur in a single step, but in a multistep sequence where smaller helixes assemble to form increasingly complex chiral structures.

Advanced molecular dynamics simulations helped the researchers confirm the molecular-scale steps in this sequence that cannot be seen with the naked eye.

“Molecular dynamics simulation was instrumental to this research. Equally important was the Beckman Institute’s collaborative environment that encouraged merging molecular dynamics with microscopy and chemistry,” said Diwakar Shukla, an associate professor of chemical and biomolecular engineering and a coauthor on this study.

The authors declare no competing interests.