Martin Ostoja-Starzewski, an affiliate faculty member at the Beckman Institute for Advanced Science and Technology and a professor of mechanical science and engineering, was elected to the European Academy of Sciences and Arts on the basis of his cross-continental collaboration. His current research seeks to replicate and exceed the finesse achievable with knives during medical surgeries with autonomous electrodes.
By Samantha Jones Toal 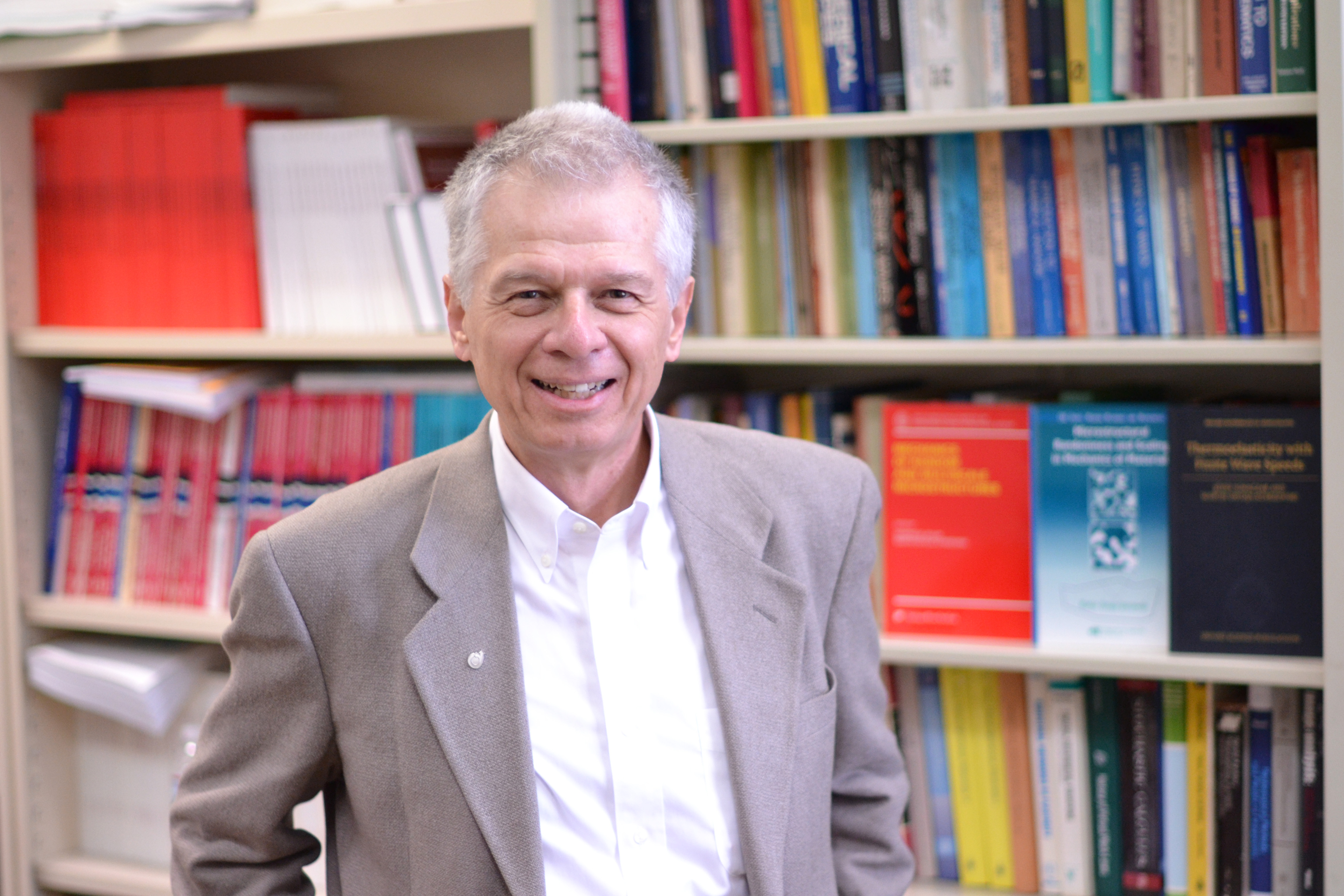 Martin Ostoja-Starzewski, an affiliate faculty member at the Beckman Institute and a professor of mechanical science and engineering, has been elected to the European Academy of Sciences and Arts.

Martin Ostoja-Starzewski, an affiliate faculty member at the Beckman Institute for Advanced Science and Technology and a professor of mechanical science and engineering, has been elected to the European Academy of Sciences and Arts.

“It’s a great honor to be elected to a group of transnational, interdisciplinary scientists,” he said. “Besides the prestige in the first place, I’m excited to provide input to other members of the academy in discussions revolving around contemporary topics.”

The EASA is a non-governmental, European association committed to promoting scientific and societal progress. Founded in 1990 as a learned society, the members are leading scientists, artists, and practitioners of governance. Ostoja-Starzewski was nominated by colleagues in Europe on the basis of his scholarship, editorial activities, and collaboration with European institutions and European centers of scholarship.

Ostoja-Starzewski earned his Ph.D. in mechanical engineering from McGill University in 1983, and has published four books and more than 200 papers since. Specializing in theoretical and applied mechanics, his publications include theoretical topics and experimental research, also requiring advanced computations. Applications of his work include both natural and manufactured materials. His major project at the Beckman Institute focused on a magnetic resonance imaging and magnetic resonance elastography-based finite element model of traumatic brain injury.

Currently, he is working on a novel project that uses finely controlled electrodes to replicate and even exceed the finesse achievable with knives during medical surgeries. Although electrosurgery has been widely implemented, autonomous electrosurgery has not been previously explored.

Using an autonomously guided electrode, which is an electrical conductor, instead of a knife during surgery has ample benefits at home and abroad.

“Imagine being able to conduct surgeries in Antarctica and in space, all with the guidance of images,” Ostoja-Starzewski said, referencing scientists who may be situated long-term in unforgiving geographical terrain — or even a rocket ship.

Ostoja-Starzewski and his colleagues are discovering that switching the tool needed for soft-tissue surgery can enable remotely and autonomously conducted surgeries with superior dissection and coagulation (which guarantees blood stoppage) on the basis of images alone. Further, the project should have significant implications for minimally invasive, robotic surgery of organs with cancerous tumors, and its ability to track safe cancer margins could help prevent the spread of infected cells.

“The thought is to replace the haptic feedback provided to the surgeon through a knife in soft tissue cutting by the multi-sensor feedback to enable electrode cutting adaptation, with the benefit of minimizing tissue damage and sealing the tissue right away to stop bleeding. If you’re cutting out a cancerous tumor with infected cells, it’s critical those cells don’t enter the bloodstream and spread. An electrode surgery would help prevent that from happening," he said.

Ostoja-Starzewski is a co-PI on this project, which is conducted in collaboration between The Grainger College of Engineering at UIUC, Carle Foundation Hospital, and the University of Illinois at Chicago.

While Ostoja-Starzewski continues to work on this project, it's the decades-long commitment to scientific research that landed him among the EASA’s approximately 2,000 eminent scholars and practitioners, which includes 35 Nobel Prize winners. The Academy is located in the ancient St. Peter’s Abbey in Salzburg, Austria.

According to the Stanford standardized citation indicators, Ostoja-Starzewski is ranked No. 3 in career-long impact in his home unit, the Department of Mechanical Science and Engineering. For the single-year 2020 impact, he is ranked No. 2 in MechSE and No. 50 at UIUC. His first book, "Microstructural Randomness and Scaling in Mechanics of Materials," written in 2007, led to the Worcester Reed Warner medal of the ASME in 2018. His second book, "Thermoelasticity with Finite Wave Speeds," written in 2010, appeared in the prestigious Oxford Mathematical Monographs series published by Oxford University Press. His third book, "Tensor-Valued Random Fields for Continuum Physics," written in 2019, was published in the Cambridge Monographs on Mathematical Physics by the Cambridge University Press; this series began in 1975 with the classic piece from the late cosmologist Stephan W. Hawking, "The Large Scale Structure of Space-Time." Ostoja-Starzewski's fourth book, "Random Fields of Piezoelectricity and Piezomagnetism," written in 2020, was co-authored by his most recent Ph.D. student, Amirhossein Amiri-Hezaveh.