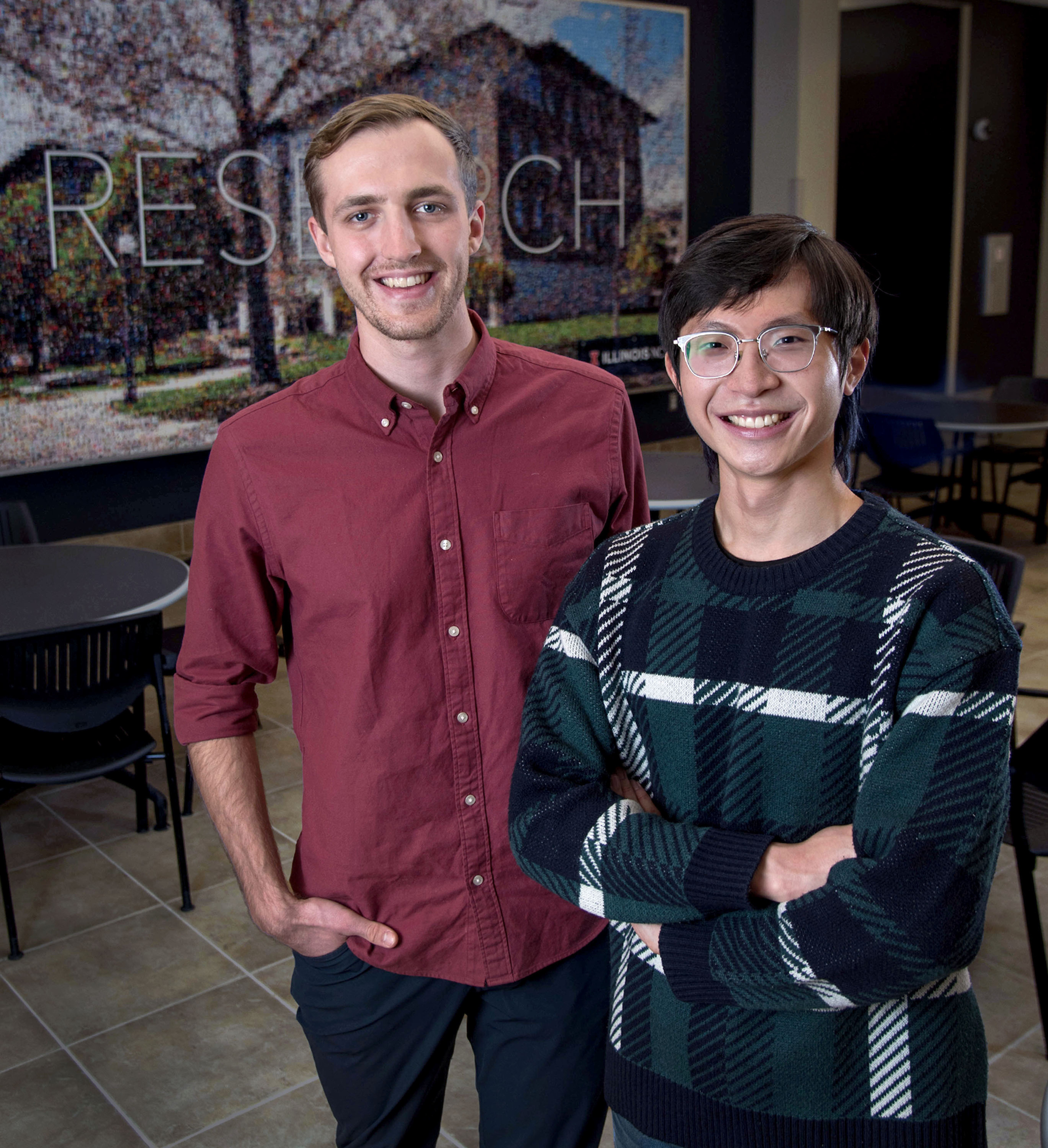 Their task — predicting the properties of randomly sequenced copolymers — seemed daunting at first. The team members ultimately achieved success by working together.

“Working collaboratively is very important,” said Kim, who is advised by Beckman faculty members Nick Jackson and Charles Schroeder. “The world’s gotten more diverse, it’s very important to work with different people using our common languages, not jargon. It was very important to transmit our ideas easily, so that they could understand.”

Read more about Kim and the Challenge I team in an article written by Emily Jankauski and Maddie Weller in the Department of Materials Science and Engineering at UIUC: "Grad students Kim, Day push past comfort zones to win AI Hackathon in Molecular Dynamics." 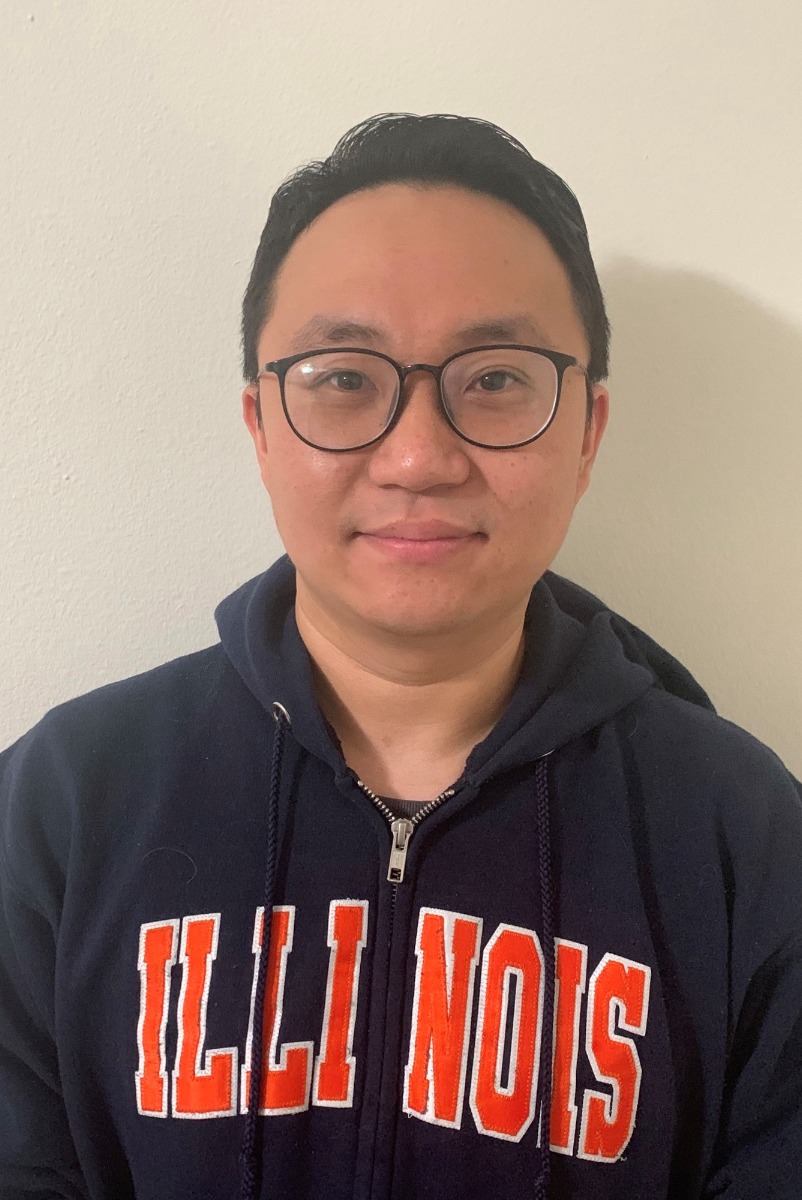 Hyun Park, a student researcher at the Beckman Institute and the Center for Biophysics and Quantitative Biology at UIUC, is a Challenge II winner of Argonne National Laboratory's AI Hackathon in Molecular Dynamics. When Park read the description of the AI Hackathon’s second challenge, a single word made him hesitate.

“Polymers were the focus area for this challenge. Specifically, applying artificial intelligence to the molecular dynamics of polymers. I do study molecular dynamics, but it’s a slightly different flavor. My focus is on biomolecules in living organisms, like proteins,” said Park, who is affiliated with the Center for Biophysics and Quantitative Biology at UIUC.

Luckily, his hesitation was brief. Proteins or no, Park’s background in molecular dynamics decidedly primed him for success.

At Beckman, Park works alongside biochemistry professor Emad Tajkhorshid to study how computer-generated simulations can predict how atoms and molecules move, change, and shift over time. Recently, his own interests have shifted to include AI; he enjoys using deep learning to discover hidden molecular patterns that a biased human eye could easily overlook.

Competitors in Challenge II received a twofold test of their mastery in molecular dynamics and applied AI.

First, they were challenged to coax a complex, 2D deep-learning model into managing a 3D dataset. Then, the model was applied to predict the molecular dynamics of a polymer throughout its structural transformation — from a disordered configuration that Park calls “polymer soup” to an organized structure of perfectly placed plates. The term for this plated structure is lamella, which inspired the team’s name, AI Lamellar.

Park's team included Boyuan Yu, a graduate student at UIC; Ziyi Kou, a doctoral student in the UIUC School of Information Sciences; and Ajay Uppili Arasanipalai, a student at UIUC.

As the four members of AI Lamellar designed, deliberated, tried, and tried again to arrive at a suitable solution, Park — like Kim — realized that the road to victory began with encouraging collaboration between his teammates.

“Our team was made of students with different skill sets, some in deep learning and some in molecular dynamics. I felt confident navigating both areas, and I helped communicate between those with both specialties to help us all come together,” he said.

The students’ own dynamism proved their greatest strength as they drew inspiration from supercomputing simulations, the intricacies of AI, and the precision of medical imaging to craft a creative solution that reflected their own interdisciplinarity.

When Park first considered entering the AI Hackathon, his background in biomolecular dynamics gave him pause. However, a common thread between molecular dynamics and medical imaging — the science of peering into the human body — tipped the scales in favor of his team.

“Medical imaging was an inspiration to us. The polymers we’re trying to look at move, and we want to know more about how they move and how they grow. In medical imaging, clinicians use MRI scans and CT scans to track how tumors and blood vessels move and grow within the body,” Park said.

The team took a chance on a medical imaging model called 3D U-Net to wrangle their 3D dataset and predict the polymer’s dynamics.

“In medical imaging, many images are stacked in multiple dimensions to create the best image. We used that same concept to successfully predict the molecular dynamics of our polymer. We didn’t even know if it would work, at first,” Park said.

The AI Hackathon was jointly hosted by the University of Illinois at Chicago, Argonne National Laboratory's Data and Science Learning Division, the Argonne Leadership Computing Facility, and the Center for Artificial Intelligence Innovation at the National Center for Supercomputing Applications.