Beckman Institute researchers developed a small-molecule probe that allows for rapid and non-invasive visualization of disease progression in Wilson’s disease and some metastatic cancers. As a diagnostic tool, this probe could reduce the need for invasive procedures, such as biopsies, to diagnose and monitor diseases.
By Kyle Shelton

Biopsies are one of the most common methods for diagnosing cancer and monitoring disease progression. However, these invasive procedures involve surgical removal of the affected tissue and can lead to infection or false negative results.

Chan and his team are creating small-molecule probes that, when excited by laser light, emit sound waves that help them non-invasively detect the biomarkers of harmful substances in the body. Recent work successfully targeted excess copper in tissue, similar to that found in the livers of Wilson's disease sufferers. Watch to learn more!Researchers at the Beckman Institute for Advanced Science and Technology developed a non-toxic, small-molecule probe that provides real-time visualization of disease progression without the need for surgical intervention.

Their paper, “Activity-based photoacoustic probe for biopsy-free assessment of copper in murine models of Wilson’s disease and liver metastasis,” is published in Proceedings of the National Academy of Sciences

The probe was developed by researchers in Jefferson Chan’s lab at the University of Illinois Urbana-Champaign. Chan, an associate professor of chemistry, researches the development of activity-based chemical probes for in vivo disease diagnosis and monitoring using photoacoustic imaging. PA imaging uses a “light in, sound out” strategy where laser pulses are applied to a tissue of interest while readout comes in the form of ultrasonic waves — just like in ultrasound imaging. The result is a safe, non-invasive diagnostic tool that overcomes the limitations of other techniques like MRI and PET imaging.

“PA imaging has struck a balance between sensitivity, imaging depth, and affordability,” Chan said. “It allows us to develop these activity-based sensing molecules to look at species that are dysfunctional or dysregulated in diseases like cancer.”

Chan’s research group previously developed PA probes to detect molecules and ions that are up- or down-regulated in diseased tissues, such as nitric oxide in cancer progression.

The PA probe developed in this work, PACu-1, binds copper (I) ions. This reduced form of copper engages in cellular reactions that generate reactive oxygen species, highly reactive chemicals that can cause irreversible damage to cells. 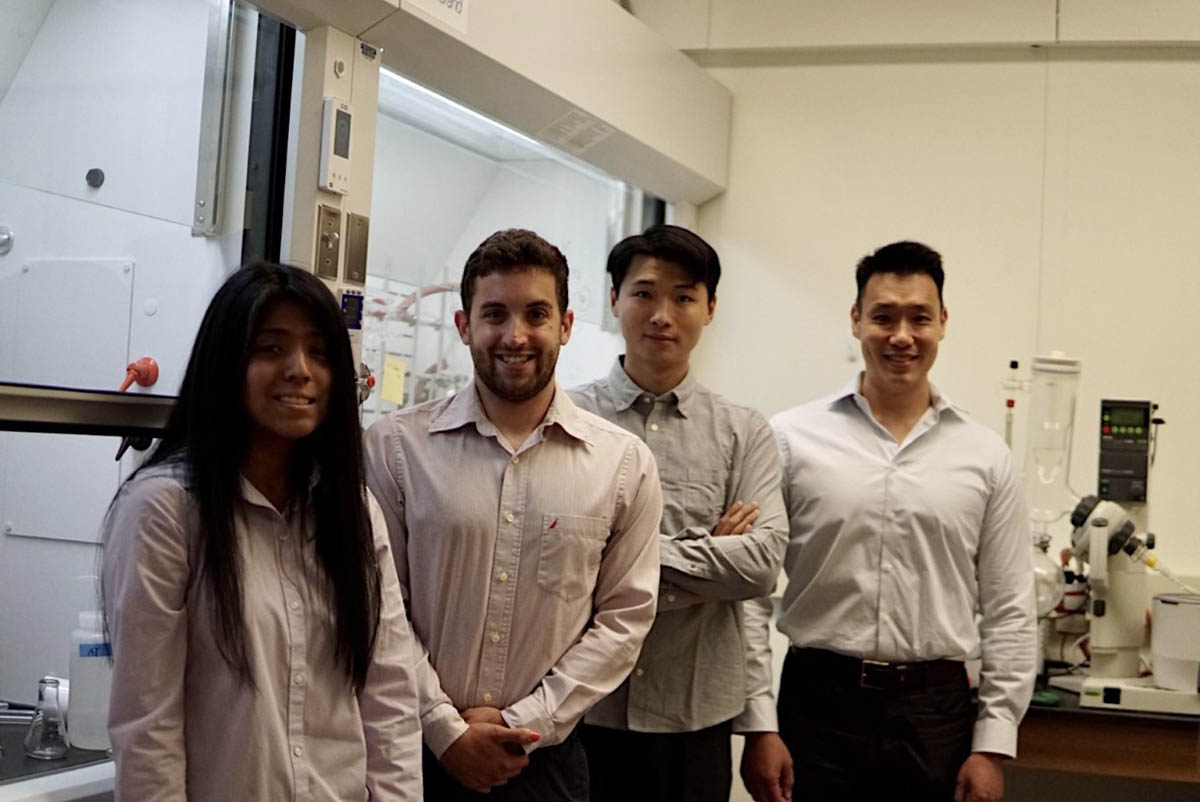 Members of the research team involved in the development of PACu-1. From left: Melissa Lucero, Joseph Forzano, ShengZhang Su, and Jefferson Chan.

“Our probe looks specifically at the pool of dysregulated copper ions that will cause reactive damage. The ability to track these ions using a non-harmful probe gives us more information than, for instance, detecting total copper levels in a urine sample,” Chan said.

Dysregulation of copper (I) ions is a hallmark of a hereditary condition known as Wilson’s disease, a genetic disorder that causes copper to accumulate in the liver.

“Wilson’s disease is caused by a mutation to a copper exporter present in the liver and eventually, if not treated, leads to liver failure,” said Melissa Lucero, a graduate student studying chemistry who envisioned and synthesized PACu-1.

In a pair of blind experiments, Lucero and colleagues used PACu-1 to identify mice with Wilson’s disease from a randomly selected group of sick and healthy mice. In a separate study where 50% of the mice studied had Wilson’s disease, PACu-1 exhibited significantly higher PA signals when administered to the mice with dysregulated copper levels, identifying the Wilson’s disease group with 100% accuracy.

PACu-1 and PA imaging offer an accessible alternative to biopsies, primarily because the signals generated by PACu-1 can be detected by the same instrumentation used for ultrasound imaging.

PA images of mouse livers, comparing a mouse with Wilson's disease (left) to a healthy mouse (right). A brighter spot indicates higher concentrations of copper (I) ions localized in that region.Chan envisions a future where clinical application of PA imaging will be driven by imaging technology development.

“We now have wearable devices that can look at a single circulating melanoma cell, mountable setups for brain imaging in moving animals, and so on. This technology will allow surgeons to do what other imaging modalities can’t, which is collect molecular-level information at clinically relevant depths,” Chan said.

Lucero and colleagues performed an extensive safety evaluation of PACu-1, which primarily localizes to the liver. The probe exhibits no cytotoxicity and does not significantly impact liver function.

“Safety was a key consideration from the start,” Chan said. “If a patient already has a compromised liver, the last thing we want to do is introduce a molecule that will cause more damage.”

In the future, Lucero and Chan hope to combine PACu-1 with other PA probes developed by the Chan group to look at complex mechanisms involved in aging. They anticipate that using their PA agents in combination will shed light on a host of aging-related ailments. For example, a PA probe recently synthesized by Lucero tracks cellular levels of glutathione, the cell’s so-called master antioxidant.

“Lots of diseases can be viewed as premature forms of aging,” Chan said. “Our hope is that these probes can serve as companion diagnostics to predict which patients should be matched to a particular therapy.”