After authoring a viral Twitter thread discussing an anecdotal link between the COVID-19 vaccine and heavy periods, Kathryn Clancy, an associate professor of anthropology, launched a survey to examine the relationship between the two.
By Meg Dickinson 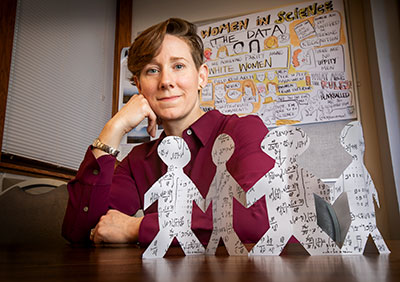 Kathryn ClancyAfter authoring a viral Twitter thread discussing an anecdotal link between the COVID-19 vaccine and heavy periods, Kathryn Clancy, an associate professor of anthropology, launched a survey in hopes of examining the relationship between the two. Within a week, she and collaborator Katharine Lee, a postdoctoral scholar in the division of public health sciences at Washington University, had received 19,000 responses.

The duo hasn’t yet published research using the responses, but Clancy told journalist Tara Haelle that she received dozens of emails from people who tried to report such symptoms but were dismissed.

“A lot of the work of feminist biology is testing assumptions,” Clancy said. “One of the big assumptions I noticed was a lot of people who were telling me they had these experiences were saying, ‘I did talk to my doctor and my doctor said, “Oh, it’s just stress.” Or I did try to tell somebody and they laughed at me about it.’ My feminist biology spidey sense tingles when some doctor tries to tell a menstruator in particular that their lived experience isn’t real.”

Clancy reiterated that their work isn’t meant to spread fear. While she doesn’t offer medical advice, “I would get vaccinated again in a second and would have 10 more heavy periods to be protected against COVID-19.”

“We are looking at something that’s fairly transient,” she told Haelle. “You don’t have to be terrified if you get one really wonky period or two. That’s why it’s important to study it.”

Editor's note: the article associated with this work can be found at https://elemental.medium.com/lack-of-data-on-covid-19-vaccines-and-periods-inspired-two-feminist-scientists-to-learn-more-b4c29395fb5