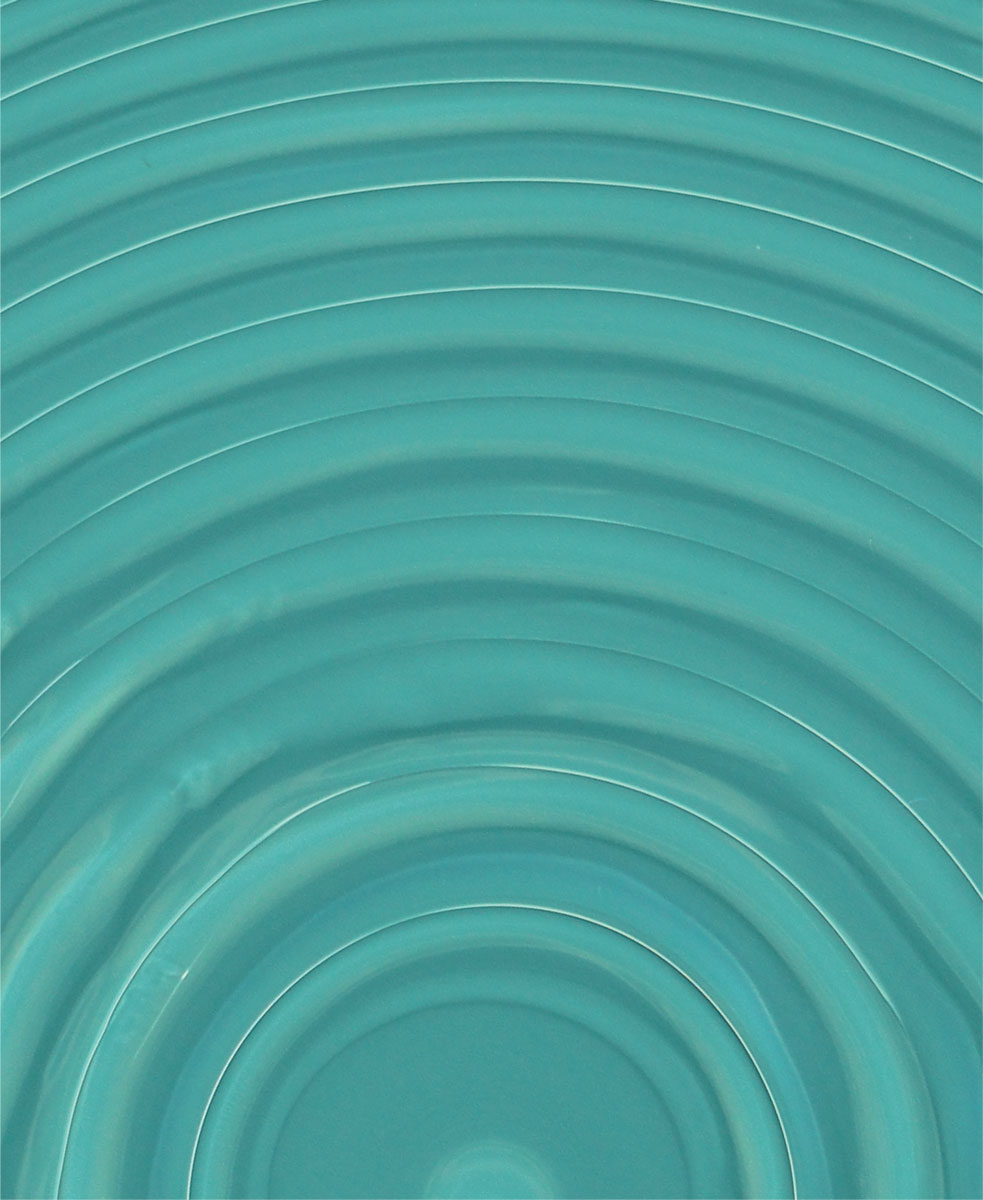 An optical image of the surface shows ridges generated spontaneously during free-surface frontal polymerization of dicyclopentadiene. The samples are imaged under UV light to enhance visualization.

A simple plastic water bottle isn’t so simple when it comes to the traditional manufacturing process. To appear in its final form, it has to go through a multi-step journey of synthetic procedure, casting, and molding. But what if materials scientists could tap into the same biological mechanisms that create the ridges on our fingertips or the spots on a cheetah in order to manufacture something like a water bottle?

A research paper titled “Spontaneous Patterning during Frontal Polymerization” was published in the American Chemical Society’s Central Science journal, a research tipping point into how material scientists can use biological truths to manufacture materials in a more sustainable way.

Evan M. Lloyd, a Ph.D. graduate of the Department of Chemical and Biomolecular Engineering and Elizabeth Feinberg, a former postdoctoral research associate with the Department of Chemistry, led the project seeking answers on how to fabricate functionally useful patterns in ways inspired by developmental biology. While at Beckman, they were both members of the Autonomous Materials Systems Group.

"When you build a house, you have to build every room in the house. But when you’re making a body, nobody’s putting the arms and the legs in the right place —it just happens,” Feinberg said. “We wanted to know if we could do things more like nature, rather than how we typically do it ourselves.” 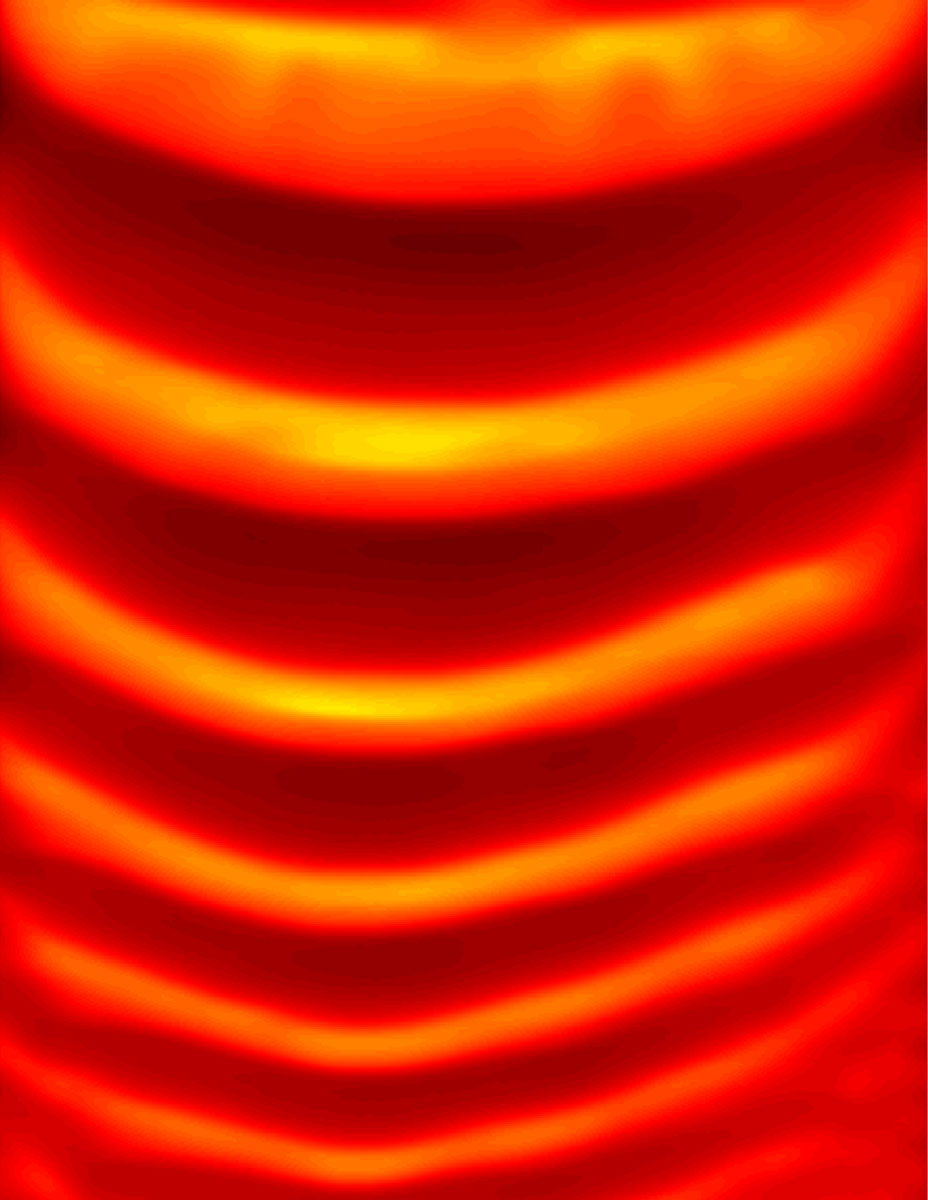 This patterned thermal profile is obtained during the free-surface frontal polymerization of dicyclopentadiene in a straight channel.

In general, complex patterns integral to the structure and function of biological materials arise spontaneously during morphogenesis, or a biological process that causes a cell, tissue, or organism to develop its shape. In sharp contrast, functional patterns in synthetic materials are typically created through multistep manufacturing processes, making it difficult to change how materials are patterned.

“It’s very hard to get patterns into materials but throughout biology, we see patterns with a large number of uses, from mechanical performance to camouflage,” Lloyd said. “We wanted to see if we could look at ways that patterns could emerge spontaneously.”

Step one for the researchers was to use a relatively new manufacturing technique known as frontal polymerization, a reaction-thermal diffusion system, which utilizes the diffusion of heat to promote chemical reactions. Under certain conditions, the chemical reaction produces regions with varying degrees of heat. The team took advantage of these properties to change polymer microstructure and mechanical properties, and subsequently fine-tuned the reactions based on the applications of heat. 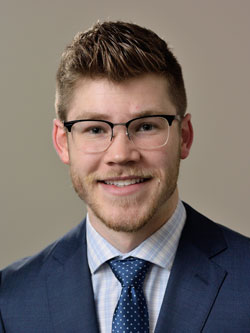 Evan Lloyd“We can incorporate alternative chemistry that is thermally sensitive within that temperature difference regime to generate changes in color, morphology, mechanical property,” Lloyd said. “It’s really all about how we can translate changes in reaction temperature and see lasting material properties.”

The result achieved in this paper is essentially the varying stiffness of materials, explained faculty author and Beckman Institute Director Jeff Moore, an Ikenberry Endowed Chair of chemistry.

“The research was made possible by interdisciplinary collaboration. The team brought together chemists, materials scientists, and computational modelers,” Moore said. “The diversity of thinking helped us realize a vision for polymer fabrication that may someday be important in manufacturing.”

Nancy Sottos, Swanlund Endowed Chair and head of the Department of Materials Science and Engineering, and Philippe Geubelle, Bliss Professor of aerospace engineering, also collaborated on the paper. 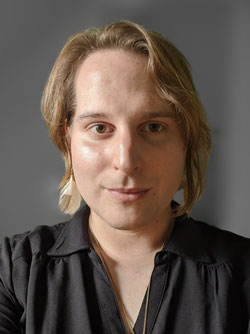 Elizabeth FeinbergManufacturing materials created with this method could be implemented on a large scale within a few decades, Feinberg predicts, imagining these materials could be used in mundane, everyday items like desks, or in massive products like windmills or airplanes. But due to the nature of these reactions, the result is monumental in creating sustainable manufacturing production.

“When you cure a polymer, you have to thermally cure it at 100 degrees or more, and it has to bake for hours. That takes a lot of energy,” Feinberg said.

When it comes to wind turbine blades or an airplane fuselage, massive amounts of energy must be applied to reach a suitable end result.

“But here, because the way frontal polymerization works, you apply energy to just one small spot and it propagates or releases the latent energy in the chemical precursor,” she said. “It requires a lot less energy to get it going.”

Additionally, by looking toward a future of multi-functional materials, it’s also possible to reduce the number of single-use materials needed, Lloyd explained.

ACS Central Science is one of the flagstone journals for publishing interdisciplinary work.

“This project was really imagined by Scott White,” Feinberg added. White was an aerospace engineering professor and mentor to both Lloyd and Feinberg who died in 2018. He was a pioneer of self-healing materials and one of the researchers who conceived the original idea for this project. “Finishing this project and having a beautiful outcome of it feels like a memorial to him in a lot of ways. There’s this human component to it and it was really important to see this through, not just from a technical and curiosity perspective, but because it was important to him.”

Editor’s note: The paper “Spontaneous Patterning during Frontal Polymerization”  can be found at https://pubs.acs.org/doi/abs/10.1021/acscentsci.1c00110.