A unique collaboration between the Beckman Institute and the campus’ engineering college has enabled the creation of a new state-of-the-art X-ray phase-contrast imaging laboratory that will enable core research for the life and material science communities.
By Tejas Mahadevan Padmanabhan

The Computational X-ray Imaging Science Laboratory has an unconventional liquid-metal-jet-based X-ray source that generates a brighter X-ray beam with a smaller focal area compared to conventional X-ray. Photo by Scott Paceley Photography. A cross-campus collaboration has created a new 3D X-ray phase-contrast imaging laboratory that will allow researchers to overcome some limitations of conventional X-ray imaging and enable core research for the life and material science communities.

The collaboration between the Beckman Institute for Advanced Science and Technology and The Grainger College of Engineering at the University of Illinois Urbana-Champaign has created the Computational X-ray Imaging Science Laboratory, which is located in the Beckman Institute. Mark Anastasio, who is a Donald Biggar Willett Professor in Engineering and head of the Department of Bioengineering, is the principal investigator of the laboratory. 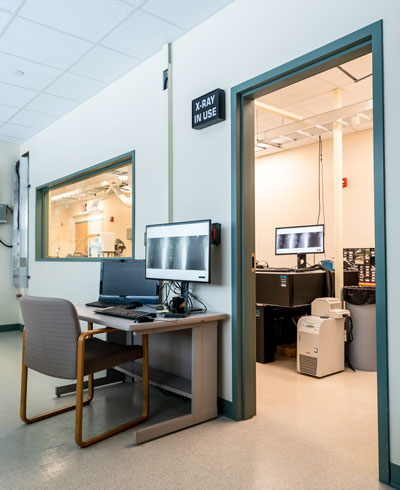 The imaging room of the X-ray lab has lead-lined walls, doors, and even windows to protect the system operator. Photo by Scott Paceley Photography. The laboratory is not a conventional X-ray imaging facility but rather has been designed to advance and translate phase-sensitive X-ray imaging technologies. X-ray phase-contrast imaging is a technique that exploits the dual nature of X-rays, which are both wave-like and particle-like. Conventional X-ray imaging uses the particle nature of the X-rays and has limited use for applications that comprise similar materials such as those with small differences in densities and atomic numbers. Similar to a phase-contrast optical microscopy, X-ray phase-contrast methods can yield image contrast based on an object’s spatially variant refractive index distribution, thereby removing the reliance on absorption contrast.

“If you want to image biomaterial implants, such as polyethylene glycol, in a mouse using conventional X-ray imaging, you will run into issues,” said Ashish Avachat, a postdoctoral researcher associate. “We cannot distinguish the implant from the surrounding tissue using conventional X-ray imaging based on the absorption of X-rays. To circumvent this, we are exploiting phase-effects that can be measured due to our unique system configuration.” 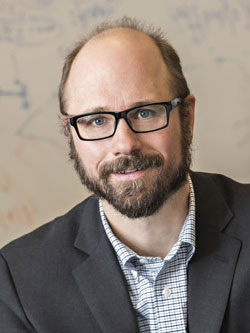 Mark AnastasioBeing able to exploit both the wave and particle nature of X-rays, Beckman’s new imaging facility will provide researchers with a core research tool to perform more innovative experiments, including those that are usually limited by conventional X-ray imaging. In addition, the laboratory’s optical table is 14 feet, which will allow researchers to investigate long propagation distances.

The lab is located in a space previously dedicated to student offices. It went through extensive remodeling in order to be deemed fit for the X-ray imaging system comprising the unconventional liquid-metal-jet-based X-ray source that generates a brighter X-ray beam with a smaller focal area compared to conventional X-ray. 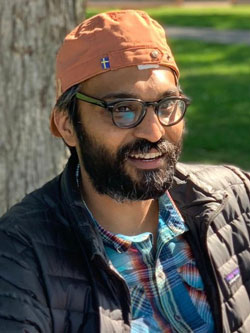 Ashish AvachatSome of these changes included lead shielding in the walls, doors, and windows, and installation of proper HVAC for wet lab activities. When delivered to Beckman, the shielding and its packing materials weighed 18,000 pounds or the equivalent of nearly five cars. It had to be moved to the second floor gradually because of elevator freight limits.

This new imaging capability will allow researchers to conduct in vivo imaging experiments involving small animal models and will improve upon existing micro-CT capabilities for soft-tissue imaging applications. It will also permit high-resolution imaging of heterogeneous samples and enable quantitative 3D imaging for applications that include characterizing micro-defects and pores in materials.

The lab is nearly ready for use. Potential collaborators are encouraged to contact Mark Anastasio, maa@illinois.edu.