Earlier this year an effort led by members of Beckman's Autonomous Materials Systems Group — including many graduate students — resulted in a manufacturing template to fabricate nasal swabs that were in demand for COVID-19 testing. Although the project was ultimately shelved, the researchers were inspired to build more materials for the saliva testing sample collections.
By Ananya Sen

The strength of cross-disciplinary collaboration was demonstrated earlier this year when members of the Autonomous Materials Systems Group at the Beckman Institute spearheaded efforts to mass produce nasal swabs to meet high demand for COVID-19 testing. A team of researchers from across the University of Illinois Urbana-Champaign collaborate to make swabs for COVID testing.

The group was helped by researchers from across the University of Illinois Urbana-Champaign campus, and they put together a protocol for manufacturing the swabs. Although the demand for nasal swabs dwindled after a few months, the researchers were inspired by their success with the swabs to later help design better racks for holding the tubes used during saliva testing.

On April 5, the Illinois Governor’s office realized that there was a shortage of COVID-19 testing swabs. Unfortunately, very few suppliers could provide the swabs. The office reached out to the university to see if they could use 3D printers to make nasal swabs.

“The nasal swabs that are used for COVID testing are single use. They consist of two main components: The stalk that allows the practitioner to insert the swab deep into the nasal cavity, and the head which collects the mucus,” said Mayank Garg, a postdoctoral fellow in the AMS Group. “The governor’s office wanted us to manufacture them cost-effectively in bulk.”

The problem of using 3D printers became apparent almost immediately when the researchers realized that the equipment would not be able to support such large numbers. They were also faced with challenges when they tried to use molds to make them. 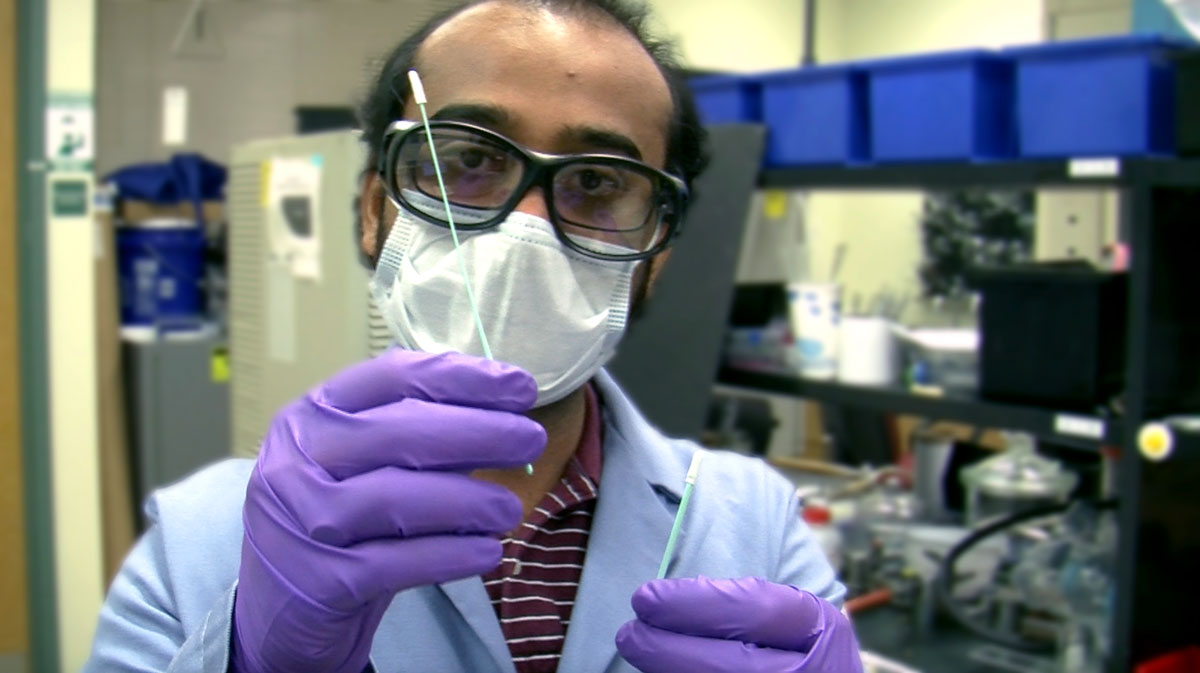 Mayank Garg from the Beckman's AMS Group helped designed swabs that could be made by improving the available resources.  “I had these high quality swabs that I bought a few years ago for a research project, and they were exceptionally cheap. They were also part of a non-competing supply chain because no one was interested in using them for COVID,” Garg said. “Additionally, the head was made from knitted polyester, which would allow them to absorb mucus really well.”

However, the swabs were half as long as they needed to be and were not flexible enough. To make the swabs longer, the researchers clamped them between two binder clips and added weights to the bottom of the clips. The swabs were then heated in the oven for a few minutes, to soften the polypropylene, resulting in a prototype which had the desired length and flexibility.

The researchers further improved the rate of production with the help of an interdisciplinary team of engineers, increasing the speed by ten times. Instead of using an oven, they loaded the multiple swabs on a custom clamp, heated them together, allowing them to be lengthened uniformly. The researchers also improved the swabs based on recommendations from medical personnel at Carle Foundation Hospital. The new swabs had thicker handles and were stiffer.

“When the need arises, solving the problem is what matters; innovation is demanded. This project tapped into the power of a diverse team to find rapid solutions to pressing problems. The team was able to improvise simple and practical, yet, creative solutions,” said Jeff Moore, an Ikenberry Endowed Chair, a professor of chemistry, and the director of the Beckman Institute.

“Our efforts came to an official halt by the end of May. We knew going in that we wanted to succeed, but we also hoped that we would never need to use the method,” Garg said. “However, the lessons we learnt helped us design a new rack system for the COVID saliva testing sites.

“Initially every tube was put into an individual Ziploc bag, which would consume a lot of time to unpack. Instead of 3D printing new racks, we used binder clips once again. We took 12 mini binder clips, put them on four racks in different locations, which allowed the racks to hold ten times their weight.”

Ultimately the solution increased the testing speed by three times. “The most important lesson we learned from our experience is that during an emergency, you cannot afford to perfect each step. You have to use what you have, put it out in the field, get feedback, and then decide which parameters you need to change,” Garg said.