Detecting a new mechanism of toxicity can aid in Alzheimer's diagnosis

Researchers find that specific protein ensembles have the capacity to disrupt the membrane of neurons, causing their death. The discovery could help in earlier diagnosis of Alzheimer’s, a neurogenerative disease that cause changes in brain function.
By Beckman Institute

The brains of millions of people suffering from Alzheimer´s disease are slowly and inescapably being depleted of neurons, which leads to the characteristic loss of memory and cognitive function associated with this condition. However, the cause of neuronal death is still unknown. The treatments available are aimed at slowing down the development of dementia and only help to improve quality of life for short periods. A cure is still needed. 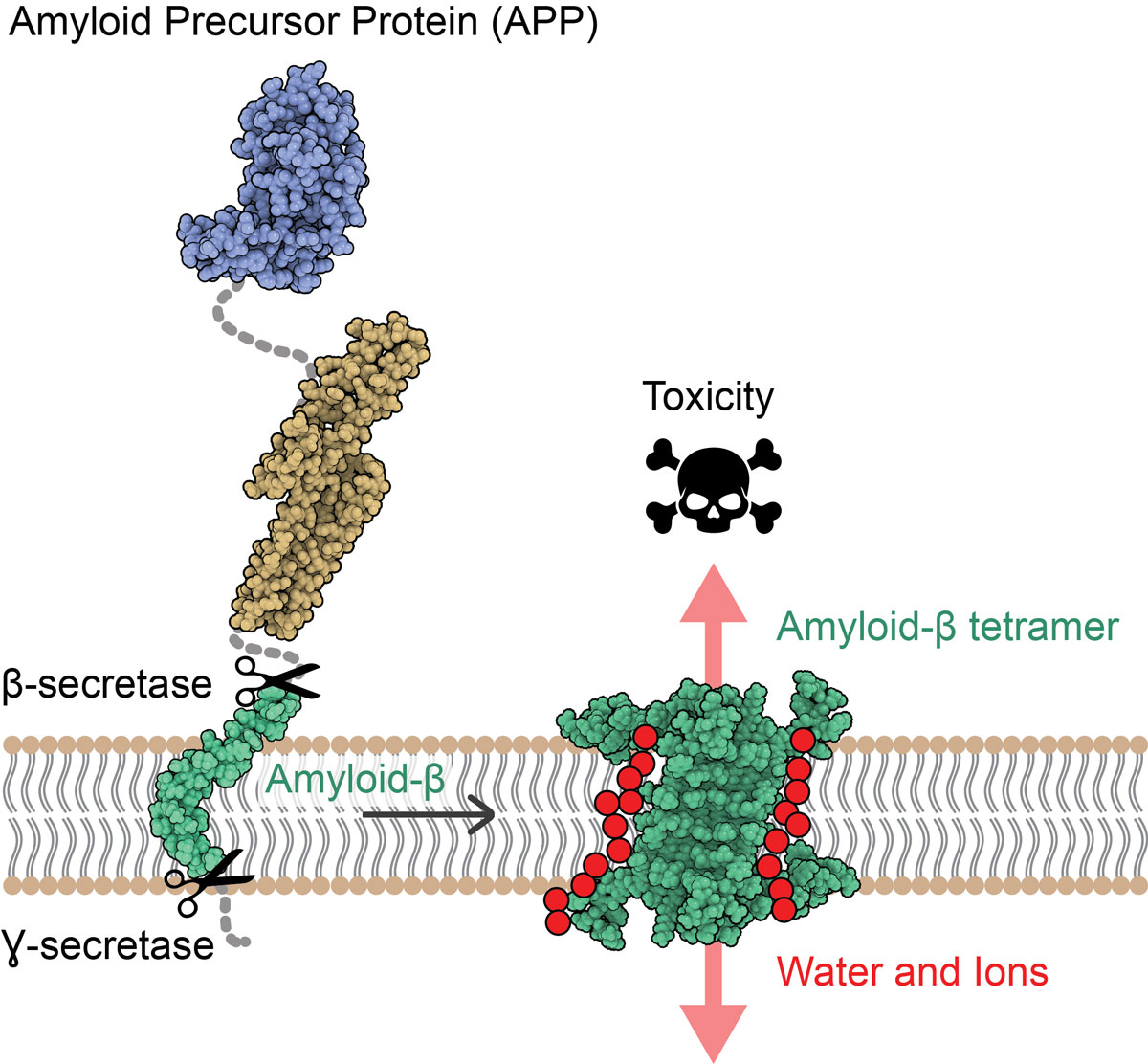 APP is inserted into the cell membrane of neurons. After cleavage by the secretases, the protein is released, and four or eight copies join together to form oligomers. The edges of the these oligomers form a path for the passage of water and ions across the membrane, disrupting ion cell homeostasis.

An international group of researchers including members of the Tajkhorshid group at the Beckman Institute for Advanced Science and Technology and the Department of Biochemistry at the University of Illinois Urbana-Champaign have reported a new mechanism of toxicity for amyloid-beta protein assemblies. The recent joint publication shows the capacity of Aβ assemblies to disrupt the neuronal membrane, allowing water and ions to pass through it and causing the death of these cells. Several studies have proposed that the interaction of the Aβ protein with the neuronal membrane is responsible for the neuronal death observed in Alzheimer’s. However, the Aβ protein is a difficult therapeutic target because it is “sticky” and self-assembles, adopting distinct shapes and sizes.

The study “Aβ (1-42) tetramer and octamer structures reveal edge conductivity pores as a mechanism for membrane damage” was published in Nature Communications.

“The oligomeric form of Aβ is the toxic form of this peptide and most relevant to the pathophysiology of the disease,” said Emad Tajkhorshid, a professor of biochemistry at Illinois. “It was necessary to characterize its structure and how it interacts with neuronal membranes in order to better understand the progression of the disease and design better therapeutics.”

The study highlights two Aβ protein ensembles, one formed by four Aβ proteins and the other by eight, arrangements that can disrupt the neuronal membrane, proposing them as candidates for causing neurodegeneration in Alzheimer’s.

“Knowing the features that characterize these protein ensembles, such as the number of molecules that make them and the shape they adopt, is crucial to designing effective therapeutic strategies that target the forms of Aβ ensembles responsible for the neurotoxicity in AD,” said Natàlia Carulla, a project manager at ORION Prevencío, Barcelona.

The study was a concerted effort among several labs, combining diverse experimental techniques such as protein biochemistry, electrophysiology, and NMR to purify and characterize the Aβ oligomeric states, with advanced simulation techniques used to describe the details of the interaction between the peptide and the cellular membrane and how it may disrupt neuronal membranes.

“Our computer simulations were able to capture, at the atomic scale, the process by which these Aβ oligomers deform membranes and form pores that can disrupt neuronal homeostasis.” said Moeen Meigooni and Andrés Arango, biophysics students at Illinois who conducted the computational component of the project.

“Our study suggests that some Aβ associations can perforate the membrane of neurons, alter their osmotic equilibrium, and consequently trigger their death,” said Sonia Ciudad and Eduard Puig, first authors of the paper who are affiliated with several international institutes. Further work will focus on approaches to prevent the formation of this ensemble — thus preventing membrane disruption. Currently, the drug discovery pipeline in this field does not include any drug targeting membrane-associated Aβ assemblies, so this finding could make a significant breakthrough in the treatment of AD.

On the U.S. side, this work was funded by the National Institutes of Health in support of the NIH Biotechnology Center for Macromolecular Modeling and Bioinformatics at the Beckman Institute of Advanced Science and Technology, University of Illinois Urbana-Champaign. The simulations were supported by NSF XSEDE resources and the Blue Waters supercomputer at Illinois.