Researchers have developed a new approach to compare changes in neural communication using electroencephalography and functional magnetic resonance imaging simultaneously. The approach allows them to assess the association between the two measurements and better understand neural connectivity changes over time.
By Ananya Sen 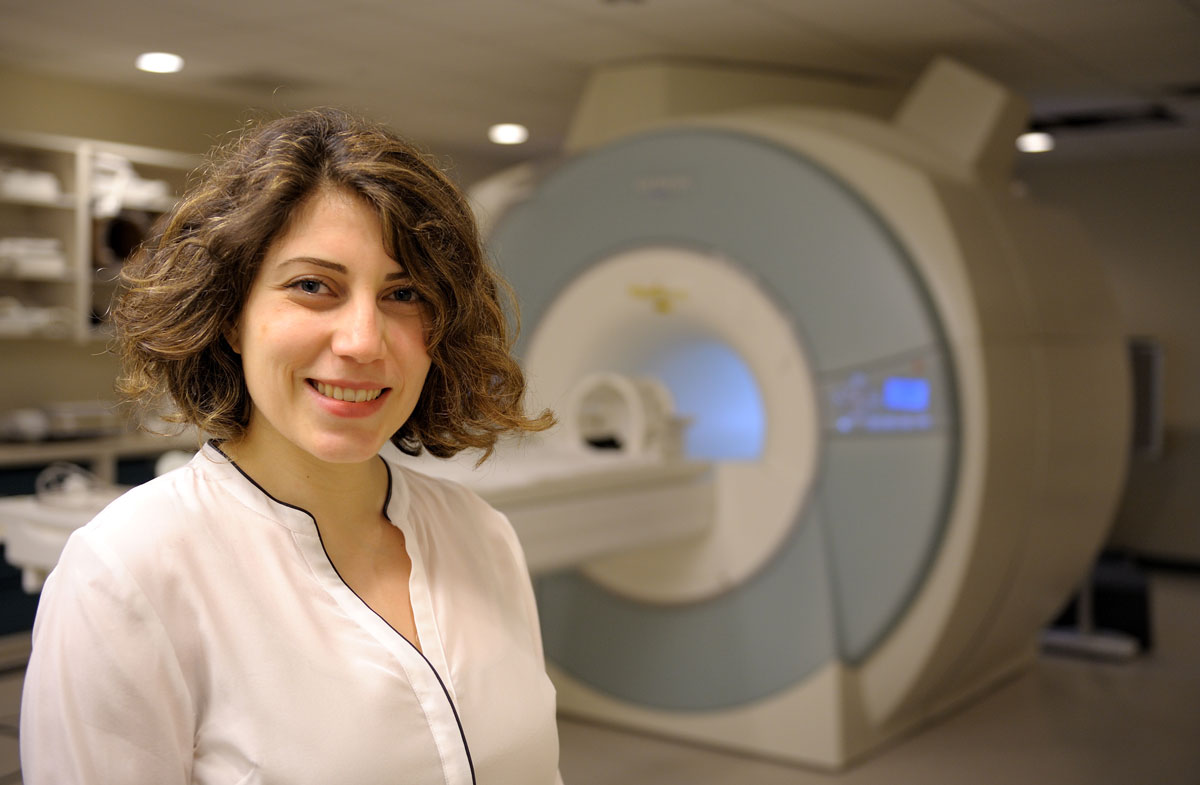 Sepideh Sadaghiani is interested in studying the connectivity and functions of brain networks.

Functional magnetic resonance imaging and electroencephalography are used to provide information on very different aspects of neural communication between brain areas. fMRI captures very slow aspects of this communication based on neurons’ energy expenditure, whereas EEG directly measures neurons’ rapid communication in real time from the electrical signals of the brain. Researchers from the Beckman Institute for Advanced Science and Technology have developed a new approach to look at both types to measure brain communication simultaneously.

“Over the last two decades it has become more common to look at how different regions across the brain communicate rather than focusing on activation of individual regions. The connectome describes the entirety of connections across all the brain regions,” said Sepideh Sadaghiani, an assistant professor of psychology at the University of Illinois at Urbana-Champaign, who leads the CONNECT Lab at the Beckman Institute. “Unfortunately, it has been hard to look at fMRI and EEG connectomes simultaneously.”

EEG measures the electrical signals that are generated by neurons across the brain. However, the MRI scanners that are used for fMRI measurements interfere with the EEG signals because the scanners use magnetic fields that generate their own currents. As a result, artifacts are produced.

“We looked at how the fMRI connectome changes over time and whether those changes are accompanied by changes in electrophysiological connectomes, as measured by EEG,” Sadaghiani said.

“The correlation confirms that the shortcomings of both methods can be overcome and we can obtain meaningful data,” Sadaghiani said.

The researchers are interested in improving the limitations of the two methods further. “fMRI is used to look at very specific regions of the brain that are a couple of millimeters in dimension. On the other hand, EEG signals can only look at large regions of the brain,” Sadaghiani said. “If we need to compare connectomes obtained from both sets of data, we lose the spatial precision of fMRI. Conversely, EEG measures very rapid changes in connectomes whereas fMRI is inherently slow. Consequently, when comparing connectomes changes in EEG and fMRI we may lose the temporal resolution of EEG.”

The researchers will conduct future studies at the Biomedical Imaging Center at Beckman to obtain higher quality data. Combined with new analytic approaches, they plan to compare the EEG and fMRI connectomes without losing the advantages of either method.

The paper “Concurrent EEG- and fMRI-derived functional connectomes exhibit linked dynamics” can be found at https://doi.org/10.1016/j.neuroimage.2020.116998.