Researchers have developed a simple model to study how ants balance their large heads relative to their body size. Such models may have useful applications in bio-inspired designs.
By Ananya Sen

Researchers use a variety of modelling approaches to study form and function. By using a basic biomechanical model for studying body form and center of mass stability in ants, new research identifies the benefits of “simple models” and hope that it can be used for bio-inspired designs. 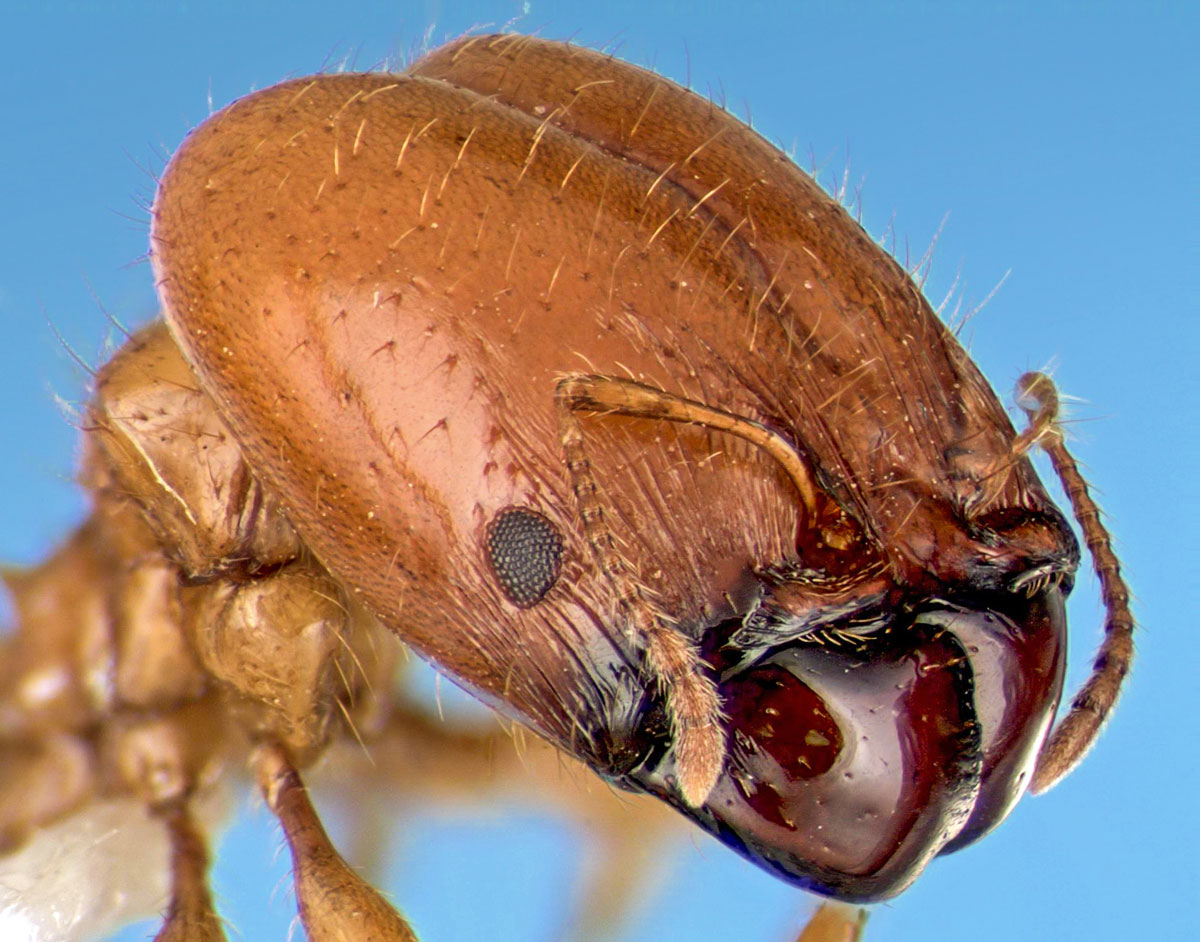 Soldier ants have giant heads with pincers that help them defend the colony. Photo by Alex Wild.

“Most organisms are constrained in their shape and size because they are juggling different needs such as the ability to fly, forage for food, and reproduce,” said Andrew Suarez, a professor of entomology and the head of the Department of Evolution, Ecology, and Behavior at the University of Illinois at Urbana-Champaign. “Ants are unique because they live in colonies and divide their responsibilities. Therefore, they don’t have the body constraints that other insects do.”

“Ants have a wide range of head sizes relative to their body,” said Philip Anderson, an assistant professor of evolution, ecology, and behavior. “Some ants have such extremely large heads that even though they look like their heads should pitch forward, they don’t. To study their body design, I created a simple mathematical model to locate their center of balance.”

The researchers, both affiliated with the Beckman Institute for Advanced Science and Technology, created a basic model of an ant body by treating it as a series of connected ellipsoids. They used ant body measurements from antweb.org, which has collections of ant pictures put together by the California Academy of Sciences.

The study “‘Simple’ biomechanical model for ants reveals how correlated evolution among body segments minimizes variation in center of mass as heads get larger” was published in Integrative and Comparative Biology.

“We found that the ants maintain a center of balance over where their legs are,” Anderson said. “These models have helped us understand how these unusual forms of ants have evolved and how the rest of their body compensates for it.”

“The worker ants are like hopeful monsters. They can play with their body form and produce more variation than other insects. With these models we can see that although they have these exaggerated forms, they are not breaking the laws of physics,” Suarez said.

Even though the researchers have focused on simplifying the model as much as possible, there are some limitations “Treating the ant bodies like ellipsoids doesn’t accurately represent their actual shape,” Anderson said. “Additionally, I assume that every part of the body has the same density, but our co-author Michael Rivera has shown that the head is a lot denser than the abdomen, which changes the calculations.”

The researchers are hopeful that such simple models can be used for applications that use bio-inspired designs. “What happens if you need to add weight to the front of a machine? Is it enough to add weight to the back or are there other ways to compensate? Using such models, we can look to nature for solutions to these issues,” Suarez said.

The study was funded by the National Science Foundation.

The researchers took part in the symposium Melding Modeling and Morphology: integrating Approaches to Understand the Evolution of Form and Function at the Society for Integrative and Comparative Biology annual meeting this past January in Austin, Texas. Lindsay Waldrop and Jonathan Rader organized the symposium.

The study “’Simple’ biomechanical model for ants reveals how correlated evolution among body segments minimizes variation in center of mass as heads get larger” can be found at https://doi.org/10.1093/icb/icaa027.