Members of the Autonomous Materials Systems Group at the Beckman Institute have developed a new technique to make microcapsules that can respond to pH changes. The technique has several applications including anti-corrosive coatings.
By Ananya Sen

Researchers have developed a new method to create microcapsules, which are tiny droplets surrounded by a solid shell. The technique can be used to make microcapsules that respond to changes in pH, which are useful for applications such as anti-corrosion coatings. 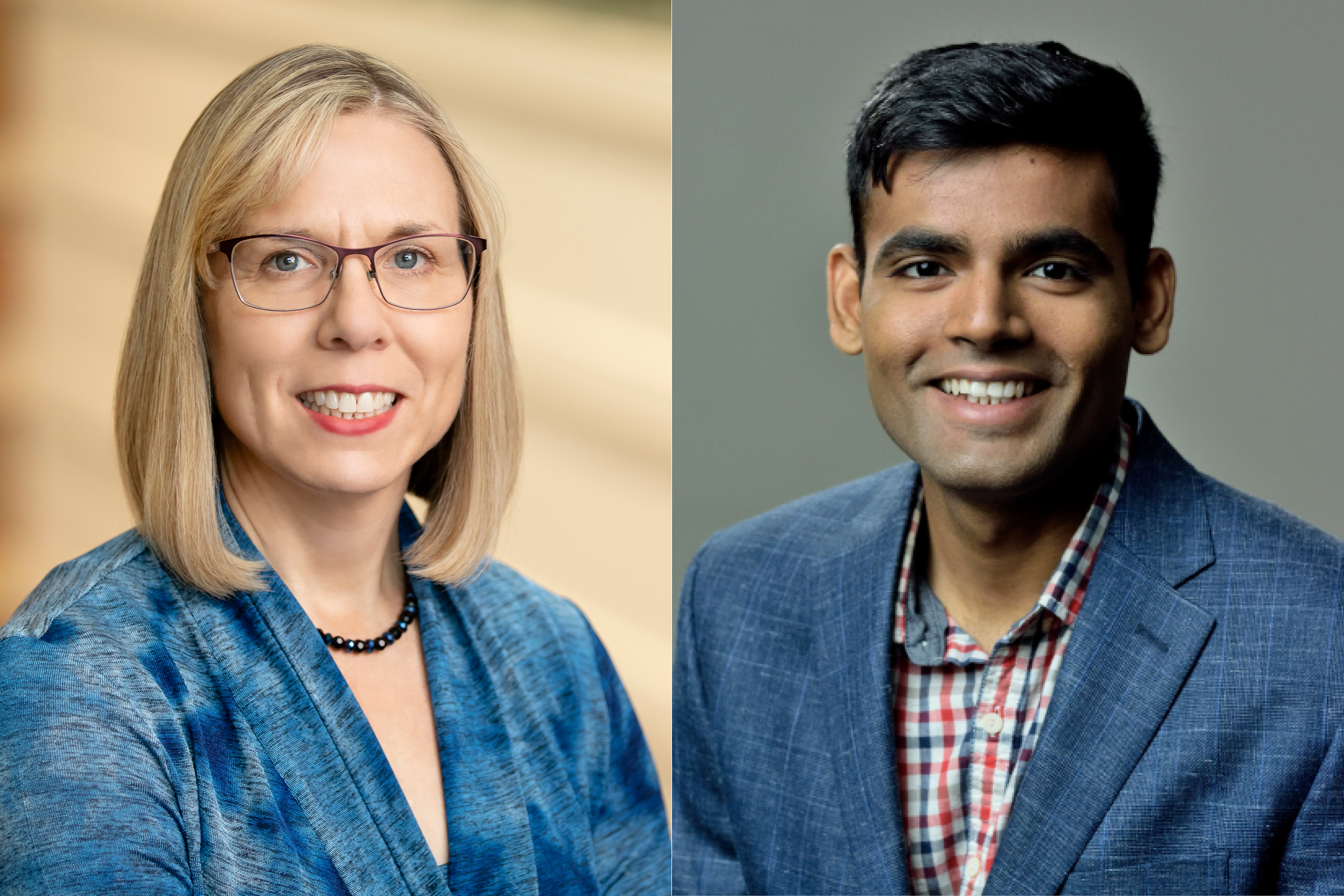 Nancy Sottos, left, and Dhawal Thakare have developed a new technique to create microcapsules that are uniform in size.

The study “Fabrication of pH-responsive monodisperse microcapsules using interfacial tension of immiscible phases” was published in the journal Soft Matter.

“There are a number of ways that have been used to make microcapsules,” said Nancy Sottos, a Maybelle Leland Swanlund Chair and head of the Department of Materials Science and Engineering at the University of Illinois at Urbana-Champaign. “However, those methods are tedious, slow, and they clog the devices. Additionally, the capsules are not the same size.”

The new technique, developed by members of the Autonomous Materials Systems Group at the Beckman Institute for Advanced Science and Technology, involves using emulsion templates to make the microcapsules. “It’s like making a salad dressing. You slowly mix in the oil to the water. The faster you mix, the smaller the droplets. Then you form a shell wall around the emulsion droplets,” said Sottos, who is the AMS Group leader.

A video illustrating the technique for forming emulsions of controlled size.

The researchers used a needle that contains capillary tubes inside it. The liquid core of the microcapsule enters through a central tube and the shell material comes through an outer tube. The needle vibrates uniformly across the surface of water. When the needle crosses the surface, the droplets are detached from the capillary tubes, forming uniformly sized emulsion droplets for microcapsules.

“This technique gives you control over the shell thickness, the core volume, and the overall size of the capsule,” said Dhawal Thakare, a graduate student in the AMS Group. “Our technique is simple and can be assembled very easily in a lab environment.”

Using this technique, the researchers have made pH-responsive capsules that can break open when there is a pH change in the environment. “Drug delivery often uses pH changes to release the capsule contents. We were interested in using them to encapsulate anti-corrosive agents,” Sottos said. “When the pH changes, the microcapsules open up and release the anti-corrosive agents.”

Scanning electron micrographs of intact, left, and ruptured microcapsules with a polymeric shell wall and an aqueous core.
“Although the technique gives you precise control over the microcapsules, it is hard to make capsules that are very small. Another disadvantage is that you are introducing fluids through capillaries. As the viscosity of the fluid increases, the pressure increases, and there are higher chances of not attaining an unobstructed flow,” Thakare said.

The researchers are interested in expanding the range of materials that they can encapsulate and improve the technique so that they can make smaller microcapsules.

The study was funded by the BP International Centre for Advanced Materials.

The study “Fabrication of pH-responsive monodisperse microcapsules using interfacial tension of immiscible phases” can be found at 10.1039/D0SM00301H.