Members of the Quantitative Light Imaging Laboratory at the University of Illinois recently published a paper in Nature Photonics that describes how to use harmonic optical tomography to image microscopic objects which are non-homogenous. The technique has promising applications in cancer diagnosis and prognosis.
By Ananya Sen

A collaboration between researchers at the University of Illinois at Urbana-Champaign and Colorado State University resulted in a new 3D imaging technique called harmonic optical tomography that facilitates the visualization of tissues and other biological samples on a microscopic scale. 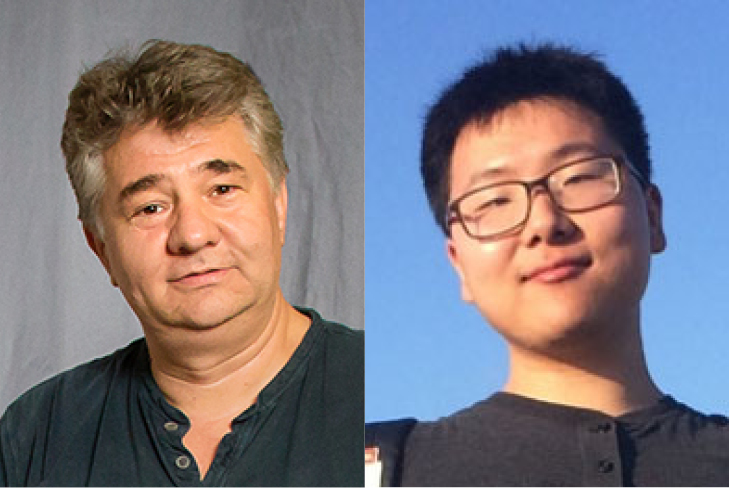 The technique can potentially be used to assist with diagnosing cancer and other diseases. The technique is based on using holographic information, which measures light patterns, to generate 3D images of a sample. Three-dimensional imaging that can peer into the interior of an object provides critical information for a diverse range of applications, such as medical diagnostics, finding cracks in oil wells and airplane wings, using tomographic X-ray, and ultrasound methods.

The paper “Harmonic optical tomography of nonlinear structures" was published in Nature Photonics.

“Our lab specializes in using holographic data to investigate live cells and tissues,” said Gabriel Popescu, a professor of electrical and computer engineering and the director of the Quantitative Light Imaging Laboratory at the Beckman Institute for Advanced Science and Technology. “We wanted to extend this technique to nonlinear samples by combining the holographic data and new physics models.”

“This work started out as an interesting theoretical project I worked on with Popescu as a part of his graduate level microscopy course in my first year of grad school. I am excited to see it mature into a functioning experimental prototype,” said Varun Kelkar, a graduate student who is a member of Mark Anastasio’s Computational Imaging Science Lab.

Imaging the muscles in mice with standard techniques, left, and with harmonic optical tomography. The new technique is better at revealing the structure of the tissue.

The researchers developed theoretical models to describe how to image the tissue and discovered a unique capability for 3D imaging that arises, counterintuitively, by illuminating the sample with blurry, out-of-focus laser light. The team designed and built a new system at Colorado State University to collect data. The data was then reconstructed with computational imaging algorithms. The experiments verified an entirely new form of optical tomography that validates the experimental predictions.

“A key to the experimental demonstration of this new tomographic imaging was a custom, high-power laser, which was designed and built by CSU graduate student Keith Wernsing,” said Randy Bartels, a CSU professor of electrical and computer engineering and a co-author of the paper.

The researchers used two types of samples to test their theory, said Chenfei Hu, a graduate student in the Popescu group. “The first was a manufactured crystal that is typically used for generating nonlinear signals. The second was a biological sample where we used a muscle tissue.”

“This new type of tomographic imaging could prove to be very valuable for a wide range of studies that currently rely on two-dimensional images to understand collagen fiber orientation, which has been used as a reporter for a number of types of cancer,” said Dr. Jeff Field, the director of the Microscopy Core Facility at CSU and a Research Scientist in electrical engineering.

“Unlike typical laser-scanning microscopes, an additional benefit of HOT is that its speed makes it much less vulnerable to vibrations and unwanted microscope drift, which leads to sharper images and increased repeatability,” said study co-author Kimani Toussaint, a former professor in the College of Engineering at Illinois and now professor in the School of Engineering at Brown University.