Hyunjoon (Joon) Kong’s group will collaborate with other Beckman Institute researchers on two grants. The National Science Foundation will fund the investigation into how neurons and muscle cells communicate with each other. The Alzheimer’s Foundation will support research to develop a drug delivery system that can be used to treat Alzheimer’s disease.
By Ananya Sen

Two grants will fund interdisciplinary research at the Beckman Institute for Advanced Science and Technology, including a look at how neurons and muscle cells communicate with each other and also to develop a drug delivery system for treatment of Alzheimer’s disease. 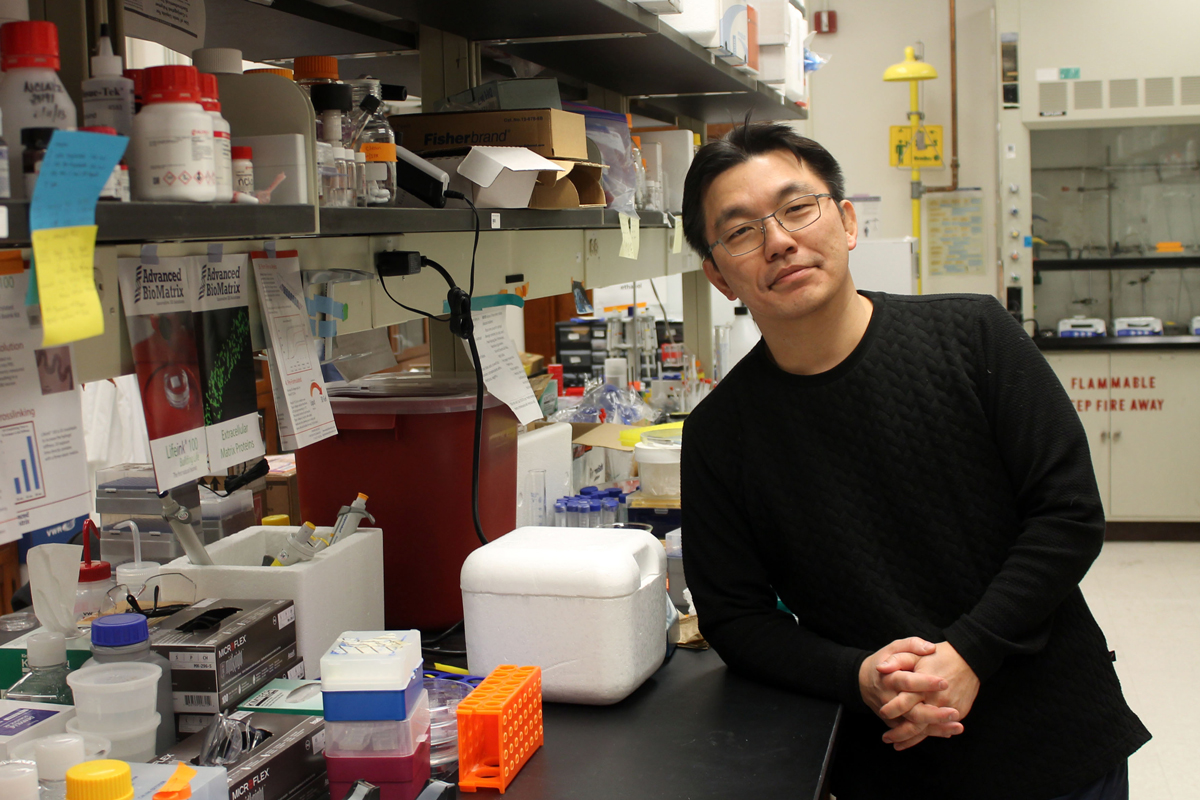 The grant from the National Science Foundation will facilitate the study of how neurons and muscle cells communicate with each other. “My group is interested in engineering functional muscle and using it to assemble autonomous bioactuator systems,” said Hyunjoon Kong, a Robert W. Schafer professor of chemical and biomolecular engineering at the University of Illinois at Urbana-Champaign.

“The muscle engineered in vitro is not the same as the muscles in our body because the system does not have any innervating motor neurons. This project is to understand how we can facilitate the innervation of the neurons into the muscle,” Kong said.

Kong’s lab will collaborate with Gabriel Popescu, a professor of electrical and computer engineering, and Martha Gillette, a professor of cell and developmental biology. All are affiliated with the Beckman Institute.

In addition to studying how the neurons and muscle cells communicate, the Kong group will also look at the interaction between neurons and glial cells, which influence neuronal activity. “Although glial cells are not well characterized, they are known to provide certain signals that make the neurons transmit their electrical signals,” Kong said.

“I will be working with Martha Gillette’s group, who are experts in neurobiology and can guide us in what type of neural cells to look at,” Kong said. “Popescu group members are experts at imaging intracellular events and we want to use their imaging techniques to demonstrate the interaction between the neurons and the muscle cells.”

Members of the Kong group hope that the study will enable them to understand how neurons can be reactivated in injured muscle, which can help improve the treatment of various neuromuscular disorders and acute muscle injuries.

The second grant, from the Alzheimer’s Foundation, will fund research by the Kong group in collaboration with Hee Jung Chung, an associate professor of molecular and integrative physiology and Beckman Institute faculty member.

The grant will study how a drug that has the potential to treat Alzheimer’s disease can be delivered into the body. The drug was developed to target tau proteins that, along with β-amyloid proteins, cause the disease. “Historically, researchers have been focused on treatments that reduce the β-amyloid proteins. However, a large group of patients do not respond to those treatments because the tau proteins are also responsible,” Kong said.

The Kong group hopes to join the research effort that is now focusing on synthesizing nano-sized drug carriers that can target the tau protein. “The drug that targets tau proteins cannot be currently used because it is hydrophobic and therefore cannot dissolve in water,” Kong said. “As a result, you cannot deliver it orally or through injection.” The group will try to solve the problem by encapsulating the drug in a nanoparticle system that can be used to target the diseased regions of the brain.