The Chan group has recently developed a new probe to detect the activity of Cyclooxygenase-2, an enzyme that plays a major role in driving the progression of cancer. The researchers hope that this probe can have potential applications in cancer therapy.

The Chan group at the Beckman Institute for Advanced Science and Technology has recently developed a probe named CoxFluor, which is able to distinguish between Cyclooxygenase-2, an enzyme that plays a major role in driving the progression of cancer, and Cyclooxygenase-1, which is expressed in all cells. 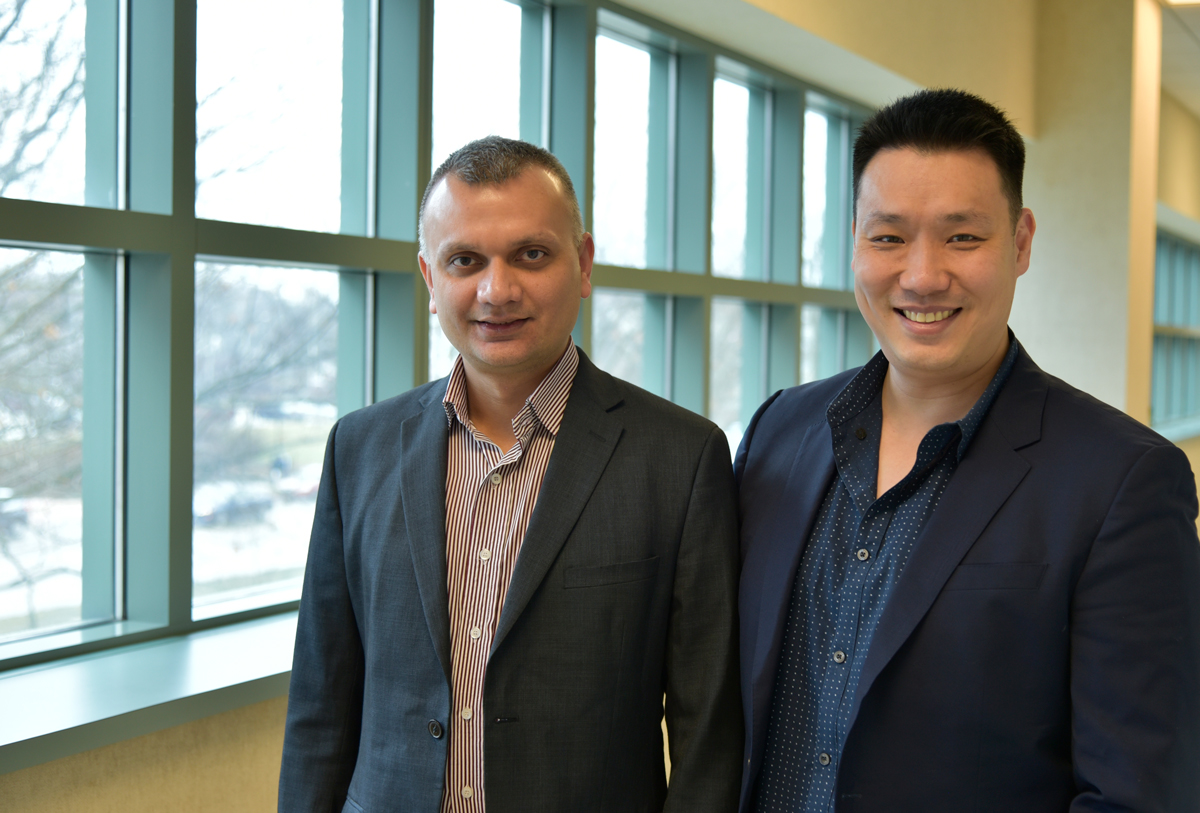 Visiting scholar Anuj Yadav, left, and Jefferson Chan, an assistant professor of chemistry, are interested in developing probes that are specific for Cyclooxygenase-2.

Led by Jefferson Chan, an assistant professor of chemistry at the University of Illinois at Urbana-Champaign, the paper, “An Activity-Based Sensing Approach for the Detection of Cyclooxygenase-2 in Live Cells,” was published in Angewandte Chemie, the journal of the German Chemical Society.

“One of the biggest challenges in developing probes is being able to selectively look at the enzyme in question,” Chan said. “The commercial assays that are used now work with both enzymes, which can cause significant interference.”

“To develop CoxFluor, we looked at the enzyme structure and found that COX-2 has a larger active site pocket and distinct interactions,” said Anuj Yadav, a visiting scholar in the Department of Chemistry at Illinois, who works in the Chan lab. “We attached arachidonic acid, to a bulky dye which gave us good selectivity for COX-2 compared to COX-1.”

The researcher’s stringent tests demonstrate that CoxFluor only works with COX-2 and not COX-1. “Yadav looked at a panel of enzymes that could have interfered with CoxFluor and showed through very careful characterization that there's no cross-reactivity,” Chan said.

“We also made a control compound that looks almost identical to CoxFluor,” Chan said. “The only difference was a small change in the arachidonic acid group. As a result, the molecule has all the physical properties of CoxFluor but it still didn’t show the same activity as the probe, further confirming the selectivity of CoxFluor.”.

Another advantage of using CoxFluor is that unlike the other probes it does not inhibit the activity of COX-2. CoxFluor mimics the natural target of COX-2 and gets processed by the enzyme to release a dye, which can be detected.

The probe has been tested in cell lines and the researchers are interested in testing it in other systems. “We are currently working on how to incorporate a much brighter dye, which can be used for deep tissues,” Yadav said.

The researchers also are interested in using the probe as a mechanism for killing cancer cells. “The concentration we are now using does not harm the enzyme. However, if we increase the concentration above a certain threshold, it could be a new mechanism for killing cancer cells,” Chan said. “This could be a very unique way to target cancer cells since we know that every cell in the body has COX-1 but COX-2 is only elevated in tumor cells.”

The Chan group collaborated with Illinois faculty Emad Tajkhorshid, a professor of biochemistry and the leader of the Theoretical and Computational Biophysics Group at Beckman, who helped with simulating how CoxFluor interacts with COX-2. They also collaborated with Aditi Das, an assistant professor of comparative biosciences and a member of Beckman’s 3D Micro- and Nanosystems Group, who provided different enzymes to show the selectivity of CoxFluor for COX-2.

The paper “An Activity-Based Sensing Approach for the Detection of Cyclooxygenase-2 in Live Cells” is available from the Beckman Institute or can be found at https://doi.org/10.1002/ange.201914845.