Kersh hopes to spark an interest in engineering at athletic camps

Young female athletes attending a recent basketball camp on the University of Illinois campus learned about the biomechanical applications of engineering through outreach activities organized by Mariana Kersh, the director of the Tissue Biomechanics Lab.

"Our goal with the girls’ basketball camp was to inform them of their options as they start making those basic career choices,” said Kersh, an assistant professor of mechanical science and engineering. “The participants were third- to eighth-grade girls. I want to provide them with the knowledge that if you like math, if you like studying the human body, and if you’re curious there is an opportunity to explore engineering.”

When Kersh was growing up, she wanted to be a surgeon because she believed that surgeons built tools that saved lives. She later found out that engineers design medical instruments. The realization motivated her to become a mechanical engineer. She has studied athletes, animals, aging women, and many other groups as part of her research on the mechanical and structural properties of bone, cartilage, and connective tissue such as ligaments. She has since tried to pique an interest in engineering in people who may not realize that engineering can have applications in biology.

One station demonstrated EMG or electromyography, which measures the amount of muscle activation. When the girls put on the EMG sensors and moved around, the machines registered a burst in muscle activity. “We were able to show them how we use the tools and they were able to use the same tools on themselves,” Kersh said.

Another demonstration used a force plate to measure how hard the girls pushed off the ground when they shot free throws. “We had some of the girls collect the data and everyone got to be part of a mini experiment to see how the success of a free throw is related to how hard you push,” Kersh said.

At another display, girls used passive walkers, self-guided toys that can move on a ramp without using any motors or energy inputs. “It was a cool activity. We learned about potential and kinetic energy,” a participant said. 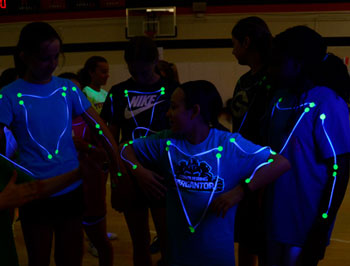 Camp participants learned about motion capture with black light tape and dots that highlighted their joints and muscles. (Photo by Elizabeth Renee Livingston)

Participants also learned about motion capture. “We talked to them at the beginning of the camp about how we use motion capture and our computer models for muscle force predictions. We had them put on black light tape and dots. At the end of the outreach session we turned the lights off, and brought out the black lights. They could look at themselves and see a skeleton,” Kersh said.

“Engineering isn’t just about planes and cars. You can understand the biomechanics of a basketball player or an athlete through engineering,” Kersh said. “I wanted to connect what we do with what these girls are interested in and I’m hoping this is a conduit for getting them interested in engineering.”

Kersh hopes to conduct more outreach activities in the future, including at a gymnastics camp. Her goal is to reach students who do not have access to engineering opportunities, but are interested in studying human motion and how it affects athletic performance.