Noah Trebesch, a graduate research assistant in the Theoretical and Computational Biophysics Group; Hyukjin Jang, a Beckman Graduate Fellow in the Chemical Imaging and Structures Group; and Kelly Hewes, a graduate research assistant in the Intelligence, Learning, and Plasticity Group, will present their research at the Beckman Institute Graduate Student Seminar at noon Wednesday, Nov. 7, in Room 1005 Beckman Institute. Lunch will be served. 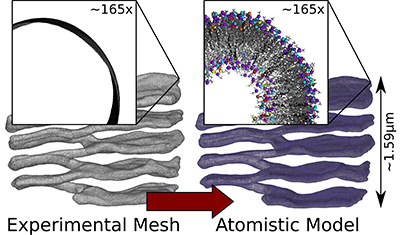 Membranes are fundamental to the function and structure of cells and organelles, and molecular dynamics (MD) simulations have the potential to reveal deep insights about the basic physics and biochemistry that produce their behavior. However, MD simulations of cellular membranes have been extremely limited up to this point due to the geometric complexity and sheer size of such membranes. To overcome these limitations, we have developed xMAS (Experimentally-Derived Membranes of Arbitrary Shape) Builder, software designed to turn low-resolution 3D meshes derived from experimental techniques into atomistic membrane models that can be simulated using MD. In the first application of this software, we have used an experimentally derived 3D mesh and lipid composition to develop a realistic atomistic model of a Terasaki ramp, a helicoidal membrane structure found at the junction between sheets of the endoplasmic reticulum. The model measures approximately 1.97μm by 1.59μm by 0.61μm and is composed of ~36.6 million lipids (~4.5 billion atoms), making it one of the largest atomistic biological models to ever be built. Building this model with xMAS Builder involved several methodologically innovative steps, including using MD to simulate ~36.6 million Lennard-Jones particles while attracted to grid-based potentials to optimize the packing of the membrane lipids, running billion atom MD simulations to fix ring piercings and other complex lipid clashes using a newly developed energy minimization technique, and utilizing grid-based potentials to equilibrate the model while maintaining its experimentally-derived shape. Simulations of the cellular membrane models built using xMAS Builder will allow us to computationally probe the complex  interactions that give rise to structural stability and function at an unprecedented atomistic level of resolution, and they will allow us to build better coarse models of the systems for simulation of longer timescale phenomena.

Hyukjin Jang, Ph.D. candidate in bioengineering and a Beckman Graduate Fellow in the Chemical Imaging and Structures Group 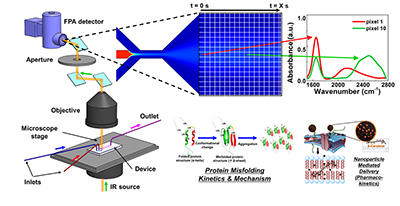 Properly functioning fundamental biomolecular reactions are critical for cell and tissue health. During reactions, early intermediates often arise within tens of microseconds; for example, the misfolding of proteins that emerge in sub-milliseconds can lead to a cascade of events that result in diseases (e.g. Alzheimer's). Current techniques for capturing sub-milliseconds reactions are impractical or have limitations. To overcome these barriers, the proposed research here combines emerging techniques of microfluidics, which accurately control biochemical environments spatially and temporally, with high-throughput Fourier Transform Infrared (FT-IR) imaging for acquiring data at the sub-millisecond temporal and structural resolutions. We developed a low-cost, easily accessible polymeric microfluidic device that enables rapid prototyping and high-quality IR spectroscopy by replacing the CaF2 window with a cyclic olefin copolymer (COC) film and integrated recent advances in high-throughput FT-IR hyperspectral imaging to achieve unprecedented time-resolution in IR spectra data. With this unique multidisciplinary approach, revealing molecular details of biomolecular events, as we aim to do here, is possible and the platform can be extended to study the structural integrity of therapeutic protein drugs.

Kelly Hewes, a graduate research assistant in the Intelligence, Learning, and Plasticity Group 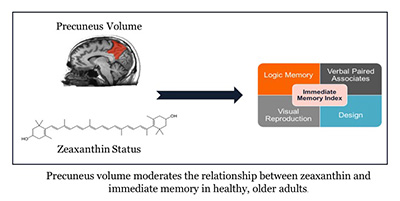