As medicine becomes more precise in delivering treatment targeted to specific areas of the body, the drug used is just one critical part of the treatment. How can chemotherapy drugs directly impact a tumor in order to destroy it without damaging other areas of the body? Scientists and physicians have to consider the material that carries the drug to its target and the effects of that material on our physiology.

Beckman researchers recently published a study in BioMacromolecules describing how a type of polymer, poly(zwitterions), interacts with proteins in biomedical applications. The researchers believe that the interactions are influenced by the configuration of charges on the polymer and protein involved. 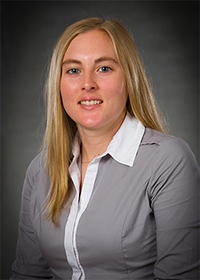 Beckman-Brown Interdisciplinary Postdoctoral Fellow Lydia Kisley was the lead author on the study, “Soluble Zwitterionic Poly(sulfobetaine) Destabilizes Proteins.” Martin Gruebele, a professor of chemistry, and Deborah Leckband, a professor of chemical and biomolecular engineering, are co-authors. In this Q & A, Kisley explains the results of the research.

“Zwitterion” is a fascinating name. Please explain what zwitterions are and what they do.

It is a fun word. “Zwitter” derives from German “Zwei” for “two,” while “ion” indicates charge. Therefore, these are molecules that have both positive and negative charges. By having both charges, zwitterions have interesting properties that have been used by Mother Nature—being on the surfaces of cells to prevent proteins from sticking to them, or helping cells/organisms respond to environmental stresses such as drought, salinity, extreme temperatures, UV radiation, and heavy metals. Inspired by these biological uses, engineers and polymer scientists developed biocompatible materials with zwitterion, such as nonadherent wound dressings, biosensors, stealth nanoparticles, and pharmaceutical stabilizers.

Poly(zwitterions) are polymers composed of zwitterionic monomers that have a number of uses. If a drug being delivered is a nanoparticle, these polymers can hide the nanoparticle from detection by the immune system so it can make it to the target. If the drug is a protein, these polymers have been shown to stabilize the protein so it will still function once it reaches the target.

The polymers are also being used in foreign biomaterials introduced to the body. Applications could include a bandage on a wound or an embedded biomaterial in the clinic, such as a continuous glucose monitor for diabetes, or a catheter. The polymer would prevent proteins from sticking to the material and then preventing bacteria from attaching and growing on the material, reducing the chance for infection.

Poly(zwitterions) also help biosensors by preventing other proteins from sticking and giving false detections when ideally only one specific type of protein should interact with the sensor.

Water plays an important role in how the polymers perform. You mention that poly(ethylene glycol) (PEG) is the “gold standard” for biocompatible materials. How can or do poly(zwitterions) differ and/or improve upon the delivery of biomedical applications?

There has been an explosion of reports showing poly(zwitterions) can outperform PEG in preventing proteins from sticking to the polymer or reducing the stability of a protein. A lot of these reports have been done from an engineering-based approach where the main question is “Does it work?” A lot of times the answer is “yes” and the researchers move on to the next application.

In simple terms, how did you conduct these studies?

The proteins have little reporters built into them (an amino acid called “tryptophan”). When we shine light on the reporters, they emit light (a “spectrum”) that reports information about what is around them, such as water, other parts of the protein, or something charged like the poly(zwitterion). We mixed the polymer and proteins together and saw changes in the reporter’s emitted light that indicated the poly(zwitterion) was interacting directly with proteins. We studied three different proteins and saw all three interacted with the polymer.

We used equipment in the Beckman Institute Imaging Technology Group to study the size of the polymers. Elizabeth Murphy, an undergraduate in chemistry, helped us with the study. It was great for her to be involved in an important aspect of the project and use the equipment independently at Beckman. She was able to share her research at the Undergraduate Research Symposium on campus at the end of the spring semester.

A lot of your work has focused on proteins and understanding their dynamics. What do you think is the next step in understanding how we can create biomaterials/biomedicines that will help with disease, yet not cause harm to the rest of the body, proteins in particular?

I think the next step is bridging our understanding from the protein-level that physicists and chemists like me have studied to the complexity of the actual use of biomaterials that engineers and doctors are interested in. Can we develop new ways of measuring that connect the molecular-scale of proteins to the large-scale of the patient and all the scales in between (cells, tissues, organs)?

You see this at Beckman from computational modeling of individual proteins and whole cells, to experimental development of materials, to imaging of human patients. I think the collaboration of Beckman scientists and engineers with the doctors at Carle Illinois College of Medicine will help expand this direction.

Your time as a Beckman-Brown Interdisciplinary Postdoctoral Fellow is coming to a close! What are your future plans, and how has your time at Beckman benefited your research/career, etc.?

Yes, I’m happy to share that I will be starting my own laboratory in the Department of Physics at Case Western Reserve University (lab website). I’ll expand their department in the area of experimental biophysics, which is definitely an interdisciplinary area. My time at Beckman gave me the opportunity to work with so many different scientists without barriers, and I was able to learn about and develop skills in new areas of science that I’ll incorporate into my future work. Also, I was able to have the independence to share my work and make connections with other scientists though conferences I otherwise wouldn’t have been able to attend. The freedom to pursue my interests through the fellowship has made me confident and excited about pursuing the next step in my career.