Brad Sutton, a professor of bioengineering, the technical director of the Biomedical Imaging Center at the Beckman Institute, and a faculty member of the Carle Illinois College of Medicine, was awarded the 2018 Beckman Institute for Advanced Science and Technology Vision and Spirit Award.

On the anniversary of Arnold Beckman’s birth, Brad Sutton, a professor of bioengineering, the technical director of the Biomedical Imaging Center at the Beckman Institute, and a faculty member of the Carle Illinois College of Medicine, was awarded the 2018 Beckman Institute for Advanced Science and Technology Vision and Spirit Award. 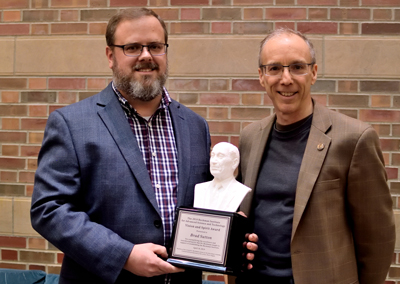 The award, in the amount of $150,000, recognizes a researcher at the Beckman Institute who exemplifies founder Arnold Beckman’s vision of excellence, interdisciplinarity, and collaboration. Beckman and his wife, Mabel, contributed $40 million to the institute, which opened in 1989.

Sutton’s research focuses on improving the physiological information available from magnetic resonance imaging (MRI) through the development of integrated pulse sequence and image reconstruction methods. His technological achievements have been a core part of the Beckman Institute’s work in cognitive aging; his algorithms are key to quantitatively assess brain structure and function along with its age-related changes. He also has been instrumental in developing techniques to evaluate brain elasticity (MR elastography) and neuromuscular coupling in the speech and swallowing system.

“Brad epitomizes what it means to be a Beckman Institute researcher,” said Jeff Moore, the director of the Beckman Institute. “He has established an active and meaningful relationship with Carle that exemplifies the benefits and impact that occur when Illinois' researchers learn what is relevant, important, and challenging to Carle physicians while they, in turn, gain from experiences and expertise that we have.

“Brad counts more than 20 Illinois faculty members as collaborators, and many more outside the university. His developments in MR technology have found immediate application in problems relating to tissue mechanical properties to the cognitive neurosciences, fast data acquisition and processing, and they have impacted other domains of interventional and developmental neuroscience. Brad truly can make our MRIs sing.”

“It’s great to get an award based on collaboration because I can’t take credit for it,” Sutton said in remarks at the reception. “It’s really about the people here that I work with on a daily basis. People who have the dream with you and then actually expect those dreams to come true … who could ask for more?

“To say that I owe my career to the Beckman Institute is an understatement. I’ve been here all 15 years since my Ph.D. and I know of no other way to do science than the way it’s done in this institute. What we have at Beckman is very unique. Yes, we collaborate, but we also trust, respect, and share a vision, and we really work together to make these things come true. So it really truly is a family here.”

The Beckman Institute for Advanced Science and Technology is an interdisciplinary research institute that was created as a way to bridge divisions between engineering and physical sciences and the life and behavioral sciences. More than $400M in research grants have funded projects at the Beckman Institute since 1992.