Beckman postdoc examines the effects of alcohol consumption during pregnancy 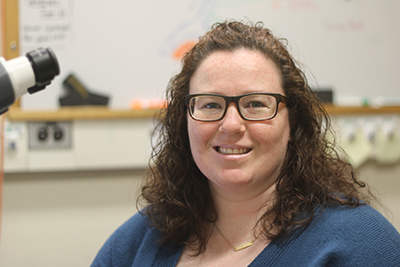 Beckman Postdoctoral Fellow Gillian Hamilton studies the effects of alcohol during pregnancy, the impacts on the child, and how these effects may be combatted.

According to a recent Centers for Disease Control and Prevention report, 1 in 10 pregnant women admit to any alcohol use and 1 in 33 report to binge drinking,” said Gillian Hamilton, a Beckman Postdoctoral Fellow. Hamilton focuses her research on how alcohol consumption during pregnancy affects the developing fetus.

The hippocampus is heavily involved in memory and learning, while the prefrontal cortex serves a crucial role in behavioral inhibition. Damage incurred during development of these areas of the brain can have far-reaching implications into adulthood. Hamilton believes that expanding understanding of how these areas are affected is a key step in educating the public.

Her past work specifically focused on the effects of binge drinking. Her most recent publication, “Behavioral deficits induced by third-trimester equivalent alcohol exposure in male C57BL/6J mice are not associated with reduced adult hippocampal neurogenesis but are still rescued with voluntary exercise,” was featured in the November 2016 issue of Behavioral Brain Research. It looks at this topic through a study that examined long-term influences on the hippocampus and prefrontal cortex development of either a single or repeated alcohol exposure during the third-trimester equivalent.

“Some pregnant women believe that during the third trimester, much of the baby’s body is already formed and therefore drinking alcohol will be less detrimental,” Hamilton said. “However, during the third trimester there is a period of mass neurodevelopment where a brain growth spurt occurs. Therefore, late developing brain regions such as the hippocampus and prefrontal cortex are especially sensitive to third-trimester alcohol exposure.”

In her research, Hamilton and colleagues studied these influences using mouse models, introducing alcohol postnatally in the equivalent of the third trimester of development.

Once the alcohol-exposed mice and a control group of mice matured, groups of each were provided exercise wheels to study how exercise affected their performance on passive avoidance and motor skill tests.

Hamilton noted that since, “alcohol-exposed animals required significantly more trials to learn the passive avoidance task, [it suggests] this [is] a learning deficit and not a motor deficit.”

Following the trials, key instruments in the Microscopy Suite were utilized to examine and calculate cell density and health within various parts of the brain that were exposed to amounts of alcohol similar to what would be considered binge drinking.

Because the alcohol-exposed mice that exercised regularly were able to learn the task more quickly than the non-exercising alcohol-exposed mice, Hamilton has concluded that exercise could serve as a therapeutic option for mitigating motor- and cognitive-related deficiencies caused by fetal alcohol exposure. However, more research needs to be completed to address other complications of exposure to alcohol in the womb.

Hamilton’s current research focus is on more moderate alcohol consumption and her interest stems from the frequency with which it occurs.

A present focus is in collaboration with Justin Rhodes in the Cellular and Molecular Foundations of Intelligent Behavior Group at Beckman.

“Using a ‘Drinking in the Dark’ model of alcohol exposure, developed by Dr. Rhodes, the pregnant mice are either given access to alcohol or tap water for four hours each day throughout their pregnancy,” explains Hamilton.

For those mice that drink the alcohol, the concentration is similar to what humans experience in “just over the legal limit.”

“Once their pups are born, I am interested in investigating how this alcohol exposure impacts brain development,” Hamilton said.

Hamilton hopes to further explore other treatment options for fetal alcohol exposure, and to continue to examine the effects of light to moderate alcohol consumption throughout a given pregnancy.