An associate professor of psychology from the University of Newcastle in Australia, Frini Karayanidis is collaborating with Gabriele Gratton and Monica Fabiani of the Mechanisms of Cognitive Control Group to look at how cognitive control varies as we age.

In 2001, Karayanidis met Gratton and Fabiani during a workshop on optical imaging at the University of Newcastle in Australia. Since then, the three have become not only colleagues, but also friends, meeting again in 2014 at a conference held in Brisbane, Australia, as well as several conferences held in the United States and Europe. 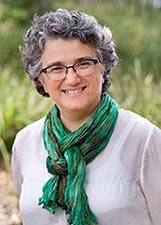 Recently Karayanidis traveled to the Beckman Institute for an extended stay as a Beckman Senior Fellow. The trio worked on a special issue of the journal Psychophysiology that focuses on the dynamics of cognitive control, using a variety of neuroimaging methods and experimental paradigms. The issue includes a number of authors and is expected to be published in 2017.

Karayanidis’ research group at Newcastle studies how we efficiently and adaptively apply cognitive control processes to optimize our behavior across the lifespan.

“My fundamental area of interest is understanding the complex interplay between neural processes and environmental influences that determine development of cognitive control across the lifespan,” explained Karayanidis. Cognitive control refers to adaptive or flexible behavior, including the ability to plan and anticipate, set goals, and adjust those goals as the environment changes.

“In recent years I've become interested in how these abilities vary across different individuals and impact real-life behavior. As our goals and needs change with age, variability in cognitive control affects us in different ways. And that’s why I'm examining different age groups. ”

“My fundamental area of interest is understanding the complex interplay between neural processes and environmental influences that determine development of cognitive control across the lifespan."--Frini Karayanidis, Beckman Senior Fellow

In a recent presentation that she gave at the Beckman Institute, Karayanidis illustrated this point using an example from road accident statistics which show that both young adults (under 25 years) and older adults (over 70 years) are over-represented in fatal traffic accidents.

While cognitive control failures are at the heart of many of these traffic accidents, the underlying cognitive control processes differ in the two age groups. In young drivers, fatal accidents often result from failure to flexibly reduce driving speed under treacherous conditions, whereas the accidents caused by older adults are frequently due to difficulty making timely decisions in complicated traffic situations.

Karayanidis’ research tests recent neurobiological models of adolescent risk-taking behavior. These models propose that increased risk-taking in adolescence results from an imbalance in the rate of maturation of subcortical reward networks and frontal cognitive control networks. This makes teens and older adolescents much more prone to reward-driven behaviors. Although often they can accurately identify the risks, they have greater difficulty abstaining from risky behaviors that are associated with social rewards – when asked why, teens will often report ‘it seemed worth it at the time’.

This strong interplay between the engagement of cognitive control and the disruptive effects of immediate short-term rewards is not restricted to children or teens. Karayanidis suggests that the distractive effect of cell phones or email notifications that most of us experience on a daily basis is one example of how immediate rewards can disrupt effortful cognitive ability in the young and in older adults alike.

Her Beckman visit has inspired a new collaboration with Gratton and Fabiani in the Cognitive Neuroimaging Laboratory. They intend to extend Gratton and Fabiani’s work with optical pulse imaging in healthy aging to examine the role of arterial elasticity on white matter health and associated cognitive control in patients who have had a mini-stroke.

This work will be conducted within the University of Newcastle’s Priority Research Centre for Stroke and Brain Injury, where Karayanidis heads the Psychological Processes Platform. This project will pioneer the use of event-related optical signals (EROS), a specialty of Fabiani and Gratton, and other optical technologies in studying stroke recovery and rehabilitation, enabling further collaborations between researchers in the United States and Australia.