In a collaboration with Carle Foundation Hospital, Beckman researchers have been using a new technique, magnetic resonance elastography (MRE), in a study of epilepsy.

Graham Huesmann, a neurologist and epileptologist at Carle, a research assistant professor of molecular and integrative physiology at Illinois, and a member of Beckman’s NeuroTech Group, and Brad Sutton, associate professor of bioengineering and member of the Bioimaging Science and Technology Group, are using MRE technology developed at Beckman by Sutton’s group in collaboration with Curtis Johnson, now an assistant professor at University of Delaware, to examine the brains of patients with mesial temporal lobe epilepsy, the most common form of partial or localization-related epilepsy.

“Seizures in this type of epilepsy start from one side,” said Huesmann. “If they are untreated, they spread to both sides of the brain. 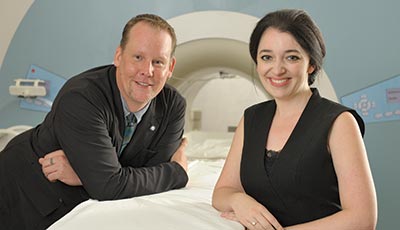 “It’s a type of epilepsy that becomes more and more resistant to medication over time. Catching it early is unfortunately rare: it is often a missed diagnosis for many years. If you do catch it early and have the patients on medication, they might get 10 years and then that medication fails, and then they’ve got a second medication. Then they get two years and both of those fail and they have to go to three medications, four medications, and all the while the seizures are damaging the hippocampal structures on both sides of the brain because the seizure activity spreads. Often the disease has progressed and caused damage even before a patient ever gets on medications for treatment.”

Effects can be damaging to lives of the patients, said Huesmann.

“Over time with accumulated damage added to the side effects of some of the medications, the patients become incapable of forming new memories. They can’t work, they can’t drive: the disease destroys their lives.”

Damaged tissue becomes hardened or sclerotic. Finding out what tissue is damaged is crucial to understanding potential treatments, including surgery, but because the brain is encased in a hard skull, it’s difficult to measure the stiffness of tissue. By gently shaking the brain while a patient is having an MRI performed, the MRE technology and computational power from Blue Waters at Illinois allows researchers to construct stiffness maps, which allow them to examine the mechanical structure of the brain in order to see which tissues have been damaged due to the seizures. 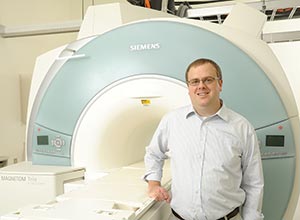 The goal of the clinical study is to identify the patients with the disease early and devise interventions that can help the patients maintain their quality of life.

“We learn a lot of information about how to stage their treatment and progression based on what the stiffnesses look like,” said Sutton. “Mechanical properties are a new piece of information that we wouldn’t have gotten out of the brain images in the past, so we’re really interested in what that means about the status of the tissue, how’s it related to other measures that we already get, like blood flow and function.”

“One of the clinical goals is to identify these patients early. Right now the state of the art clinical tools only identify the disease after damage has been done,” said Huesmann. “MRE looks very promising as a clinical tool that can easily and cheaply be used to diagnose these patients early, before damage has been done.  This will allow us to devise interventions, whether medication or device or surgery, as early as possible to prevent that gradual decline and degradation. We want to preserve as much of their quality of life as possible.”