Brain atlases can be used to compare magnetic resonance images (MRI) between subjects and research specimens.

“Most brain atlases, not surprisingly, are produced by neuroanatomists, histologists, and imaging experts,” Brozoski said. “We approached the project from the point of view of neuroscientists who use brain atlases to guide procedures.” 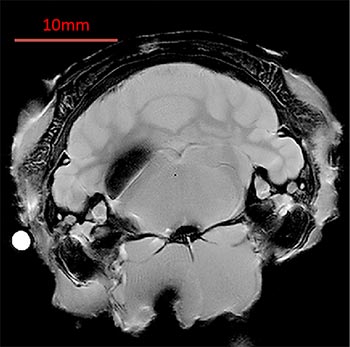 The objective of this project was to derive a high-resolution digital brain atlas of in situ MR images from adult Long Evans rats suitable for use in stereotaxic surgery applications. Using an ultra-high resolution 14.1 Tesla MRI scanner at the Beckman Institute, brain images were acquired ex vivo in a near natural state. Those images, particularly when combined with images derived from conventional histological sections, can be used to determine the coordinates of stereotaxic surgical targets with improved accuracy.

The atlas depicts brain images in three viewing planes indexed to the skull surface as well as to two skull landmarks. The atlas is presented in a .pdf file format that does not require specialized software for viewing, copying, or unpacking. A standardized reference grid provides high functionality for users.

“We empirically marked two skull landmarks, Bregma and Lambda. Each is shown as a bright dot on the images, allowing us to anchor our reference grid. You could think of them as longitude and latitude zero on a conventional geographic map,” Brozoski said.

“This atlas can be universal,” said Odintsov. “The present MRI atlas, to our knowledge, is the first available for adult Long-Evans rats, a pigmented strain widely used in behavioral and perceptual research. In our work, we try to find correlations between animals, in particular the rat brain structure, and make conclusions that can be applicable to humans.

“Other researches can take images from their studies, overlap them with ours, and make conclusions about particular areas. Our slices are 0.2 millimeters with a planar resolution of 50 micrometers, which is very precise—almost like histology.”

The researchers have been interested in examining the connection between chemical processes in the brain and disorders such as tinnitus.

The atlas has received nearly 500 views over the first week of its publication. By making this comprehensive, highly detailed atlas widely available, Odintsov and Brozoski are providing researchers around the world with a powerful tool for comparing specimens and data.

The atlas is a product of many collaborative efforts between Odintsov and Brozoski. This past February, the two were invited to speak at the 9th annual midwinter meeting of the Association for Research in Otolyrgnology.

The researchers hope to construct a comprehensive atlas of the human brain which will aid in research and medical diagnoses.

The atlas is publicly available in a PDF document that can be accessed at: https://figshare.com/articles/RatAtlas_2_0_Locked_pdf/3144955

Odintsov and Brozoski’s research is funded by the Office of Naval Research, National Institutes of Health, and the Southern Illinois University School of Medicine.