The next Graduate Seminar is held Wednesday, October 5, at noon in Room 1005. Brian Metzger from the Mechanisms of Cognitive Control Group, Shachi Mittal from the Bioimaging Science and Technology Group, and Fatemeh Ostadhossein, bioengineering, are the presenters. Lunch will be served.

Now you see me, now you don't: Brain activity associated with updates in visual consciousness

Binocular rivalry is a perceptual phenomenon that occurs when highly disparate images are presented separately but simultaneously to each eye.  Rather than fuse into a single image, perception alternates between them such that one image will dominate perception while the other is suppressed.  Given that changes in perception during binocular rivalry (i.e. perceptual reversals) are a consequence of changes in brain state, and not the result of physical changes in the images themselves, binocular rivalry serves as a valuable tool for investigating the neural correlates of consciousness (NCC).  In recent years, the P3b event-related potential (ERP) component has emerged as a leading candidate for the NCC. Using a probe-mediated binocular rivalry paradigm we asked what aspects of consciousness the P3b is indexing, and in particular whether it is associated with updates to consciousness. We not only found that the P3b predicted changes in consciousness (i.e. perceptual reversals) but a parietal positivity (consistent with a P3b) was systematically time-locked to the reversals (independently of their latency).  This suggests that this component more aptly reflects reversal-related updates in consciousness rather than probe-related attentional reallocation.  Finally, response-locked P3b amplitude but not latency was associated with the duration of an intermediate stage between reversals in which parts of both percepts coexist (piecemeal period).  Together, the data suggest that the P3b reflects an update in consciousness and the intensity of that process (as indexed by P3b amplitude) predicts how immediate that update is.

Shachi Mittal from the Bioimaging Science and Technology

Significance: Breast cancer survival rates and prognosis is highly dependent on the stage of tumor making early detection inevitable for improving patient outcome. The existing methods being used for clinical predictions are either lacking in the morphological or biochemical detail. IR imaging combines these two information levels to provide spatially resolved and quantitative information of biological samples. Currently, breast cancer diagnosis is limited by a large number of false positives and low throughput research. FT-IR spectroscopic imaging, on the other hand can be used to harness the encoded biochemical information in patient samples in an automated manner. 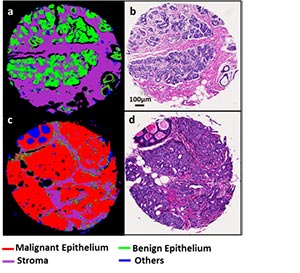 Research: The long term goal is to develop clinically translatable automated protocols by integrating concepts from different disciplines towards a post screening and a diagnostic tool for breast cancer detection. Our preliminary data analysis of 100 tissue samples and 47 patients suggests that High Definition (HD) IR imaging can distinguish between diseased states and different stromal configurations with an area under the receiver operating characteristic curve of more than 0.95. The rationale that underlines the proposed research is that the IR spectra from diseased and normal physiology provides distinct chemical information of a tissue sample which can be used to conduct digital pathology.

Investigation of the theranostic nanoparticles for biomedical applications

The utilization of particles at the nanoscale has emerged as an interdisciplinary area for early detection, diagnosis and therapy of diseases, which shows promises to understand the components, processes, and dynamics of a disease at a molecular level. The integration of diagnosis and therapy in tandem is known as ‘theranostic’ to tackle the bewildering conundrum of debilitating diseases such as cancer.  The high surface to volume ratio of nanoparticles have conferred them with the potential to ferry multiple therapeutic agents, target a specific biomarker or serve as beacons to shed light on the biological entities from minute molecular level to anatomical features.

In this talk the synthesis and characterization of novel nanoparticle developed as inherently therapeutic X-ray contrast materials for periodontal disease will be discussed. In addition, the follow up studies explored the potential for this novel system for bone imaging, traumatic brain injury via “hard” and “soft” particle approach. 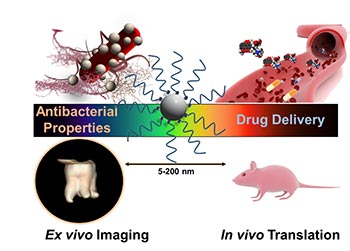 The other part of the talk will be devoted to discuss application of carbon dots as a drug delivery platform for the inhibition of cancer stem cells which was recently published in the journal Small (DOI: 10.1002/smll.201601161). Rigorous physicochemical characterization is performed using analytical tools in both hydrated and de-hydrated state. In vitro and in vivo efficacy and imaging studies with these particles will be highlighted, reaching sparse biological epitopes such as stem like cancer cells and others.