Technique for better analysis of metabolite levels in the brain

Researchers at the University of Illinois have developed a system to better analyze and improve the statistical power of magnetic resonance spectroscopy imaging (MRSI), which can lead to better analysis of metabolite levels in the brain.

Beckman researchers Ryan Larsen, Michael Newman, and Aki Nikolaidis are working on ways to compensate for those variables in order to achieve accurate measurement of metabolite levels in the brain and draw better conclusions about what those metabolites indicate and may influence, including mental illness, risk factors for various diseases, and markers for human traits such as intelligence and types of reasoning. Their recent study “Reduction of variance in measurements of average metabolite concentration in anatomically-defined brain regions,” was recently published in the Journal of Magnetic Resonance. 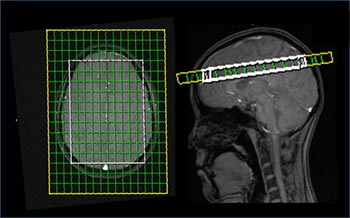 “Brain metabolites are some of the most prevalent molecules in the brain, and each has a unique magnetic resonance structure,” said Nikolaidis. “This allows us to assess the amount of a particular [metabolite] in a part of the brain.”

“When you go to the doctor and get your blood drawn, he doesn’t show you a picture of your blood, he shows you numbers,” said Larsen, research scientist at Beckman’s Biomedical Imaging Center. “Likewise, we need to have our MRSI be more quantitative.”

Larsen, a member of the Biomedical Imaging Center at Beckman Institute, and Nikolaidis, a former Beckman graduate student and now a postdoctoral fellow at the Child Mind Institute in New York city, measured N-Acetylaspartic acid (NAA), one of the most prevalent metabolites found in the brain in 72 adults, using several common corrective techniques to mitigate the variance of metabolite readings after the scans. In previous research, Larsen has shown that NAA may be an indicator of intelligence among various other qualities.

The full analysis scheme used data on the presence of water in the brain to help determine NAA concentration. The next phase used mapping data of the regions of the brain to account for the amount of each type of brain tissue and cerebral spinal fluid, which have different water concentrations in them. The cerebral spinal fluid has minimal metabolite concentration, which was also accounted for. The final stage was the integration of MRSI data over various regions in the brain.

They also performed three modified schemes lacking the water correction, tissue type correction, or data integration corrections respectively. For each post analysis, the variance between subjects was measured, and the researchers found that removing any one step drastically reduces the statistical power of the analysis, meaning additional spurious variance was still present in final measurements.

Through this scheme, the researchers were able to identify the importance of these accepted corrective measurements and how, in conjunction, they create a much more powerful system.

“People want to relate [metabolites] to things like intelligence, or physical fitness. People even relate this to things like personality and health state,” Larsen said. By reducing the spurious variance in these MRSI measurements, scientists are able to better correlate the measurements of these metabolites to those traits.

Larsen said the next step is to account for more individualized factors that vary from person to person and have an impact on metabolite readings.

The research is funded by the Center for Nutrition, Learning, and Memory.