Combining molecular dynamic simulations software, which studies the physical movements of atoms and molecules, and x-ray crystallography, a tool used for identifying the atomic and molecular structure of a crystal, Beckman Postdoctoral Fellow Abhishek Singharoy has developed a new methodology, xMDFF, that can interpret low-resolution and poorly resolved structures from x-ray crystallography experiments.

Abhishek Singharoy, a Beckman Postdoctoral Fellow, joined the Theoretical and Computational Biophysics Group (TCBG) in summer 2013. He works closely with Klaus Schulten, a full-time Beckman faculty member and professor of physics, who directs the TCBG. The goal of the TCBG is to understand the structure and function of biological systems at the atomic level.

“I study atomic structures: how a protein is built in terms of its atoms, how they’re positioned, how they move, how they change positions, and how their structure changes,” said Singharoy. 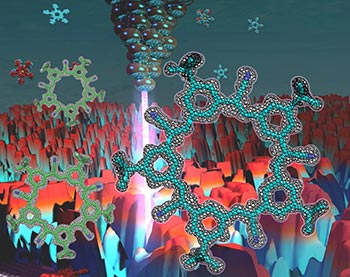 He began his career at Beckman by developing a computational methodology that could extract the structure of an atom out of electron density data, which measures the probability of an electron being present at a specific location in an atom.

Combining molecular dynamic simulations software, which studies the physical movements of atoms and molecules, and x-ray crystallography, a tool used for identifying the atomic and molecular structure of a crystal, Singharoy has developed a new methodology, xMDFF, that can interpret low-resolution and poorly resolved structures from x-ray crystallography experiments.

“If other experimentalists have electron density data, they can now use this tool (xMDFF) to convert the data into the atomic structures of proteins,” said Singharoy. “The tool has opened up new frontiers in terms of doing a different kind of science. That’s what I’ve been able to leverage.”

Using xMDFF and molecular dynamics simulations, Singharoy has been studying photosynthesis in proteins. Primarily focused on a primitive cell organelle found in bacteria, the chromatophore, Singharoy wondered how the organelle was converting its energy. 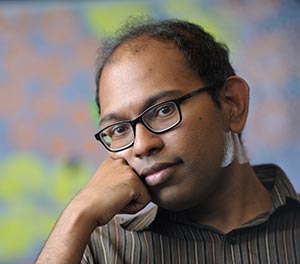 “How is this chromatophore absorbing and converting energy to ATP without losing that energy? Normally what happens is either the material shakes the energy off or the energy gets converted to a different form of energy to be utilized for a different form of action. In photosynthesis for example, the sunlight is converted into energy, it’s not shaken off,” said Singharoy. “So, why is this energy in the chromatophore is not being shaken off and being used in the right amount?”

Using the computational power of the Titan supercomputer located at Oak Ridge National Laboratory, Singharoy was able to model the chromatophore in order to study its structure in all atom resolution. From this structure, Singharoy has been able to understand how the organelle’s design allows energy storage.

His findings so far suggest the overall architecture of a chromatophore and interactions at the protein-protein interfaces within the chromatophore allow it to store energy for milliseconds. Specific details on Singharoy’s findings are currently unpublished, but will be available to the public by the end of the year.

Singharoy explains the importance of understanding photosynthesis lies in its relationship with respiration.

Singharoy previously studied diseases before joining Beckman in 2013. He received his Ph.D. from Indiana University, Bloomington, in chemistry under the guidance of Peter J. Ortoleva. During his Ph.D., he applied his research in all-atom simulation to work on computer-aided design vaccines against the human papilloma virus. He now plans to study how the shared protein functions in respiration and causes cardiovascular and neurodegenerative disorders.

Singharoy believes that Beckman has provided the best resources and people to make his postdoctoral research happen.

“We (postdoctoral fellows) were given a lot of freedom to be ambitious. We had security and that made me take on projects that are important to science. Without that kind of security, you don’t tackle difficult projects,” said Singharoy. “It has been an amazing experience.”

Singharoy plans to stay in academia after ending his fellowship.