Beckman Postdoctoral Fellow Tomasz Wrobel examines the chemical changes in tissues in order to predict the recurrence of prostate cancer.

“We are so close to the end goal,” said Wrobel.

Originally from Krakow, Poland, Wrobel began his undergraduate career at the Jagiellonian University in Krakow studying chemistry, then stayed to finish a master’s degree in the same field. As a part of the master’s program, he participated in an Erasmus Mundus program, Advanced Spectroscopy in Chemistry; the goal of the program is to enhance the quality of European higher education and create intercultural understanding through cooperation with third world countries. During that experience, Wrobel spent a year working and studying in France.

“My most important piece of education comes from what I’ve done in France, combined with what I did in Krakow,” said Wrobel. “The Advanced Spectroscopy in Chemistry program exposed me to a lot of different cultures and I had the chance to study things that are not available to me at my home university. I learned different techniques and different views. It was a really awesome experience.”

“One of the potential applications is for surgeons performing tumor removal. It’s difficult for a surgeon to determine which tissues are still cancerous: should they take it out or leave it? In certain cases, this can be extremely crucial. Our system can measure the tissue and say if it’s healthy or not. It’s a really big deal, especially if you think about brain cancer where every little millimeter removed is important. That’s crucial,” -Tomasz Wrobel

His experience inspired him to pursue a Ph.D. in the Faculty of Chemistry at his alma mater, where he completed his dissertation on “Atherosclerotic tissues and cells analysis by means of vibrational spectroscopy imaging and chemometrics.” Atherosclerosis is a disease in which plaque builds up in the arteries, and can lead to problems such as heart attack, stroke, or death. 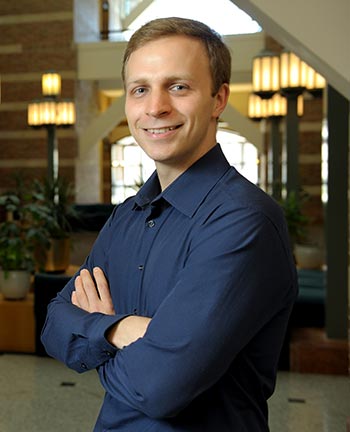 “I was researching atherosclerotic tissues, their chemical composition and how that relates to the disease’s progression, as well as how we treat the disease, and how it changes once treated,” said Wrobel.

The work of Rohit Bhargava, a full-time faculty member in Beckman’s Bioimaging Science and Technology Group, inspired Wrobel to come to Beckman.

“His research is the most interesting in our field, and I really wanted to work with him,” said Wrobel.

“The essence of my studies focuses on the chemical changes occurring in tissues in different diseases.

"Currently, we are looking at cancer. Cancer, when it develops, changes not only the morphology of the tissue but also the chemical composition,” said Wrobel.

This process has allowed Wrobel and other researchers to understand how a disease changes.

“Thanks to Bhargava, we created a proper model for how much changes throughout the disease. We can say whether its grade 2, grade 3, or grade 4 cancer,” said Wrobel.

Now, Wrobel said, they can also do this work in a spatial matter. Previously in spectroscopy, single point measurement was normally used. With new technology, Wrobel can create images of chemical composition distribution, which allows the researchers to create a visual margin of error.

Wrobel explained how important this is for the cancer community, especially surgeons.

“One of the potential applications is for surgeons performing tumor removal. It’s difficult for a surgeon to determine which tissues are still cancerous: should they take it out or leave it? In certain cases, this can be extremely crucial. Our system can measure the tissue and say if it’s healthy or not. It’s a really big deal, especially if you think about brain cancer where every little millimeter removed is important. That’s crucial,” said Wrobel.

Chemical spectroscopy focuses on the chemical composition overall, and can predict the reoccurrence of certain diseases, such as prostate cancer, with much higher accuracy. Wrobel hopes to increase the accuracy even more.

“Bhargava’s technique obtained an accuracy of 74 percent while the histology based prediction was close to guessing 63 percent. One of my projects is pushing that to 90 to 95 percent accuracy,” said Wrobel.

In addition to increasing the accuracy, Wrobel and his team hope to increase speed of the diagnosis. Recently there has been a change in the capabilities used, specifically in high-definition imaging. Previously, image distributions were compared to a pixelated optical image with some structure of the tissue. Now, Wrobel’s team is almost to single-cell resolution, which is much closer to optical techniques. This allows them to pinpoint a single cell that’s abnormal, instead of a whole region. While this breakthrough is exciting, creating the higher-resolution images requires more time.

“We’re working with a new source of infrared radiation that has improved the speed by 1,000. Instead of measuring a piece of tissue in an hour, we can do it in a minute. If you want to push this into the clinic, which is our goal, you need a fast method,” said Wrobel.

Wrobel understands the importance of accurate cancer diagnosis, especially in cases like prostate cancer, where the cancer is not always dangerous.

"Prostate cancer is quite variable, especially when it recurs, which is hard to predict. This leads to cases of over- and under-treatment for different patients," said Wrobel

“If you’re 85 years old and get prostate cancer, it’s important to know if you should get treatment or not based on the type of tumor. If not, there’s no reason to get chemotherapy, lose your hair, go to surgery, and spend time in the hospital. The predictions of how problematic it will be is the main reason why it’s misdiagnosed. Do you have to treat it or not? Our method will help that.”

Wrobel hopes his work with Bhargava will help improve cancer diagnosis and make the lives of people healthier and happier.

“In the cancer community, we need more precise diagnosis, so there will be less treatments applied to misdiagnosis. This can prevent stress and spending money unnecessarily. This also pushes the technology to be automated, because computers are more objective than humans. If we can make it automatic, it’s really safer,” said Wrobel.