Beckman Postdoctoral Fellow focuses on multitasking and how people deal with with new task demands.

Since 2013, Ward’s research focus has been on multitasking in today’s society and how people do or do not deal with new task demands. He also focuses on how individuals vary in multitasking depending on their age, and if an individual can improve his or her multitasking abilities with training. 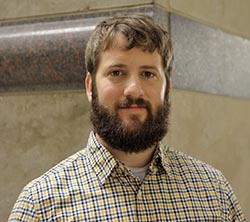 Ward finds his research with driving and pedestrian simulations at the Illinois Simulator Lab (ISL) particularly insightful. There, Ward is able to perform tests to see how people perform multiple tasks, such as talking to a friend, texting or changing a radio station, while driving and while walking.

“We looked at how people successfully approach a street and how people plan to cross a street without getting hit, and then how successful they are. We had people approach, prepare, and initiate a cross. Then we have them cross while they are distracted either by conversation or texting,” said Ward.

“The conversation about whether or not we should be distracted is an older debate. In some ways, the debate is now, ‘okay this happens, what can we do about it?' ”  -Nathan Ward

The findings are not surprising: multitasking behaviors can be very detrimental to a person’s safety. Ward, however, believes the conversation is no longer just about how dangerous the behavior is, because people are aware of the danger. He now believes the debate lies in the solution.

“The conversation about whether or not we should be distracted is an older debate. In some ways, the debate is now, ‘okay this happens, what can we do about it?’” said Ward. “People are going to do this, and we’re not endorsing it by acknowledging it. We’re acknowledging that it’s continuing to be a problem. Car manufacturers continue to put different interactive technologies into vehicles. You can now update Facebook and pick movie seats while in the car.”

He believes understanding why people feel the need to multitask is equally as important as spreading awareness of the danger.

“It’s easy for younger people to ignore and dismiss research that says this is really bad. There are really interesting ways in which researchers could try to engage and better understand what is rewarding about this for individuals. Because they’re doing it for a reason, and if we can understand that reason then maybe we can reduce its likelihood in the future,” said Ward.

One of Ward’s many projects also includes performing tests on younger adults as part of a project called INSIGHT, a multidisciplinary study to determine what kind of training best improves adaptive reasoning and fluid intelligence.

During the cognitive training phases of the INSIGHT project, Ward’s goal has been exploring how well people can transfer specific skills to other tasks, what Ward calls “far transfer.”

“If you train at one task, most people would agree you would get better at that task,” said Ward “For example, if you’re learning to type and keep typing, you’ll probably improve in typing. What is less clear is if improving at typing translates into improving at another task, like playing the piano.”

His findings suggest that far transfer is often elusive but that approaches other than cognitive games, such as brain stimulation and exercise, show promise in terms of their effects on cognition.

“Transcranial direct current stimulation (tDCS) or low-current brain stimulation often leads to enhanced performance (higher accuracy and faster response times) on cognitive tasks. As an illustration, imagine you are learning to type. Receiving tDCS during this process might improve your performance, though more research is needed to determine whether these real-time improvements in performance can lead to more generalized far transfer,” said Ward.

Another aspect of his research includes cognitive training with older adults with casual video games, like Angry Birds or Fruit Ninja, organizing them into categories including attention and memory, and seeing if playing these casual games improves performance on tests.

“While there were some interesting results in a previous study that involved college students, we found training on these video games did not lead to improvement in other cognitive constructs for older adults. This opens a discussion for how to best adapt a training design to be fun and effective for older adults,” said Ward.

Before Beckman, Ward received his Ph.D. in cognitive psychology at the University of Utah in Salt Lake City.

“The lab I came from was smaller and there weren’t as many opportunities for collaborative work. I like how collaborative Beckman is. It offers me the infrastructure for what I want to research. The available resources and labs are important to me,” said Ward.

Ward will be starting as an assistant professor in the psychology department at Tufts University in July. He will be teaching courses on multitasking and perception, and in both his teaching and research, he says he will continue to build on his experiences at Beckman.

“I’ve enjoyed the unique resources, new ideas, and new collaborations across various disciplines at Beckman and will try to re-create similar opportunities wherever I go,” said Ward.