Jeffrey Moore, the Murchison-Mallory Professor of Chemistry and professor of materials science and engineering, has been named interim director of the Beckman Institute, effective April 16.

The Institute, home to more than 600 researchers and staff and more than $18 million in external research funding to date in FY16, pursues interdisciplinary research in the physical sciences, computation, engineering, biology, behavior, cognition, and neuroscience.

“The Beckman Institute is one of the most prominent research institutes in the world, and I know it will continue to flourish under Jeff’s leadership,” said Peter Schiffer, vice chancellor for research at the University of Illinois at Urbana-Champaign. 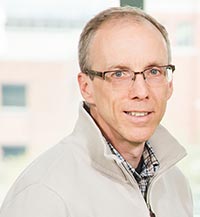 A Beckman faculty member since 1994, Moore has served as co-chair of Beckman’s Molecular and Electronic Nanostructures theme, and is a member of the Autonomous Materials Systems Group. He was interim head of the Department of Chemistry from 2012-2013, and in 2014, he was named a Howard Hughes Medical Institute Professor. He is also lead investigator on a Department of Energy Joint Center for Energy Storage Research (JCESR) project entitled “Non-Aqueous Redox Flow Battery.”

“For anyone who thrives on interdisciplinary research, our Beckman Institute is an absolute gem,” said Moore. “What a privilege it will be working with its outstanding staff and faculty as the interim director.”

Moore has published over 300 articles covering topics from technology in the classroom to self-healing polymers, mechanoresponsive materials and shape-persistent macrocycles. He is a Fellow of the American Academy of Arts and Sciences, the American Chemical Society and the Royal Society of Chemistry, and has received numerous awards for his contributions to teaching and research.

He received his B.S. in chemistry in 1984 and his Ph.D. in materials science in 1989 from the University of Illinois. He was an assistant professor at the University of Michigan before joining the Illinois faculty in 1993.

Moore replaces Art Kramer, an original faculty member at the Institute, who served as director from 2010-2016. Kramer is retiring from the University of Illinois. Identifying a permanent Beckman leader is a top priority for the campus, and Schiffer said that the goal is to have that person in place by January 2017.

“Art has been a capable and visionary leader, and I am grateful for his long-standing commitment to the University,” Schiffer said. “I have every confidence that Jeff will build on this successful track record to lead the Institute in the coming weeks and months.

“Jeff is an accomplished scholar and researcher and I’m confident in his ability to lead the Beckman and continue the great tradition of innovative research at the University of Illinois,” Kramer said.

Beckman, which celebrated its 25th anniversary in 2014, works to transcend the limitations inherent in traditional university organizations and structures. The Institute was founded on the premise that reducing the barriers between traditional scientific and technological disciplines can yield research advances that more conventional approaches cannot. Researchers from University of Illinois departments as far-ranging as psychology, computer science, electrical engineering, physics, chemistry, and bioengineering make up Beckman Institute groups.