Robert Motl, a professor of kinesiology and community health at Illinois, utilizes the Biomedical Imaging Center (BIC) at Beckman to examine how exercise impacts neuroplasticity in people with multiple sclerosis (MS).

MS is a prevalent neurological disorder that affects nearly 2.5 million people worldwide. The protective coverings of nerve cells are damaged, which leads to diminished function in the brain and spinal cord.

“It’s also a disease where you have a lot of problems – cognition, walking, fatigue, depression – that we don’t know how to manage and greatly affect people’s quality of life,” said Motl. “We’ve been doing research on this campus looking at exercise and physical activity as techniques to restore major functions of people with MS.”

Motl recently finished a six-month study that tested different types of exercise modalities on 64 people with MS in order to examine how fitness is related to markers of brain health. Participants, who ranged from ages 18 to 64, performed either a combination of aerobic, resistance, and balance training or stretching exercises. Researchers conducted magnetic resonance imaging (MRI) scans before and after this protocol as well as cognitive and walking tests.

“Our research with BIC is about trying to understand the neuronal correlates of all this using MRI,” said Motl.

Motl focused on two major functions that are significantly impacted in many people with MS – cognition and walking ability – by examining how physical activity is related to brain structure, specifically in the thalamus and basal ganglia. According to the National MS Society, nearly half of all people with MS will develop cognition problems. 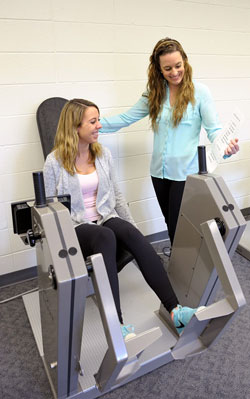 “We’ve been doing research on this campus looking at exercise and physical activity as techniques to restore major functions of people with MS." -- Robert Motl

Participants in the study who had larger thalamic volumes were able to walk further over a six-minute period and had greater walking endurance. The thalamus controls a person’s gait, the cadence and length of stride.

“Basically the building blocks of everyday walking are better,” said Motl, referring to participants in the study. “We’ve established that exercise seems to be beneficial for improving walking outcomes of people with MS.”

Lizzie Hubbard, one of Motl’s research assistants, worked alongside BIC technical director Brad Sutton to create a script for analyzing the pre- and post-MRI data, in addition to leading participants in the exercise component of the study.

“I wanted to see how the brain is impacted by exercise, and this was the place to be,” said Hubbard.

The clinical research suggests that exercise could serve as a form of rehabilitation for stopping, slowing or even reversing the effects of MS.

Motl plans to pursue more ways in which exercise can be used as a preventive and restorative technique to improve the quality of life for people with MS and “help them live the best lives possible in the context of a disease that is incurable and unpredictable.”