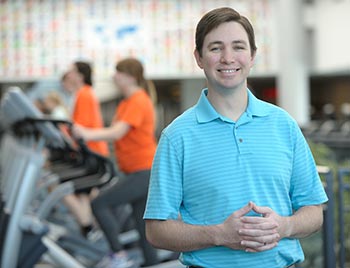 John Biggan, one of the Beckman Institute’s Postdoctoral Fellows, explains that while his research may be complicated, the motivation behind the research is quite simple.

“Exercise is good for the brain,” said Biggan.

Originally from Arlington, Texas, Biggan received his bachelor of fine arts in theater with a minor in psychology, and both his master’s of science and Ph.D. degrees in experimental psychology from the University of Texas at Arlington. After studying experimental psychology with a combination of cognitive psychology and imaging work, Biggan began focusing on cognitive aging. His interests led to a partnership with a kinesiologist, and their work turned into Biggan’s first postdoctoral job in Arlington.

“When I was writing papers and doing research, the same names kept popping up,” said Biggan. “I kind of figured if I wanted to work in this field, I should go work with the top people and they were all at Beckman.”

From there, the road to Beckman was a relatively easy choice.

“When I was writing papers and doing research, the same names kept popping up,” said Biggan. “I kind of figured if I wanted to work in this field, I should go work with the top people and they were all at Beckman.”

Now, after a year in Beckman’s Postdoctoral Fellowship program, Biggan has two research emphases: cognitive aging in older adults and the cognitive effects on children whose mothers are physically active during pregnancy.

The first component studies the effects of exercise on cognitive aging. As Biggan explained, cognitive aging is made up of a person’s memory and executive functions, such as the ability to switch tasks. Biggan uses exercise interventions to hopefully slow down the cognitive aging process and make life for older adults better.

Biggan offered a few explanations. Exercise may help the cardiovascular system move more resources, such as glucose, oxygen, and proteins in the blood, to the brain consistently and effectively. Another reason could be the release of neurotrophic factors during exercise.

“Neurotrophic factors are molecules that help brain neurons communicate with one another, to increase their connections. These have been described as ‘Miracle Gro’ for the brain when you perform aerobic exercise,” said Biggan.

Lastly, Biggan studies how the physiology of musculature in the body affects the brain during exercise. This gives insight into what is causing changes at the brain level.

The second part of Biggan’s research came him from a simple thought.

“I had this ‘a-ha’ moment; I spent so much time with older adults that I forgot older adults have to first be kids, then younger adults, and then middle-aged adults,” said Biggan,

This insight led Biggan to think back to the earliest time a person exists, when he or she is still inside the womb. He asked, “What happens when a pregnant mother is engaging in regular physical exercise?” A mother and fetus share so many resources that proteins, like neurotrophic factors, released on the muscular level during exercise should be shared with the baby.

“What are the long-term effects of physical activity on an infant while still in the womb?” asked Biggan.

Biggan understands the importance of his research for people concerned about their own cognitive aging or their aging processes.

Biggan hopes his research motivates people to improve their lifestyles to benefit their future selves.

“Most people know that exercise is good for them, but they still don’t do it. The benefit of what we’re doing here is that we can give people one more reason to go out and take care of themselves physically because they realize this will also help them mentally,” said Biggan.

Biggan plans to spend another year finishing his fellowship at Beckman before finding a faculty position at a research institute.