Because of his interests in rocketry and space camp, Philip Barnett chose to study aerospace engineering at the University of Illinois.

Originally from Good Hope, Illinois, Barnett grew up with a passion for outer space.

“I loved watching shuttle launches, building LEGO spaceships, and having little plastic astronauts roam the surface of the distant planet that was the sandbox in my backyard,” said Barnett. After years of 4-H projects and model rockets, Barnett attended Space Camp in Huntsville, Alabama, where he studied space exploration, saw cutting-edge technology, and piloted a simulated shuttle mission.

“It was easy to see that everyone was excited about their work, which made it an easy decision to choose aerospace engineering as my major four years later,” said Barnett.

The summer before his junior year at Illinois, Barnett became involved with the Undergraduate Research Opportunity Program (UROP), sponsored by the Illinois Space Grant Consortium, part of NASA’s National Space Grant College and Fellowship Program through the Department of Aerospace Engineering at Illinois. UROP pairs undergraduate students with a graduate student mentor. Barnett was paired with Stephen Pety, a fifth-year Ph.D. in materials science and engineering and a member of Beckman’s Autonomous Materials Systems Group. 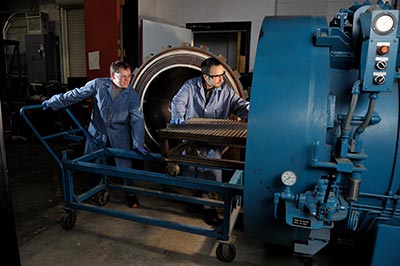 Barnett and Pety work on microvascular carbon fiber composites under the direction of Scott White, the Donald Biggar Willett Professor of Engineering and Beckman faculty member in the Molecular and Electronic Nanostructures Group.

“I absolutely love going into work every day, so I can’t really imagine doing anything else." --Philip Barnett

The goal of their research is to develop a method to produce microvascular carbon fiber composites and test their thermal management capability and crashworthiness.

The group’s experiments show that microvascular carbon fiber composites could replace the cooling system in electric vehicles, while also providing protection in crashes.

The growing concern of safety in electric cars makes their research very important.

“Electric vehicle battery cooling is an issue you have to be really careful with because if batteries get too hot, they can reach a point of thermal runaway, at which point the batteries keep getting hotter until they catch on fire,” said Barnett. The material surrounding the batteries can also reach high temperatures in a runaway scenario, creating a dangerous chain reaction.

In addition, even mild increases in battery temperature lead to decreased cycling performance and lifetime. Ensuring cooling in these batteries is necessary for electrical cars to operate efficiently and safely. Battery packaging material must also sustain itself in a crash scenario to protect the batteries and occupants.

Barnett explained this research could be used in other fields as well.

“Obviously transportation is really important; electric vehicles are an increasingly good option right now. You could also use this technology for electronics cooling, such as putting small microvascular networks inside a circuit board to keep it cool. It could also be applied in the aerospace industry, as a way to prevent aircraft icing, as well as cool transonic aircraft,” said Barnett.

Barnett then manufactures cooling panels. He hot presses a sacrificial polymer (PLA) into a sheet and uses a laser cutter to cut out a network with the desired shape. He then embeds the network between carbon fiber fabric in a vacuum-assisted resin transfer molding (VARTM) layup. He impregnates the layup with epoxy and cures it in an oven. After curing the panel, he cuts it to size and places it into a high-temperature vacuum oven to vaporize the PLA. This technique is known as the vaporization of sacrificial components (VaSC) and it produces a channel network in the shape of the original PLA network.

Once the panel is ready to test, Barnett places it on a resistive heater that heats the panel similarly to how a battery would heat the panel in an electrical vehicle. Coolant is pumped through the panel while the surface temperature is monitored with an infrared camera. Cooling performance is evaluated for different network designs and compared to finite element simulations. Results show that these cooling panels could adequately cool batteries in an electric vehicle.

In addition to cooling tests, Barnett completes crush sample testing. The purpose of these tests is to determine whether or not microvascular channels affect the performance of carbon fiber composites in crash scenarios.

Instead of using dry carbon fiber fabric to form these samples, Barnett uses fabric that has been pre-impregnated with resin (“prepreg”). He stacks prepreg layers over an aluminum mold, with PLA fibers placed between the middle layers to form channels. The mold has a corrugated shape to produce samples that resist buckling. The prepreg assembly is covered with a vacuum bag and cured with heat and pressure in an autoclave. After being cured, the PLA fibers are removed with VaSC as before to form straight channels.

Barnett crushes the samples using an Instron materials testing machine. The samples absorb energy from mechanisms such as matrix failure, fiber failure, and delaminations. The specific energy absorbed for each sample is calculated using load-displacement data. Results show that composites with small volume fractions of channels perform just as well as composites without channels.

Barnett thinks his time spent as a researcher in the lab at the Beckman Institute has helped him decide on his future career path.

“I absolutely love going into work every day, so I can’t really imagine doing anything else,” said Barnett. He plans to continue with graduate school and eventually receive his Ph.D.

“Beckman has a lot of really smart and really nice people,” said Pety. “We have great equipment and resources and funding, but the people are what really make Beckman work.”