Martha Gillette, professor of cell and developmental biology at Illinois, has studied the brain for most of her life. Her current work focuses on improving the lives of those affected by brain disorders.

Gillette and colleagues at Beckman Institute were awarded more than $2 million from the National Institutes of Health (NIH) BRAIN Initiative to develop an analytical platform that can lead to new developments in neuroscience and create diagnostic and therapeutic opportunities in treating neurological diseases.

“BRAIN awards are collaborative grants involving people from different disciplines and a lot of innovative technology,” said Gillette. “This innovation award was possible because of the vigorous collaborative nature of research at the Beckman Institute and the investigators' drive to interact beyond their usual disciplines. One of the exciting aspects is that students are attracted to working at the interface of neuroscience, chemistry, and engineering."

The cross-disciplinary initiative, which is scheduled to span three years, will inspect molecular and chemical structures of the brain with advanced imaging techniques. Gillette and Sweedler work in Beckman’s NeuroTech Group, while Bhargava is from the Bioimaging Science and Technology Group.

“This innovation award was possible because of the vigorous collaborative nature of research at the Beckman Institute and the investigators' drive to interact beyond their usual disciplines. One of the exciting aspects is that students are attracted to working at the interface of neuroscience, chemistry, and engineering." -- Martha Gillette

Gillette studies memory formation by examining electrical properties in the hippocampus, one of the key brain structures where experience becomes encoded and stored for future use. It is also a site where memories are lost in aging and neurological disease.

“Our proposal was to look at the activity of neurons and couple this with the distinct chemical signatures of individual cells--a feat not previously accomplished,” said Gillette. “The language of the brain is electricity. In my own work, over the last couple of years, I have become very interested in looking at a part of the hippocampus called the dentate gyrus.” 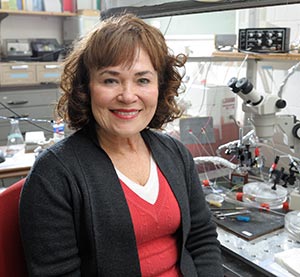 The dentate gyrus is the gatekeeper of the hippocampus, which controls several brain functions, such as learning, memory, and spatial organization. By observing functional changes that occur in this portion of the brain, Gillette is able to further inspect how the brain allows the body to record, store, and retrieve vast quantities of information.

Sweedler and Bhargava are working to develop an analytical platform that integrates two of the most powerful chemical characterization approaches, mass spectrometry and Raman scattering microscopy.

“This is a great marriage of two analytical techniques that perfectly complement each other,” said Bhargava. “It allows us to advance our particular imaging technology into a new area.”

Mass spectrometry is a technique that coverts molecules into the gas phase so that they can be manipulated by external electric and magnetic fields. Since the sensitivity of mass spectrometry has improved significantly over the past decade, researchers can work in single cells rather than with much larger amounts of tissue.

“Rather than just getting a wealth of complicated spectra, we are going to use the training set from the mass spectrometry to give us chemical information for Bhargava’s spectroscopic images,” said Sweedler.

Bhargava uses both infrared and Raman spectroscopy to look at the vibrations of brain molecules. Raman and infrared spectroscopy are commonly used in chemistry to provide a pattern by which molecules can be identified. This form of imaging shows different cells and regions in brain slices based on different vibrational frequencies in molecules.

By constructing these detailed molecular images and coupling them with functional characteristics of individual cells, Gillette and her colleagues are able to examine substrates of memory in the brain and find new ways to treat, cure, and potentially prevent neurological diseases.