With various tools in Beckman’s Microscopy Suite and Visualization Laboratory, researchers can decode the variations that arise from natural selection.

The Microscopy Suite features a range of state-of-the art instruments to provide researchers from various disciplines with the ability to image and analyze a variety of biological, material, and biomaterial specimens. The knowledgeable staff provide training and expertise ranging from sample preparation to light microscopy, from electron microscopy to micro- and nanoCT.

The bioCT scanner, which can collect 3D x-ray datasets, has become integral to the research of Charles Roseman, an associate professor in anthropology and an affiliate faculty member in Beckman’s Cognitive Science Group. Roseman, an evolutionary anthropologist, is looking at the natural selection on patterns within and among populations’ genetic and phenotypic diversity at various timescales.

“The shoulder and the hip perform a number of critical functions ranging from allowing us to move to providing the physical context for giving birth,” said Roseman. “Developing a better understanding of how genes and environments act to build a healthy organism provides crucial context for studying diseases of and injury to the shoulder and hip and for modeling how differences in form and function evolved among species.”

We look at primates and humans and try to quantify how their limbs and girdle elements move, in order to see why locomotor behavior has diverged in primates. We humans are bipedal, a lot of other primates aren’t, they walk on all fours or they are mostly arboreal, hanging from trees. They have different structures, so we’re looking at why these girdles have contributed and how they’ve changed to allow us to walk on two feet.- Florence Lin

“Mice have very similar features of the different parts of the body that are related to the girdles and the limbs,” said Florence Lin, one of Roseman’s research assistants. “Even though they aren’t primates, they have closely related features, and the genes that contribute to the development of these parts of the body are actually very similar, so we can use these genes as a comparative study.”

Lin, a 2014 graduate in anthropology, has been scanning various mice bones in order to understand diversity in limb and girdle elements, such as the hip and shoulders. Most recently, she has been scanning more than a thousand tiny mice humeri in order to help identify the set of genes that have been instrumental in the growth and development of various biological features.

“We look at primates and humans and try to quantify how their limbs and girdle elements move, in order to see why locomotor behavior has diverged in primates,” explained Lin. “We humans are bipedal, a lot of other primates aren’t, they walk on all fours or they are mostly arboreal, hanging from trees. They have different structures, so we’re looking at why these girdles have contributed and how they’ve changed to allow us to walk on two feet.” 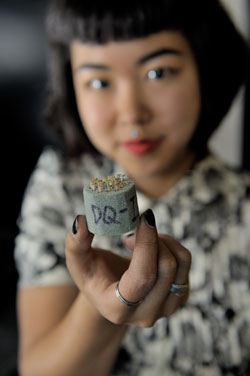 Lin uses the bioCT scanner to examine large groups of the small bones.

“Right now I’m working on mouse humeri,” said Lin. “We have a little over a thousand stuffed into florist foam and we place them inside the bio-CT scanner, which rotates and takes about 720 images in a 360- degree motion.”

After about an hour, Lin can access the 3D reconstruction, which she then takes to Beckman’s Visualization Lab, to crop the images and take measurements that capture different aspects of form and function of the bones.

“We do analysis on size and relationships between different bones,” said Lin, noting that a previous study examined the scapula. Roseman uses computer software to perform genetic analyses to identify locations in the genome that produce individual differences.

The Microscopy Suite’s bioCT scanner is critical to her work, said Lin. “It’s one of the most powerful machines available for imaging in 3D. We want to create these highresolution images so that we can do specific measurements and get good quality results.”

“The bio microCT instrument Florence uses is the most versatile of the CT systems in the Microscopy Suite,” said Scott Robinson, manager of the Microscopy Suite. “It can be configured to allow us to minimize the x-ray energy, for example, to provide the best possible contrast, permitting us to image and record subtle differences between sample components.

“It benefits, as well, from the expert maintenance and training provided by Leilei Yin, who supervises all of our CT systems, among his other responsibilities. None of this would be possible, of course, without the leadership of the Beckman Institute, whose support allows us to continue to provide state-of-the-art imaging systems.”