Arielle Rausin, an undergraduate student in the College of Business, toured the Visualization Laboratory (Vis Lab) at the Beckman Institute as part of a class that encouraged students to create objects with a 3D printer at the Illinois Maker Lab.

“I thought, ‘Wouldn’t it be cool if I could replicate these gloves without having to go through this long and expensive process?’ ” said Rausin, who is currently training to qualify for the 2016 Summer Olympics in Rio.

To use the gloves, racers look at the wheel like a clock. They make contact with a metal ring on the wheel that fits into a groove in the glove at 1 o ’clock, drive to 4 o ’clock, and when they reach 5 or 6 o ’clock, they flick their wrists to send the peg back up to 1 o ’clock and repeat the cycle. Competitive racers can do this motion about two times a second. 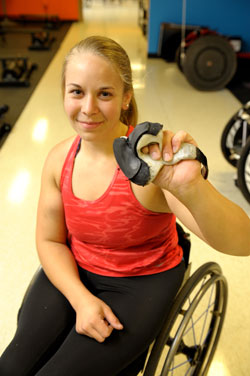 Rausin and Ross are working with Deana McDonagh, industrial design professor and Beckman faculty member in the Human Perception and Performance Group, to advance the process even further. Instead of scanning an existing glove, the team hopes to design a process that could scan someone’s hand and make a glove based on their exact hand structure. This would eliminate the need to scan an expensive, custom glove.