The next Director's Seminar of fall 2015 is scheduled for October 8, featuring Nancy Sottos, materials science and engineering professor and part-time faculty member of the Autonomous Materials Systems Group. The presentation will start at noon in Beckman room 1005, and lunch will be provided.

The Evolution of Vascularized Polymers and Composites

Integration of microvascular networks in synthetic materials provides an effective vehicle for the distribution and replenishment of active fluids throughout the material, enabling a plurality of biologically inspired functions such as self-healing, regeneration, self-sensing, self-protection, and self-cooling. Several approaches exist for fabricating complex microvascular networks in structural polymers and composites including soft lithography, laser micromachining, electrostatic discharge, and fugitive inks. In our most recent work, sacrificial material consisting of the biopolymer poly(lactic) acid (PLA) is treated with a tin catalyst to accelerate thermal depolymerization and formed into sacrificial templates across multiple dimensions and spanning several orders of magnitude in scale: spheres (0D), fibers (1D), sheets (2D), and 3D printed. The templates are embedded in polymers and composites and are removed using a thermal treatment process—vaporization of sacrificial components (VaSC)—leaving behind an inverse replica. This seminar describes the progression of microvascular materials from relatively primitive networks to heal small cracks in a polymer coatings to fully three-dimensional bio-inspired vasculature integrated in multifunctional fiber reinforced composites, to the use of vascular delivery for regeneration of new material following catastrophic, large scale damage. 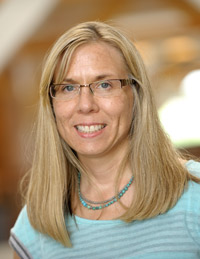 Nancy Sottos is the Donald B. Willet Professor of Engineering in the Department of Materials Science and Engineering at the University of Illinois Urbana-Champaign. She is also a co-chair of the Molecular and Electronic Nanostructures research theme at the Beckman Institute. Sottos started her career at Illinois in 1991 after earning a Ph.D. in mechanical engineering from the University of Delaware. Her research group studies the mechanics of complex, heterogeneous materials such as self-healing polymers, advanced composites, and thin film microelectronic devices, specializing in micro and nanoscale characterization of deformation and failure in these material systems. Sottos’ research and teaching awards include the ONR Young Investigator Award (1992), Outstanding Engineering Advisor Award (1992, 1998, 1999 and 2002), the R.E. Miller award for Excellence in Teaching (1999), University Scholar (2002), the University of Delaware Presidential Citation for Outstanding Achievement (2002), the Hetényi Award from the Society for Experimental Mechanics (2004), Scientific American's SciAm 50 Award (2008), Fellow of the Society of Engineering Science Fellow (2007), and the M.M. Frocht and B.J. Lazan awards from the Society for Experimental Mechanics.