Matt Rosenberger (3D Micro- and Nanosystems), Ariel James (Cognitive Science), and Aaron Schwarz-Duval (Bioimaging Science and Technology) will present on Wednesday, September 16 at noon in Beckman room 1005 as part of the Graduate Student Seminars. Lunch will be served. 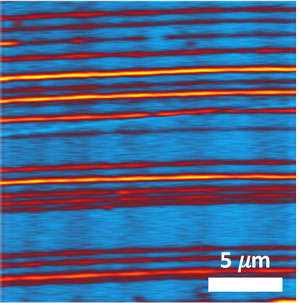 This work describes atomic force microscope infrared spectroscopy (AFM-IR) measurements on single-walled carbon nanotubes (SWCNTs) with diameters near 1 nm. In AFM-IR, an AFM tip measures nanometer-scale thermomechanical expansions induced by an IR laser. This technique enables IR absorption measurements with approximately 100 nm spatial resolution. Because AFM-IR is governed by nanometer-scale photothermal responses, it is challenging to measure very small structures and structures with small thermal expansion coefficients. In this work, we place a thin polymer layer between the SWCNT sample and its substrate, which amplifies the thermal expansion of the sample by up to two orders of magnitude due to thermal isolation of the CNT and large thermal expansion of the polymer. We report infrared absorption measurements of individual metallic and semiconducting SWCNTs. The signal enhancement and full width at half maximum (FWHM) of the thermomechanical expansion increases about linearly with polymer thickness, up to a polymer layer thickness of 150 nm. This behavior indicates a tradeoff between signal amplification and spatial resolution. The FWHM is 33 nm for 15 nm thick polymer. We use the SWCNT measurements and simulations to construct a model to recommend appropriate polymer thickness depending on the sample absorptivity and desired spatial resolution.

Reading Thomas Pynchon Relates to Predicting "The Boy Will Eat the Cake"?
Adults seem to naturally predict upcoming input as they listen to someone speak, and the development of this ability during childhood has been found to be closely related to vocabulary skills (e.g. Fernald, Perfors, & Marchman, 2006). But after we are mature language-users, do individual differences in language experience continue to shape our abilities to listen predictively? In this talk, I will describe two studies that investigated whether individual differences in language experience among literate adults impact the rapid prediction of upcoming spoken words in sentences such as "The boy will eat the cake". In the first study, participants with higher scores on the language experience tasks, including vocabulary and author recognition tests, showed more evidence for rapid predictive processing. The second study replicated this finding, and found that it occurred even when other cognitive factors, including working memory and inhibitory control, were taken into account. This work provides evidence that differences in language experience continue to impact processing throughout adulthood even for relatively simple spoken sentences. Future work on this project will be aimed at further exploring the mechanisms that underlie this relationship. 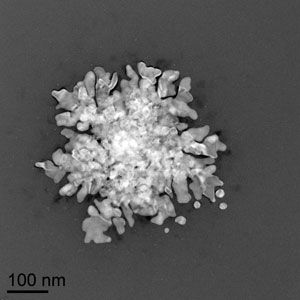 Gold has continued to be of scientific interest throughout the majority of mankind's existence. Initially for its luster, used as currency and in recent decades gold has been found to have many other applications in electronics and medicine. At the nanoscale, gold has been applied toward drug delivery, diagnostic imaging contrast enhancement, and photothermal ablative therapies. We describe our preliminary findings on a novel synthetic methodology initiating morphological differentiation of highly controlled branched gold nanostructures. The morphological differentiation was fundamentally driven by incubation temperature, time, and environmental pH. Differentiated morphologies varied from dendritic, snowball, to polyvillic. This differentiation approach initiates a myriad of shapes using relatively low temperatures in aqueous solution wherein the branching can be finely tuned. The extent of branching, size of nanostructure and morphology found to be facilitating cellular internalization with significant loading could be detected by bright field imaging, and Raman spectroscopy. Origin of near infrared absorbance in these nano-differentiations enunciate their probable use in a broad spectrum of biomedical uses ranging from in vitro diagnostic to tissue penetrating detection agents.