The first Director's Seminar of fall 2015 is scheduled for September 10, featuring Jonathan Sweedler, chemistry professor and part-time faculty member of the NeuroTech Group. The presentation will start at noon in Beckman room 1005, and lunch will be provided.

The Cell by Cell Chemical Characterization of the Brain: from New Tools to New Insights

In the postgenomic era, one expects the suite of chemical players in a brain region to be known and their functions uncovered. However, many cell-to-cell signaling molecules remain poorly characterized and for those that are known, their localization and dynamics are oftentimes unknown.

A suite of bioanalytical approaches are described that allow the investigation of individual neurons and small brain regions; these approaches include capillary scale separations coupled to mass spectrometry and direct mass spectrometric-based profiling and imaging. Several applications of single cell analysis are highlighted, including investigating novel serotonin neurochemistry, determining the role of d-amino acids in the brain, and characterizing the peptides in single cells.

Specifically, new serotonin-related compounds and literally hundreds of new neuropeptides have been characterized in well-defined neuronal networks, and in several cases, the functional roles of these molecules described. Imaging mass spectrometry and dynamic sampling of the extracellular environment are used for elucidating novel cell-to-cell signaling molecules in a range of neuronal model systems. To characterize rare cells, presorting approaches such as flow cytometry or other high-throughput methods that can perform large number of direct single cell measurements have advantages.

For high-throughput mass spectrometry (MS) measurements, we perform optical microscopy-guided single cell profiling. The cells are deposited onto a microscope slide, their locations on the slide determined using microscopy, and these locations guide subsequent MS analysis to each cell. We have validated these approaches by assaying populations of tens of thousands of cells including neurons and endocrine cells.

Intriguingly, our laser desorption MS does not use most of a single cell contents in a measurement, so the rare cells can be located and used for follow-up profiling such as immunohistochemical staining, metabolomics, and potentially even transcriptomic measurements. Hence MS becomes a high-throughput screening approach to locate rare cells that can be used for follow-up studies.

Our overarching goal is to uncover the complex chemical mosaic of the brain and pinpoint key cellular players in physiological and pathological processes. Several additional examples of neuropeptide and neuromodulator discovery are described across a range of metazoan life. 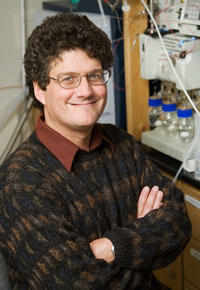 Jonathan Sweedler received his Ph.D. in chemistry from the University of Arizona in 1988, spent several years at Stanford before moving to the University of Illinois at Urbana-Champaign in 1991 where he has been ever since. At Illinois, he is currently the James R. Eiszner Family Endowed Chair in Chemistry, director of the School of Chemical Science, and affiliated with the Carl R. Woese Institute of Genomic Biology and the Beckman Institute for Advanced Science and Technology. His research interests focus on developing new approaches for assaying small volume samples, and in applying these methods to study novel interactions between cells. These analytical approaches include micro and nanofluidics, miniaturized separations, mass spectrometry, and NMR. He has used these tools to characterize small molecules and peptides in a range of animal models across metazoan life and in samples as small as individual cells and cellular domains. Sweedler, with large international teams of biologists and technologists, has performed comprehensive interrogation of the genome, transcriptome, and peptidome in Aplysia californica, Schmidtea mediterranea, Apis mellifera, Taeniopygia guttata, Strongylocentrotus purpuratus, and other models to uncover signaling peptides and pathways involved in wide range of functions and behaviors.

Sweedler has published more than 400 manuscripts and presented 400 invited lectures. He has received numerous awards including the Merck Prize and the ACS Award in analytical chemistry. He is a fellow of both the American Association for the Advancement of Science and the American Chemical Society. He is currently the editor-in-chief for the journal Analytical Chemistry, the highest ranked journal in the field of analytical chemistry.