The last Director's Seminar of the semester is scheduled for April 30, featuring Beckman Postdoctoral Fellows Suma Bhat and Heather Lucas. The presentations will begin at noon in Beckman room 1005, and lunch will be provided.

Advances in natural language and speech processing have enabled the development of computer-aided language learning systems. A critical component of these systems is the ability to make objective assessments of language proficiency - written or spoken. We discuss novel automatic measures of language proficiency and evaluate their effectiveness in the context of a state-of-the-art operational spoken language assessment system. Our results have natural implications in the domains of natural language processing and second language acquisition. 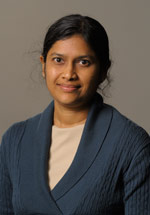 Suma Bhat received her Ph.D. in ECE from the University of Illinois at Urbana-Champaign in 2010. Her research interests lie primarily in the areas of speech and natural language processing and more recently in human-computer interaction. She is currently a Beckman Institute Postdoctoral Fellow where she has been working on advancing personalization of learning systems.

It is well-established that certain memory abilities decline across the adult lifespan. This phenomenon is often characterized as loss of information retention (or more "forgetfulness") with age. In my talk, I will discuss situations in which differences in memory performance can instead reflect changes in how younger and older adults initially process and explore to-be-remembered information. I will demonstrate that during learning, individual differences in the structure in older adults' exploratory eye movements—quantified using Shannon entropy—relates to performance on both laboratory and neuropsychological tests of memory. I will also provide evidence that older adults' use of certain verbal encoding strategies is constrained by the ability to flexibly retrieve information during online language processing. Finally, I will argue that the mechanisms that underlie these age-related changes to learning behaviors are not independent of those associated with declines in long-term memory. Rather, these phenomena reflect a role of the neurocognitive architecture of memory in the selection and optimization of goal-directed behaviors, including memorization strategies. 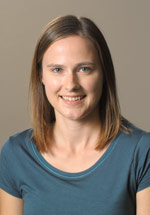 Heather Lucas completed a Ph.D. in psychology in August 2012 from Northwestern University. Her primary research focus is on the neural bases of human memory processing and the changes that memory undergoes both along the course of normal aging and as a result of age-related neuropathology. As a Beckman Postdoctoral Fellow, Heather has collaborated with Neal Cohen and Kara Federmeier to identify ways in which age-related changes to memory and language systems can affect the ability to optimize learning by selecting and utilizing appropriate memorization strategies. In addition, Heather has worked with a team of Beckman researchers—including Neal Cohen, Eddie McAuley, and Art Kramer—to identify combinations of cognitive and psychosocial measures that can effectively probe the underlying causes of subjective memory concerns in older adults without overt memory deficits.