The science of spherification: a lecture on avant-garde cuisine & live cooking demonstration

Dr. Chris Chipot, a Beckman senior fellow, will present a special lecture at 2 p.m. on Friday, December 12, in 1005 Beckman, detailing his expertise in avant-garde cuisine and its correlation with material science.

Chris Chipot is the research director at National Center for Scientific Research (CNRS) in France and the co-director of the Associate International Laboratory between CNRS and the University of Illinois. He came to the Beckman Institute in October of this year to work closely with Klaus Schulten, director of the Theoretical and Computational Biophysics Group, on the Associate International Laboratory that they co-direct. As an accomplished biophysicist, Chipot also has a passion for avant-garde cuisine, and he uses this skill to influence his research.

“For the first time in my life, I managed to combine my two passions,” Chipot said, “my job as a theoretician and cooking.”

The Science of Spherification

One of the most iconic forms of avant-garde cuisine, also known as molecular gastronomy, involves the presentation of flavorful, edible liquids—ranging from exotic cocktails to simple olive oil—packaged into spheres. This technique, known as “spherification” was invented 70 years ago, but became popularized only recently by renowned avant-garde cuisine chefs like Ferran Adriá or Heston Blumenthal. The process of making the spheres involves packaging the liquid ingredients in envelopes of calcium alginate, a gelatinous substance made mostly out of molecules extracted from brown seaweed.

In this lecture, Chipot will present the foundations of avant-garde cuisine and review a number of techniques from its repertoire. In particular, he will describe the physical principles of spherification and show how new insights can be gained from computer simulations into the formation and stability of alginate spheres. He will further show that the same gelling agent can be utilized in material science, notably to solubilize otherwise insoluble carbon nanotubes.

After detailing, at the molecular scale, how alginate chains spontaneously wrap like a net around liquid droplets and how calcium ions are key to this process, he will demonstrate live, with a portable kitchen, spherification of fruit juices for the audience to taste. 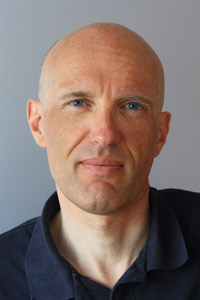 Christophe Chipot received his Ph.D. in theoretical chemistry in 1994 from the Henri Poincaré University, in France, conducting research on intermolecular potentials with a fellowship from the Roussel Uclaf Institute. Following a postdoctorate in the Department of Pharmaceutical Chemistry of the University of California in San Francisco, he became a National Research Council postdoctoral fellow at the NASA Ames Research Center. He joined the CNRS in 1996 at the University of Lorraine, where he worked on the modeling of the biological membranes by means of computer simulations, while developing original approaches for free-energy calculations and the exploration of rare events. His developments also extend to the accurate description of intermolecular interactions, including induction phenomena. He received his habilitation in 2000 and was promoted research director in 2006. Since 2012, he has been directing an Associated International Laboratory established between the CNRS and the University of Illinois at Urbana-Champaign.