Research staff in the Visualization Laboratory stitched several hundred images of an 800-year-old figurine together to create a 3D interactive image for the Illinois State Archaeological Survey (ISAS). In the ISAS archives are hundreds of objects that are not publicly shown. The 3D imaging will allow ISAS to showcase these pieces of history on its web site, so researchers from around the world can have access. 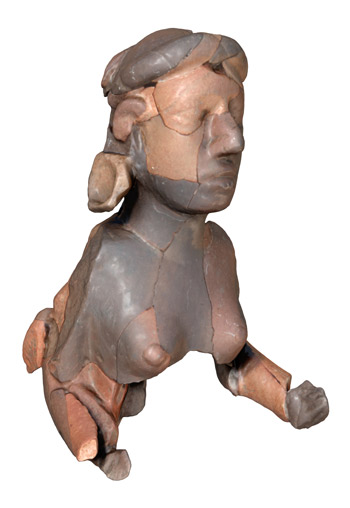 History was captured in a whole new way in the Visualization Laboratory (Vis Lab) this past year. With a high-quality digital camera, strategic lighting, and 3D image construction software, an 800-year-old stone figurine was brought to life.

Researchers in the Vis Lab compiled hundreds of individual photographs of the Sponemann figurine to create a 3D pdf image that allows users to rotate and zoom in and around the image. Download the zip PDF file (5,000KB).

The Illinois State Archaeological Survey (ISAS), a division of the Prairie Research Institute at the University of Illinois, worked with Travis Ross, manager of the Vis Lab, and Nathan Bajandes, graphic specialist in the lab, to create these images.

“One of the major concerns of the public is gaining access to objects in storage in scientific repositories. Three-dimensional imaging allows a way to make these items available to a wider audience,” said Thomas Emerson, director of ISAS. “In fact, because we can put them up on the web, they are available on a global level, rather than to just the few people who might visit a museum display. Our pilot project with the Sponemann figurine was an effort to determine if this approach was economically and technically feasible.”

With the Vis Lab’s macro-photography suite, Ross and Bajandes captured several photos of the entire surface of the 6 x 12˝ figurine, and used Agisoft, a program that stiches images together, to reconstruct the high-quality three-dimensional image.

In the future, ISAS will make 3D pdfs of its objects available on its web site so the public can view the images in lifelike detail.

The photography suite, which features 20 MegaPixel DSLRs and a professional photo and video studio, was added to the Vis Lab in the past year. The Vis Lab also offers a range of highly advanced equipment for imaging and video needs. Users can take advantage of numerous capabilities, including graphics services such as 3D rendering, photography, and image enhancement for journal covers and presentations; scientific research support that includes image analysis, animation, and video production; as well as 2D and 3D object scanning.

Ross said work in 3D has become a focus of the lab, as evidenced by many students, faculty, and groups like ISAS that use the multiple 3D modalities available. The staff of the Vis Lab assist in updating software and meet the specific design and simulation needs of the researchers.

Steve Boppart, a Beckman faculty member and director of Imaging at Illinois, is a frequent user of the Vis Lab. Boppart understands the vital role the lab plays in ensuring users meet their research goals.

“Our Vis Lab plays an essential role in research, and in sharing our results with our scientific communities, with our colleagues across disciplines, and with the general public. By turning seemingly complex information into visual forms, it becomes possible to express the meaning, importance, and beauty of the work,” Boppart said. “In doing this, the staff and users in our Visualization Lab have the power to inspire a sense of wonder, and to motivate us to keep asking the questions that drive our paths forward toward discovery and innovation. Data without visualization is simply like paint without the painting.”

A note on the figurine:

The Sponemann figurine dates to the 12th century A.D. and is associated with the people who created the archaeological site of Cahokia, North America’s first city. The 6 x 12" figurine was excavated by survey crews in the 1980s from a burned temple building a few miles from the current Cahokia State Historical site in Collinsville, Illinois. The figurine is made from an unusual material known as Missouri flintclay from sources just west of St. Louis. The image is of a young woman who likely represents the Corn Mother, a prominent deity in native societies. She is often shown with symbols representative of plants and serpents, all markers of the Underworld that are associated with life renewal and fertility in native cosmology.