Identical twins Patty Jones and Cathy Murphy have a few differences: One has long, wavy hair, the other’s hair is shorter and straighter. One has lived on the West Coast, and the other in the Southeast. One is a chemist, and one is an engineer with a background in psychology.

However, genetic and professional similarities far outweigh their differences: First-generation college students at Illinois, Ph.D.s in their respective fields, and now colleagues at the Beckman Institute.

Jones is the associate director for research at the Beckman Institute. Murphy is a Beckman affiliate in the Nanoelectronics and Nanomaterials Group, and a professor of chemistry.

“In high school, we tried to make a more conscious effort to be different,” said Murphy. “And maybe a little more in college too, but once we weren’t actually in the same town, I think we ended up converging, you know, to a potential energy minimum. Which means that we’re not too different.”

Their divergent interests became evident in their undergraduate studies. Murphy found herself drawn to the physical sciences, in particular chemistry, while Jones developed more of an interest in the social sciences.

The twins began their academic careers as undergraduates at the University of Illinois in 1982. Both sisters say that undergraduate research experiences were critical to their careers.

In Jones’ case, she got involved freshman year through Psych 290, an independent study class that is still offered.

“My first experiment was to run subjects through a motor control experiment led by Professor Jack Adams,” said Jones. “I did several of these classes all the way through my bachelor’s career. I also got accepted into the psychology bachelor’s honor thesis option, so I did an honor’s thesis with Chris Wickens, who taught my introductory psych class.

In high school, we tried to make a more conscious effort to be different. And maybe a little more in college too, but once we weren’t actually in the same town, I think we ended up converging, you know, to a potential energy minimum. Which means that we’re not too different. - Cathy Murphy

“He taught the intro to experimental psychology class, which was general. Then he came into freshman orientation and talked about engineering psychology and that’s when I decided that’s what I wanted to do.”

Murphy similarly began with under-graduate research in chemistry labs as a freshman.

“I started (with research) my second semester freshman year through the summer, through sophomore year, through junior year, all the way through until I graduated, with Tom Rauchfuss,” said Murphy. “So I was involved in several chemical research projects—I could see how it all worked. And I thought, ‘I can do this, I can go to grad school.’ If I hadn’t done undergraduate research, I don’t know if it ever would’ve occurred to me to go to graduate school.”

Murphy received two bachelor’s degrees in 1986: one in chemistry and one in biochemistry. She then headed to the University of Wisconsin-Madison for graduate studies.

“When we told our parents that we were going to grad school, their response was: ‘You mean you can’t get a job?’ ” said Murphy. “And then, ‘We’re not paying for that!’ ”

Fortunately for their parents, graduate studies came with financial assistance. Murphy worked with Art Ellis at Madison. Her dissertation topic was rational tuning of the optical properties of semiconductor surfaces by molecular adsorption. As a postdoctoral fellow at California Institute of Technology she worked with Jackie Barton on electron transfer through DNA.

Her independent academic career began at the University of South Carolina in 1993, and she returned to Illinois in 2009. Her research pulls together all her previous experience since she looks at the interface of materials chemistry, inorganic chemistry, biophysical chemistry, and nanotechnology.

“My research program is all about inorganic nanoparticles,” said Murphy. “We have to make these things, control their size, control their shape, which means in the case of metals, we can control their optical properties, meaning the colors of light they absorb, what they scatter, what they reflect, etc. And we do a lot of surface chemistry on them, so that gets back to my Ph.D. work a little bit.

“One thing I’m very interested in is in how these nanoparticles interface with biological systems. We have been finding that when you bind proteins to your nanoparticle, your protein doesn’t act like the same thing anymore. So just figuring a bound biological molecule is going to be 100 percent active (which is what many people assume for cancer targeting) is not a good assumption.”

A main research question focuses on gold and silver nanorods, which can be “painted” with different chemical groups that allow the nanoparticle to be measured and followed throughout a system, similar to the way that green fluorescent protein allows biologists to follow biological functions in an organism.

However, the light emitted by green fluorescent proteins is often not bright enough to follow or can be extinguished. Murphy hopes that her research can create particles that can be identified at different wavelengths and could be used concurrently.

“That would enable completely artificial biomolecules with a core that you can follow easily, optically, in a biological matrix,” said Murphy.

In this work, Murphy has partnered with researchers in the Bioimaging Science and Technology Group, including Rohit Bhargava and Stephen Boppart. She has also worked with Martin Gruebele from the Nanoelectronics and Nanomaterials Group.

Jones’ graduate career began at Georgia Tech, where she received a master’s and Ph.D. in industrial and systems engineering. After receiving her doctorate, she returned to Illinois as an assistant professor of industrial engineering in 1991. 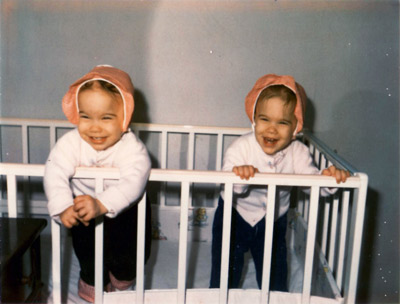 “My lab was called Human-Computer Cooperative Problem Solving, or HiCCuPS,” said Jones. “We studied different kinds of teams in complex, highly automated systems, so we did things with NASA, the Army, some stuff with the Navy. I had NSF grants that were more on the computer science side, looking at human-machines/human-technology interactions.”

She became a Beckman affiliate in the Artificial Intelligence Group, and was involved in a grant from the Army Research Laboratory on advanced decision architectures. Led by Tom Huang and George McConkie, the grant had more than 20 professors involved on the project.

“It was the whole question of data fusion or management, we didn’t call it big data at the time,” said Jones. “How do you put this together to have a person make a good decision? It’s still a big research question. And it was really fun to work on. I really enjoyed doing that kind of thing and it was different than what I could do by myself, in my home department.”

In 2001, Jones resigned her tenured position at Illinois and moved to California to pursue a career in management at NASA Ames Research Center. She started as the deputy chief of the Human Factors Division and was eventually promoted to deputy director of Exploration Technology.

In 2011, Murphy, a Beckman affiliate by that time, sent Jones the announcement for the job of associate director for research at the Beckman Institute, a position newly created by Art Kramer, director of the Institute. Jones had worked with Kramer while at Illinois, as colleagues in the Engineering-Psychology Joint Program.

“Cathy sent me this email and I thought, this sounds like all the fun parts of my job at NASA,” said Jones. “So I wrote to Art, and he encouraged me to apply, so I did.”

Jones started as the associate director for research at the Beckman Institute in March 2012. Returning to Illinois not only provided Jones an opportunity to be near her sister, but it also allowed her to contribute to the research culture at Beckman. Both sisters agree that other institutions don’t provide the same support and culture that can be found here.

“At my former institutions, if you wanted to do anything, you had to do it all yourself,” said Murphy. “If you wanted to make connections to other people, you had to go find them. The fact that Beckman is here means that if I want to be part of some group, I can. Also the seed grant program was a great thing for me, because it’s real money that you can pay students with to try something collaborative.”

As Jones assists Beckman faculty members in identifying research projects and maneuvering through policies and procedures, she also relishes the chance to be a part of a variety of projects. She is currently serving as project manager on the INSIGHT project, led by Aron Barbey, which aims to develop evidence-based tools and methods that may improve the quality of human judgment and reasoning in complex, real-world environments.

“I’m happy where I am,” said Jones. “I think my interests have broadened, so it’s much more fun to be a generalist at this point for me. I have my Beckman bookshelf, with books on cell biology, biomedical imaging, nanobiophotonics, memory, control theory, attention, climate change, cognitive neuroscience … I like learning about all these different things, and I like helping other people be successful.

“That’s the essential motivation of a teacher and a manager—helping other people succeed.”