Rubin passionate about understanding the nature of traumatic brain injury 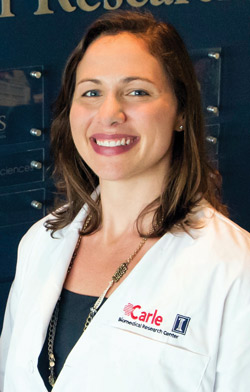 Working with a group of patients who have hippocampal amnesia was a compelling experience for Rachael Rubin, who spent her years as a Ph.D. student at the University of Illinois studying this unique form of memory loss. Even after Rubin visited the patients at the University of Iowa several times, they never remembered meeting Rubin, let alone her name or why she was visiting them.

Those with hippocampal amnesia have sustained damage restricted to the hippocampus, a part of the brain that forms memories. After the injury, patients can no longer form what is called declarative memories, or memories about new information, like what happened yesterday or meeting someone for the first time and learning his or her name.

Explained by patients as “always living in the moment,” hippocampal amnesia presents challenges as patients try to move forward with their lives.

“It does have a significant impact on their lives. That’s what I was really struck by,” Rubin said. “Some of them had families before their injury. Their roles as a parent had to be significantly reduced. There were certain things they just couldn’t do—putting together a schedule, remembering to-do lists. Others were being taken care of by their parents or lived in a nursing home. Their ability to live independently was really impacted.”

After closely observing this life-altering injury, Rubin became passionate about finding ways to improve the lives of those with brain injuries. After she finished her Ph.D. in cognitive neuroscience, she received the 2014 Carle Foundation Hospital–Beckman Institute Fellowship and decided to get involved in studies of patients with traumatic brain injury (TBI).

“I wanted to not only understand the brain and how it works, but also how brain injuries affect people’s lives. I was aware of how much great neuroscience research goes on at Illinois, but, at the same time, there was a lack of clinical or patient research. Through this fellowship with Carle, I thought we could do really great work by bringing them both together,” Rubin said.

With the fellowship, funded by Carle Foundation Hospital, scientists spend three years conducting independent, translational research in oncology or neuroscience. To kick-start her work in TBI, Rubin met with faculty and staff from both Beckman and Carle, who have all expressed interest in building a collaboration to study TBI.

“I’ve made it my mission to develop a patient registry of TBI patients,” Rubin said. “The area of TBI has overlap in my hippocampal amnesia work because memory impairment is a big part of TBI. TBI is caused by an external force—like an impact to the head—that causes the brain to hit against the skull and cause injury. Memory and executive function, or mental processes that help connect past experience with present action, are often impaired.”

Though traumatic brain injuries are classified as mild, moderate, and severe, even mild TBIs are still traumatic by definition, says Rubin. Brain function can be significantly impaired regardless of the severity, and it’s often difficult to tell how quickly patients will recover across the broad spectrum of severity.

“What is still not understood is that even in a particular category, let’s stay mild, some people will recover completely within 10 days and be functioning just fine, but then there’s other people who have more or less a similar injury, but will still be struggling to recover after months. That’s something that we don’t understand right now,” Rubin said.

TBIs are an all-too-common injury for many people: millions are affected every year, Rubin says.

“It could be someone in a car accident, an older person who has a fall, violence related, soldiers who have blast-related injuries, and of course athletes like those (sustaining head injuries) in football,” Rubin said. “It’s a common problem, but we still just don’t know enough about it.”

I wanted to not only understand the brain and how it works, but also how brain injuries affect people’s lives. I was aware of how much great neuroscience research goes on at Illinois, but, at the same time, there was a lack of clinical or patient research. Through this fellowship with Carle, I thought we could do really great work by bringing them both together. - Rachael Rubin

Rubin is working with faculty members at the Beckman Institute, including Neal Cohen, Aron Barbey, Art Kramer, Wendy Heller, and Kevin Jackson, as well as staff from the neurology, neurosurgery, physical medicine and rehabilitation, and emergency response (ER) departments at Carle to recruit patients to be a part of the TBI registry, so Rubin and her collaborators can study how TBI affects a wide variety of people, across different spectrums of severity.

“We’re aiming to study the effects of TBI at different stages: from right when they come into the ER, after surgery if they need it, in rehabilitation, or if they’re following up on progress months after the injury,” said Rubin. “Once we have built up a database, we can start to investigate the nature of TBIs.”

Though she’s only just begun this fellowship in collaboration with Carle and the Beckman Institute, Rubin knows it’s a great fit for her.

“I’m really excited about bringing clinical and basic research together. I’ve always enjoyed neuroscience because it allows me to work with people and understand more about the brain and how it relates to behavior and quality of life,” Rubin said. “I want to help improve the quality of life for patients with TBI.”