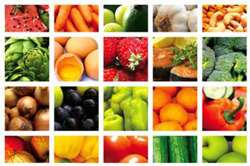 Mounting evidence suggests that diet has a substantial impact on the aging brain; however, the relationships between dietary intake, neuropsychological performance, and neural measures of brain health remain unclear. In fact, although single nutrients have been shown to promote healthy brain aging, clinical trials have largely failed to support such notions. This study aims to advance our understanding of the relationship between diet, cognitive performance, structural indices of brain health, and functional indices of brain health. Data points collected include blood plasma biomarkers of dietary intake; neuropsychological tests of executive function, learning, and memory; voxel-based morphometry of regional brain volume and cortical thickness; diffusion tensor imaging of structural brain connectivity; and resting-state fMRI functional connectivity. The relationships between nutrient intake and this myriad of brain health measures are currently under investigation, along with the consideration of how demographic variables, lifestyle choices, and genetic risk factors for cognitive impairment may mediate the interaction between nutrition and cognition. By using cutting edge technology to capture biological markers of diet, cognitive function, and brain health, the identification of dietary patterns that support healthy brain aging may pave the road to the development of novel nutraceutical therapies for the treatment of the aging brain.

Transient electronics are designed to operate for programmed lifetimes and then degrade, leaving little to no trace behind. Essential to this effort is the development of a new class of degradable substrates that can be triggered to degrade by exposure to a variety of environmental stimuli (e.g., mechanical stress, UV light, pH). Here we present a photodegradable transient substrate made of cyclic poly(phthalaldehyde) (PPA) and a photo-acid generator (PAG). We demonstrate tunable degradation kinetics by varying the composition of the substrate and the irradiance of the UV trigger. Additionally, electronic transistors, diodes, and resistors were fabricated from magnesium and silicon nano-membranes using our newly designed substrate. The functionality of a Mg resistor on this substrate is terminated in as fast as 20 minutes with substantial physical degradation in 72 hours. Transient electronics will be advantageous for biomedical or remote sensing applications where the recovery of a device is cumbersome or not feasible.

The Effects of Deafness on Vision and the Brain 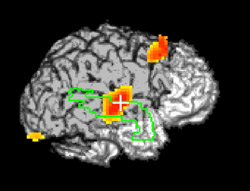 Research has shown that early deafness positively impacts peripheral visual attention. The useful field of view task has previously been used to show that deaf subjects have lower presentation times required for determining the location of a peripheral target. Here we use diffusive optical imaging techniques to explore how deafness alters functional connectivity between visual and auditory cortices. Fast optical imaging allows us to examine functional connectivity between cortical regions with excellent spatial and temporal resolution. Results show that activity in primary visual cortex predicts activity 50 ms later in the posterior STG of the right hemisphere in congenitally, profoundly deaf adults but not in hearing adults. The short time lag suggests either (a) direct functional connectivity between these regions rather than a mediated connection, or (b) a common precursor region that routes neural activity to V1 more rapidly than to the posterior STG (possibly the thalamus). This has implications both for our scientific understanding of plasticity mechanisms and brain organization as well as for clinical uses in therapeutic devices such as cochlear implants and hearing aids. Many individuals struggle to use these technologies, while others use them with great success, and it has been shown that these plastic changes are related to success with CI devices. Our research informs how this interference may occur, and what behavioral changes one might expect related to CI and hearing aid use.