Jean-Pierre Leburton, professor of electrical and computer engineering and full-time faculty member in the Nanoelectronics and Nanomaterials Group, will present on Thursday, September 11 at noon in Beckman room 1005. Lunch will be provided.

The single-atom thickness of monolayer graphene makes it an ideal candidate for DNA sequencing as it can scan molecules passing through a nanopore at high resolution.  Additionally, unlike most insulating membranes, graphene is electrically active, and this property can be exploited to control and electronically sense biomolecules. We show that the shape of the edge as well as the shape and position of the nanopore can strongly affect the electronic conductance through a lateral constriction in a graphene nanoribbon as well as its sensitivity to external charges. In this context the geometry of the graphene membrane can be tuned to detect the rotational and positional conformation of a charge distribution inside the nanopore. We show that a quantum point contact (QPC) geometry is suitable for the electrically-active graphene layer and propose a viable design for a graphene-based DNA sequencing device. 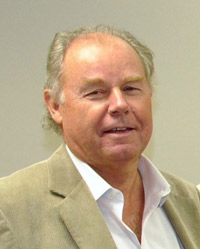 Jean-Pierre Leburton joined the University of Illinois in 1981 from Germany, where he worked as a research scientist with the Siemens A.G. Research Laboratory in Munich. In 1992, he held the Hitachi LTD Chair on Quantum Materials at the University of Tokyo, and was a visiting professor in the Federal Polytechnic Institute in Lausanne, Switzerland in 2000. He is involved with research in nanostructures modeling and in quantum device simulation. His present research interest encompasses non-linear transport in quantum wires and carbon nanotubes, and molecular and bio-nanoelectronics

Leburton is author and co-author of more than 300 technical papers in international journals and books, and served in numerous conferences committees. In 1993 he was awarded the title of “Chevalier dans l’Ordre des Palmes Academiques “ by the French government. He is a Fellow of the Institute of Electrical and Electronic Engineers (IEEE), the American Physical Society (APS), the Optical Society of America (OSA), the American Association for the Advancement of Science (AAAS), the Electrochemical Society (ECS), and the Institute of Physics (IOP). He is also a member of the New York Academy of Science. In 2004 he was the recipient of the ISCS Quantum Device Award, and of the Gold medal for scientific achievement by the Alumnus association of the University of Liege, Belgium. He was a Distinguished Lecturer for the IEEE Nanotechnology Council. In 2011, he was elected to Royal Academy of Sciences of Belgium.