Changing the scientific world, one citizen scientist at a time

The Citizen Scientist Program, conceived by the Beckman Institute, the Institute for Genomic Biology, and the Osher Lifelong Learning Institute (OLLI), brings OLLI members into the labs as research assistants.

By Claire Sturgeon and August Cassens

Sallie Miller is not one to sit still. After her retirement from various positions in the healthcare industry, Miller took the opportunity to invest her time, efforts, and expertise in volunteering.

During tax season, Miller volunteers as an AARP tax aide. Other days, she helps with the State Health Insurance Program (SHIP) to assist people when they have Medicare questions. She’s also on the YWCA board, Presence Life Connections Board, and the American Association of University Women (AAUW) Illinois Board. She participates in a tutoring program called Project READ through Parkland College, and is a Court Appointed Special Advocate (CASA) volunteer.

And then, for one afternoon a week, Miller is also a citizen scientist through the Osher Lifelong Learning Institute (OLLI), a member-driven learning community for people over the age of 50. 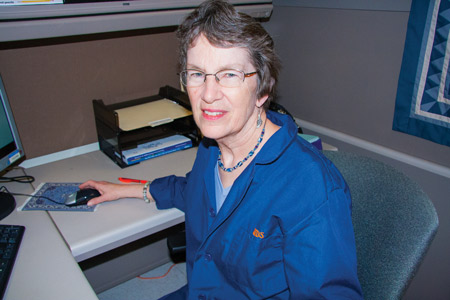 OLLI citizen scientists are matched with scientists at Illinois based on their knowledge, skills, and interests. They volunteer in a lab for several hours every week, oftentimes being delegated their own task to manage for the lab.

“What we appreciate about this program is that it allows our members to explore new areas and make important contributions even after their own careers may be behind them,” said Christine Catanzarite, OLLI director. “That’s a valuable lesson about the importance of lifelong learning.”

The Citizen Scientist Program started in 2009 and has grown to include 15 citizen scientists who are involved in a variety of disciplines and subject areas, from entomology to neurology. Past participants include retired teachers, bankers, gardeners, scientists, and others.

“In a sense, they were all self selected because they all wanted to do something scientific and be part of the scientific community,” said Geena Skariah, who helped manage the fledgling program for two years. “Their personalities may range from very talkative to very friendly to absolutely quiet people, but they all find their own niche in each lab.”

Miller found her niche at the Beckman Institute volunteering for Susan Schantz, who heads the Children’s Environmental Health and Disease Prevention Research Center, which studies whether chemicals in plastics and personal care products alter child development, cognition, or other behaviors.

I know I could be slowing down, but I like doing this. It keeps me active and it keeps my mind sharp. Why wouldn’t I take advantage of that? - Sallie Miller, OLLI Citizen Scientist

In the lab, she assists with calling and recruiting participants and inputting data—a vital task for the center as they’re working to test more than 600 mothers and babies. As all scientists know, there’s a lot that goes on behind the scenes to make science happen, and Miller makes sure this work gets done.

“I like that I can help them in the process of answering some important questions about the role of chemicals in childhood development,” she said. “I like learning about what kind of research is being done, and interacting with the lab members and the other citizen scientists in the lab.”

There are six citizen scientists in the Schantz lab, and they are trained in their specific areas by lab members.

“We are so grateful for our OLLI volunteers. They truly make the wheels turn in our lab so that we’re able to get this work done,” said Schantz. “We have some citizen scientists working with the database and participant scheduling, and some working directly with the participants. We love them—we couldn’t do our work without them.”

Miller and the other citizen scientists in Schantz’s lab play an important role in connecting with the participants.

“Our citizen scientists are all female and they know how to work with mothers and babies from their past experiences,” Schantz said. “It provides a level of relatability and understanding that our students don’t always have.”

Miller has always been invested in learning. She got her undergraduate degree in math and a master’s in industrial engineering. She and her husband moved to Champaign-Urbana in 1976, when he became a professor in the Department of Mechanical Science and Engineering, and she started working in healthcare. She also  helped instill a love of learning in their three daughters, who all received advanced degrees.

“I know I could be slowing down,” Miller said. “But I like doing this. I was interested to see what they were doing, what they wanted me to do, whether I would enjoy doing it or not. It keeps me active and it keeps my mind sharp. Why wouldn’t I take advantage of that?”

Albert Himoe, also a citizen scientist, stands in front of a cluttered lab bench and holds a plastic tube up to the light, looking for the small mass of DNA clinging to the side of the tube. It looks like a dry wad of mucus.

Himoe has spent the last four days preparing this seemingly insignificant speck of genetic material. It contains a special gene that will play an integral role in genetic research on Fragile X Syndrome (FXS), the most common cause of inherited cognitive impairment with 20 to 30 percent being diagnosed with autism.

Stephanie Ceman, a professor of cell and developmental biology and an affiliate with both the Institute for Genomic Biology (IGB) and the Beckman Institute, has been studying this condition since 1997.

Himoe joined Ceman’s lab in 2011. For Himoe, the Citizen Scientist Program was the perfect way for him to put his background in science to work. “Since I wasn’t doing anything in particular, I thought I’d like to keep going,” he said, smiling. “So I signed up.” 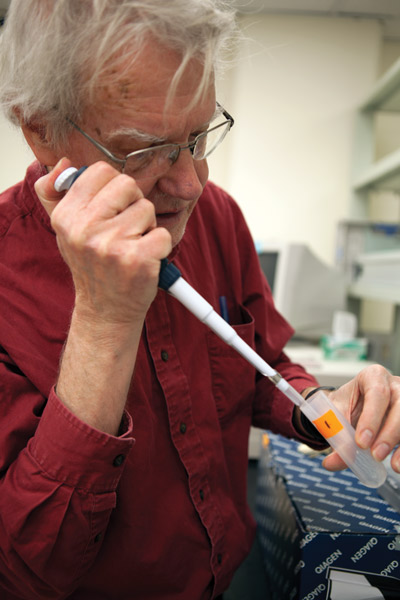 Himoe earned a bachelor’s degree in chemistry from Reed College in 1959, followed by a doctorate in organic chemistry from the University of Chicago in 1964. He completed his postdoctoral studies at Cornell University. Next he studied enzyme mechanisms as a faculty member at Baylor College of Medicine.

Later in his career, Himoe delved into how ancient Romans nourished their crops before modern chemical fertilizers and eventually ended up at Illinois where he worked with an agronomy professor and a physician before he became a citizen scientist in 2011 and was hired as an academic hourly in 2013.

At the age of 75, Himoe has seen firsthand how research has evolved over the years. He began his career back when computers came with punch cards, and calculators only did the most elementary of operations. Before automatic pipets, he used neoprene bulbs to suck up the liquids.

Today, Himoe manages the lab for Ceman. With his cluttered lab bench and paper-covered desk, Himoe has found an academic home in their lab.

“When Albert does these tasks, and we know they are done right, that’s gold,” Ceman said. “That unburdens me, and that unburdens the graduate students, and he does it without complaining.”

Himoe also isolates DNA that contains a special gene called FMR1. For most people, this gene provides the body with instructions to make a protein called FMRP, which is vital for a healthy, functional brain. People with FXS have an abnormal and repressed FMR1 gene so their bodies can’t make the vital FMRP protein.

The FMR1 gene is inserted into the circular DNA of a bacterium, like adding a link to a bracelet. Over a three-day process, the bacterium replicates, creating extra copies of the genes to be used in studies. Once there are enough copies, Himoe isolates the DNA using a commercial kit.

Eventually, Himoe spots the DNA precipitate clinging to the side of the test tube. He carefully removes the excess ethanol with an automatic pipet, an overlooked mainstay of 21st century science.

The four-day process has yielded about a milligram of DNA, which weighs about as much as a paper clip. It’s enough to keep the lab’s FXS experiments going for nearly three weeks.

The small white mass is dissolved with a buffer and poured into an Eppendorf tube. The tube is nestled in a box of other tubes, marked with other dates. Inside each tube are thousands of copies of a special gene, each containing the same secret instructions to understanding cognition, and, perhaps one day, curing FXS.

Any lab or faculty member at the Beckman Institute or IGB can request to have an OLLI member work in their lab, and all OLLI members are encouraged to participate.

“It’s a great opportunity for our members to become a part of the campus research enterprise, especially because the strength of the sciences at U of I is so amazing,” Catanzarite said. “It’s a mutually beneficial relationship—our members get to contribute to important research, and the labs benefit from volunteers who bring different skills and life experiences to their work.”

For more information on how to get involved in this program, contact Claire Scavuzzo.